'sacrifice to their gods' is my first novel. I wrote it because I had known for years that it had to be written. It is Sean's story, a story of an average teenager growing up and discovering that he is gay, in a world where it is totally unacceptable to be gay. It is told in Sean's own voice because it is a story that is far too real to be told by an outsider.

The question that may come to mind is: 'Is it autobiographic?' The answer to that is no. However how can anyone write a novel, especially a first novel, without putting much of themselves into it.

I was born the fourth generation of 'Chicago Irish Catholics' who had emigrated from County Limerick Ireland. And I was raised to be a devout Catholic.

In my early teen years I began to realize that I was gay. Actually homosexual. Queer. Faggot. The term gay came along much later for me.

As time went on, I realized that I could never change the fact that I was gay. I couldn't change being Catholic either, but I could change going to a church that told me that I was condemned to hell simply because of who I was. So I just quit going.

As I matured I began to realize that the people who condemned me were wrong. They had to be wrong. I was who I was because God made me who I was. And I soon realized that there were others out there who believed as I did.

I looked for people who believed as I did and found whole organizations of people who believed as I did. I returned to the church. I didn't go in waving a rainbow flag, I went in just quietly being me. My philosophy was 'Learn to know me by my actions and my beliefs, then form your opinions of me.' I soon found that I was, and am, accepted by most people through my actions and beliefs, in the church as well as everywhere in my life.

I am in a deeply committed relationship that already has lasted longer than most marriages last today. We have never made any formal pledge or legal binder; we are simply together because neither of us could ever imagine NOT being together.

I am doing research for a second, and probably a third novel, but those will be published as they develop into as authentic stories that 'sacrifice to their gods'is. 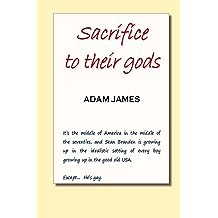 sacrifice to their gods Dec 1, 2013
by Adam James
( 1 )
$5.99
There are many novels that help a young person who is struggling with his or her sexuality learn to accept and deal with who they are. And in most of these stories the main character ultimately finds acceptance. But in real life, that doesn't always happen.

Aimed at growing a more comprehensive understanding, 'sacrifice to their gods' unveils the struggles that one young man faces as he awakens to his sexuality. Facing bigotry and intolerance, he is driven to the very depths of depression and suicide in a hidden world that he barely knew existed.

It is told in Sean's own voice, because it is a story much too real to be told by an outsider.
Read more
Other Formats: Paperback