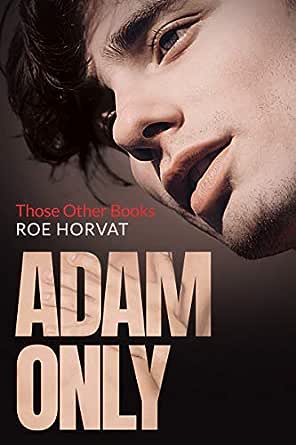 You've subscribed to Those Other Books! We will preorder your items within 24 hours of when they become available. When new books are released, we'll charge your default payment method for the lowest price available during the pre-order period.
Update your device or payment method, cancel individual pre-orders or your subscription at
Your Memberships & Subscriptions
There was an error. We were unable to process your subscription due to an error. Please refresh and try again. 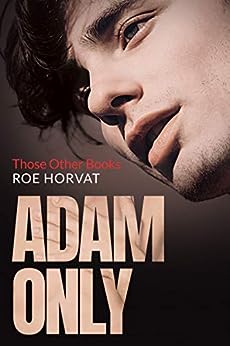 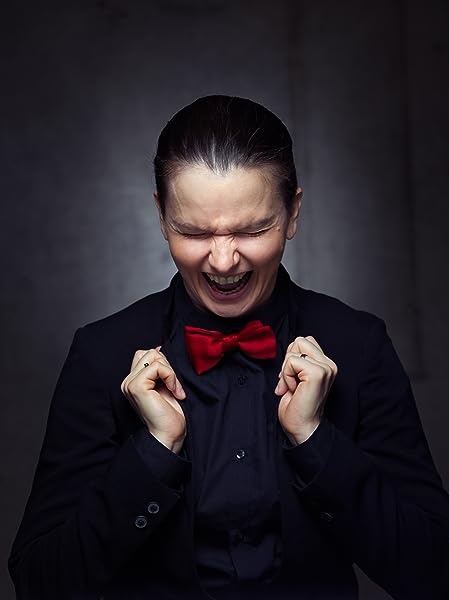 Adam Only (Those Other Books Book 2) Kindle Edition 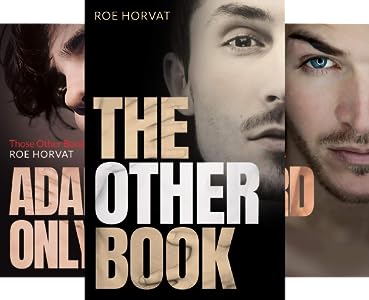 4.6 out of 5 stars
4.6 out of 5
66 customer ratings
How does Amazon calculate star ratings?
Amazon calculates a product’s star ratings based on a machine learned model instead of a raw data average. The model takes into account factors including the age of a rating, whether the ratings are from verified purchasers, and factors that establish reviewer trustworthiness.

However, I knew this going into “Adam Only” as one of Roe Horvat’s “other books.” Horvat has an agenda, and he makes no bones about it: Adam gets what Adam needs. I also knew that Horvat is a romantic creature, and thus I anticipated that the book was not going to simply be a porny collection of scenes of physical intimacy with the barest of narrative ligaments connecting them. Horvat cares too deeply about the personalities of his characters, about the emotional storms they’ve endured, and about working with those critical details to give his tales coherence and weight.

I was never bored during this book. More significantly, I found myself in the position that m/m guru Josh Lanyon once described in her book on how to write a gay romance: aroused and in tears. That’s the ticket.

You see, both Christoffer and Adam are onetime fantasy types of mine, and while they together make a classic example of the “Beauty and the Beast” trope, neither of these two young men comes near to being a stereotype to blunt the impact of their romance. At times in the course of my longish life, I have wanted to be both of these men, so I find I can readily see from both perspectives. Horvat imbues both Christoffer and Adam with great qualities – looks, skills, intelligence – but also curses them with those characteristics that touch me most deeply – vulnerability and insecurity. Each man, in spite of what he knows to be true about himself, feels unworthy of the attention of the other. It is only the sex that draws them together (they both think). The difference there – something neither of them can understand at first – is that what goes on in their heads and hearts sets them both apart. Both Christoffer and Adam assume they’ve not found what they want most through some personal failing, and both have come to accept their fate, however sad it makes them. Once burned twice shy as the American saying goes, and these boys have both been burned.

The clincher that makes this book special, and different, is Horvat’s gift of place: his adopted Sweden is the setting for all his books (well, Germany’s in there, too), and for an American, the physical sense of place as expressive of who the main characters are has a significant impact. Christoffer is seen through the lens of the house he created and the windswept piece of land on which it sits. Adam is seen through the stage on which his dancing bursts forth in all its splendor.

This is not a book filled with high levels of stress – it is a pretty simple romance, rendered piquant because the reader knows everything, and becomes desperate for the resolution we want. Yeah, the intimacy between these men is graphic and extremely well written. (Pause while I fan myself.) It is, however, the tenderness that brings tears to one’s eyes. Therein lies the measure of a man – not just in actions, but in the emotion behind the actions.

HockeyfanT
5.0 out of 5 stars Perfect for each other
Reviewed in the United States on May 30, 2019
Verified Purchase
Adam is sexy, alluring, perfect. Christoffer can't help but to be completely entranced by the much younger man. They come together, and it's magic and passion. Neither can ever get enough of the other. Then they realize that they have a wonderful rapport, even when they aren't in bed (or on the floor, or by the pool, or over the table!) But our sweet Adam has a history that makes him afraid to trust the feelings he has for Christoffer, and they are both in danger of being hurt.
Oh, this couple! Adam is wonderfully heartbreaking, and is so afraid of making the wrong choices. Christoffer has a lovely heart and desperately wants Adam to just let him to care for him. Their sex is off the charts hot, and their feelings are beautiful. These two are perfect together. I needed this couple's story after reading The Other Book, and this is all I could have hoped for. This is very much erotic and very much romantic, and I will read it again and again in the future.
Read more
Helpful
Comment Report abuse

Malene_D
4.0 out of 5 stars This author knows how to write M/M to my hearts desire.
Reviewed in the United States on June 25, 2019
Verified Purchase
With The Other Book and now Adam Only Roe Horvat has become my go to author when it comes to M/M erotic romance.
Adam Only is the story of the 37 year old Christoffer and the 22 year old dancer Adam. They are appear in The Other Book when they already are a couple. Adam Only is the story of how they meet and become more.
Yes, there are a lot of hot sex in this book but it’s filled with so much more. The care and love between Christoffer and Adam is what shines through. They spend a weekend together and slowly gets to know one another. It’s Adam’s past that puts a stop to it but thankfully the heart wants what wants. It’s a quick read that packs a punch.
Read more
Helpful
Comment Report abuse

Gerbera
TOP 1000 REVIEWERVINE VOICE
4.0 out of 5 stars Delightfully steamy novella
Reviewed in the United States on September 15, 2019
Verified Purchase
This was absolutely marvelous e*r*o*t*i*c romance with elements of angst and age gap. The MCs, Adam and Christoffer, after a bit of misunderstanding were not afraid to show their feelings. Despite the fast pace the book was intense both physically and emotionally. There was enough backstory provided to get to know both men and fall in love with Christoffer's gentle nature and s*exy growls and Adam's shy yet at times sassy attitude. And at the same time there were plenty of sweet gestures and romantic moments that made my heart melt. I enjoyed Roe Horvat's storytelling again.
Read more
Helpful
Comment Report abuse

Miareadsbooks
4.0 out of 5 stars Not just Adam
Reviewed in the United States on June 2, 2019
Verified Purchase
There is much to enjoy this story which is sold as erotica but is so much more. I think this is primarily because of the way Roe writes, there's this lyricism to their words that means you're getting more than just a relationship on a page, you're occasionally getting poetry. 4/5 stars ⭐⭐⭐⭐
Read more

I almost fooled myself by thinking I started a nice somewhat regular story. But f, of course not! This author never writes a regular story. They are always exceptional!

Two beautiful men with their own dreams of a perfect life.

MissTGO
5.0 out of 5 stars Perfect mix of heat and softness
Reviewed in the United Kingdom on May 30, 2019
Verified Purchase
Every bit as good as The Other Book. Stands alone. Can be read first also. Although if you've read The Other Book you're going to finish this one and want to run straight back to reread it.

I inhaled this. I woke up at 2.45 the night it came out (because my subconscious wants what it wants!) and i read this gorgeousness in one delicious sitting. So, I'll be tired all day. Worth it.

Adam and Christoffer - lithe dancer and big blond bear engineer - two gentle souls who I fell in love with as they fell for each other.

Neither can believe their luck, neither thinks it can last. Also Adam loves it when Christoffer picks him up and moves him about. As do I - my God! I couldn't love these two more.

Maureen Crothall
5.0 out of 5 stars Sweet Love Story.
Reviewed in Canada on April 13, 2020
Verified Purchase
This book is best described as not just sexy but flipping erotic. I fell in love with Adam and Christoffer, both such sweethearts. Adam is used to being just a fling to other men before, getting discarded after a while and he fears this will happen again, but with how he feel about Christoffer he cannot bear to stay and hear those words, he unwittingly breaks Christoffer's heart. I had read ‘The Other Book’ but did not realize the connection at first. Then I was confused, if this is the same Tyler then where is Joel? Now I realize this story precedes ‘The Other Book’, quite confusing, but both are truly enjoyable, if you like reading about lots of crazy sex.
Read more
Helpful
Sending feedback...
Thank you for your feedback.
Sorry, we failed to record your vote. Please try again
Report abuse

Lisa m06
5.0 out of 5 stars Perfect Horvat
Reviewed in Australia on May 30, 2019
Verified Purchase
I have a soft spot for dancers, I love to hear about the beauty of a human body at its peak as well as the pain to maintain the pinnacle of fitness. More than that I enjoy the rhythm of dance. Adam Only delivers this and so much more. Adam and Christoffer are imperfection. They are adult and sensual.I fell for the quiet steadiness of Christoffer. My heart broke for Adam, needing love. Adam Only is seriously hot and very beautiful.
Read more
Helpful
Sending feedback...
Thank you for your feedback.
Sorry, we failed to record your vote. Please try again
Report abuse