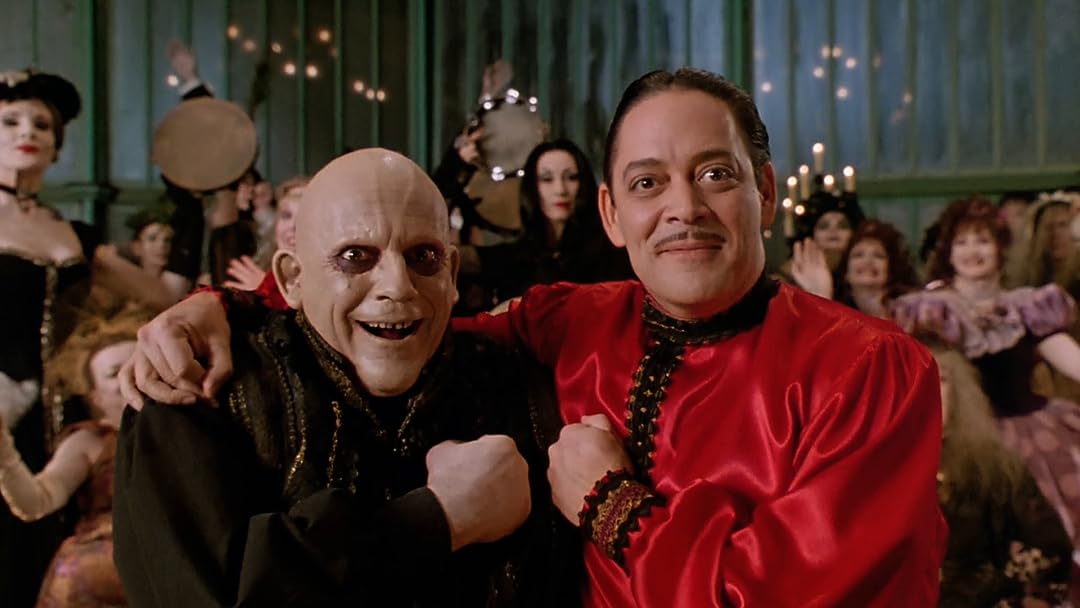 (10,044)
6.91 h 41 min1991X-RayPG-13
When long-lost Uncle Fester reappears after twenty-five years in the Bermuda Triangle, Gomez and Morticia plan a celebration to wake the dead.

SupermansLoisReviewed in the United States on June 24, 2018
5.0 out of 5 stars
Love it, such an enjoyable film to watch.
Verified purchase
OMG I just love this movie! The relationship between Gomez and Morticia is such a beautiful thing to see, definitely relationship goals. I seriously would love to live with The Addams Family, right up my alley LOL. This movie is so much fun to watch, right from the start when they're about to pour hot liquid on a group of Christmas carolers LMAO so funny. Raul Julia, may he rest in peace, did such a fantastic job as Gomez and Anjelica Houston is such a gorgeous Morticia. Obviously Christina Ricci as Wednesday really brought her popularity and still a beloved character for me. Just an enjoyable film even if you've never seen the TV show, which I've seen.
25 people found this helpful

TommysmissusReviewed in the United States on September 22, 2019
5.0 out of 5 stars
Made me laugh. And who doesn't need a laugh these days.
Verified purchase
Never saw this movie. After watching a biography about Raul Julia in which they showed clips of it, I wanted to see it so we rented it on Amazon. I think I smiled throughout the entire movie. It was absolutely delightful.
12 people found this helpful

J. WestReviewed in the United States on April 11, 2019
5.0 out of 5 stars
Don't Torture Yourself Gomez...That's My Job!!!
Verified purchase
This is an old classic 90's film we love and enjoy watching once in a while. I love the actually story. I'm glad they chose to do the role. Christopher Lloyd as Fester, Raul Julia as Gomez, Anjelica Houston as Morticia, Christina Ricci as Wednesday, and the rest of the cast, their performance was fantastic. And I liked that MC Hammer did The Addams Groove. He really thought it through. I enjoy it everytime I watch it. Love the movie.
11 people found this helpful

joel wingReviewed in the United States on October 20, 2020
3.0 out of 5 stars
Light comedy about how the Addams' enjoy pain and suffering and bad days
Verified purchase
The Addams Family was marked by some great casting. Raul Julia and Anjelica Huston as Gomez and Morticia Addams are fantastic. They captured the hot and sultry romance between the two that was in the original TV show. Christopher Lloyd as Uncle Fester and Christina Ricci as Wednesday were other sly choices. Filling out the rest were Dan Hedaya and Dana Ivey as Tully and Margaret Alford who were trying to scam the Addams out of their money which is the plot. Without the right people this movie would not have worked.

As per the TV show the movie was based upon the Addams Family. It’s a light comedy with plenty of jokes about them enjoying pain, torture and terrorizing the Alfords. For instance at their school play Wednesday and her brother Pugsley perform a scene from Shakespeare that includes Pugsley getting his arm cut off and blood spewing all over the first two rows of the audience. It’s hilarious.

The film invokes nostalgia for those that used to watch the TV show and has enough to bring in a new audience as well.

AleksisReviewed in the United States on November 26, 2019
5.0 out of 5 stars
A great film in terms of artistic integrity, immortality, and most of all family in the end
Verified purchase
creatively written, directed, acted, lighting and set up is all brilliant, its a great film for what it is, it spoofs but takes its self seriously and addresses curious psychological issues that could arrive in a person if they were effectively immortal or stuck in a ground hog day or groundhogday life long loop, reliving and never dieing and having a strange almost... purgatorial feel that is at the same time strangely uplifting and meaningful without being dour and depressing, what should depress in this film actually becomes amusing and novel, what should be devestating because of how people treat each other matters more then the fake violence and the ever so clever line at the end of ... are they alive or dead? followed by... does it matter? is a clever reverential comment on how sometimes we dont know if characters at the end of a film are alive or dead, but in this case its also a comment on how either way they dont really care what happens to the characters so long as they dont bother the family again... and thier simply put some implied potential murder, maybe not, just overall its a great film for how it regards life and death not as some great omnipotent force, but raises the question of who we become when death is not some unseen unstopable force, but simply a pleasentry that you can partake of for a moment and then go back to life... its great for its creativity as a film, and the adams family is great for its family values
3 people found this helpful

EmilyReviewed in the United States on July 7, 2018
5.0 out of 5 stars
Such a Great Movie!
Verified purchase
I am a huge fan of the Addams Family, all versions I have seen which include the original TV show, 2 different cartoons, and the 2 movies. I have yet to see the Broadway play. It is interesting to see the different takes on Fester and how he is associated with the family. In some he is the uncle and in others, like this one, he is the older brother. Such a great cast and great performance. It is hard to live up to the original Mortica and Fester but the actors did an excellent job!
3 people found this helpful

chronos099Reviewed in the United States on October 1, 2020
5.0 out of 5 stars
Blast from my childhood
Verified purchase
I loved this when I was little and watching it now, I still love it. The story's entertaining, but what really makes this movie great are the actors. Raul Julia, Anjelica Huston, Christopher Lloyd are terrific playing these characters. A young Christina Ricci as the Addams daughter does a terrific job, giving an early portrayal of the talent she has showcased over the decades since. A few of the effects are dated, but that's to be expected with a 30 yr old movie, and doesn't diminish the enjoyment of this classic film.
One person found this helpful

FrancisReviewed in the United States on August 30, 2018
4.0 out of 5 stars
A fun, goofy movie
Verified purchase
I loved this movie as a kid. Rewatching it as an adult, I still think it holds up well. Morticia and Gomez steal every scene they're in, the actors really selling the parts. It's wonderful. And the house itself is an amazing character. Who watched this movie as a kid and DIDN'T want live in that house?
If you have kids (or adults) who love spooky, goofy movies you really couldn't ask for a better choice.
3 people found this helpful
See all reviews
Back to top
Get to Know Us
Make Money with Us
Amazon Payment Products
Let Us Help You
EnglishChoose a language for shopping. United StatesChoose a country/region for shopping.
© 1996-2022, Amazon.com, Inc. or its affiliates