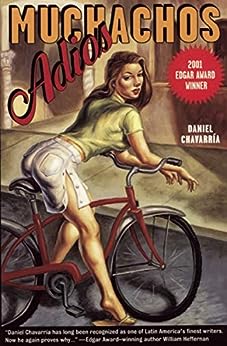 Celebrated in Latin America for his noir detective fiction, Uruguayan author Chavarr!a makes his English-language debut with this fast-paced novel, set in Cuba. Featuring Alicia, a bicycle-riding prostitute, and Victor, a Canadian financier with a shady past and a few current secrets, Adi?s Muchachos spins the tale of a caper gone awry, where no one is particularly bad and everyone is on the take. Castro's Havana has not appeared this sunny in many years, nor have its crooks been this good-natured. There is an accidentally dead Dutch millionaire, a man with a nose so large that he wears a mask to hide it when he makes love, a recipe for smoked eels in mango sauce, and a defective Chinese bicycle. Mixed together, these ingredients make a zesty Cuban paella of a novel that's impossible to put down. This is a great read, recommended for public libraries. Andrea Caron Kempf, Johnson Cty. Community Coll. Lib., Overland Park, KS
Copyright 2001 Reed Business Information, Inc. --This text refers to an alternate kindle_edition edition.

Fun, fast and intelligent, this devilishly charming import gives pulp fiction a good name. Hailed as one of the best Latin writers, Uruguayan-born Chavarr¡a is well known throughout Europe as well as in Latin America. He has won literary prizes around the world, including the 1992 Dashiell Hammett Award; this able translation by Carlos Lopez is the first to bring Chavarr¡a to an English-speaking audience. The story, a madcap caper full of twisted sex, devious schemes and high-rolling hijinks, also showcases Chavarr¡a's considerable scholarly research into prostitution. When Alicia, a crafty, bicycle-riding Havana hooker in present-day Cuba, meets Victor, a convicted bank robber masquerading as an upstanding businessman, they quickly realize each other's mutually nefarious motives and wind up in a business pact that leads to larceny, kidnapping and death. Despite the dark subject matter, the winking delivery provides comic surges as reliably as an amusement park ride. Readers are kept off balance by surprise twists and rolling punches but riveted by the sheer force of curiosity and entertainment. Linguistic and cultural tidbits illuminate the intelligence at work behind the bawdy and raw story, while the narrative reveals the exploitative nature of economic forces at work in Cuba. Lines blur between victim and victimizer as Chavarr¡a reveals a symbiosis in which wealthy foreigners exploit the country's resources (from sunken galleons to beautiful women) and the Cubans in turn exploit foreigners' resources. But Chavarr¡a never loses sight of his goal: to deliver an energetic hustle that will leave readers clamoring for more. (June)Forecast: The campy, vintage-style cover painting featuring Alicia posing provocatively on her bicycle will catch the eye of fans of the pulp genre; a dip between the covers will do the rest.

Daniel Chavarría is a Uruguayan writer with two passions: whores and Classical Literature. His novels, short stories, literary journalism, and screenplays have reached audiences across Latin America and Europe. Chavarría has won numerous literary awards around the world, including a 1992 Dashiell Hammett Award. For years, he was a professor of Latin, Greek, and Classical Literature, devoting much of his time and energy to researching the origins and evolution of prostitution. In 2002, Akashic Books will publish an English translation of one of Chavarría's most celebrated novels, The Eye of Cybele, about an illustrious Greek whore in the times of Pericles. Chavarría lives half the year in his native country of Uruguay and the other half in Italy. --This text refers to an alternate kindle_edition edition.

"Daniel Chavarría has long been recognized as one of Latin America's finest writers. Now he again proves why with Adios Muchachos...." -- William Heffernan, author of Beulah Hill

"Daniel Chavarría is a prince of a fellow, larger than life and twice as much fun." -- LAWRENCE BLOCK, author of Eight Million Ways to Die

"[A] Uruguayan voice so cheerful, a face so laughing, and a mind so deviously optimistic..." -- DONALD WESTLAKE, author of Trust Me on This --This text refers to an alternate kindle_edition edition.
Read more

Amazon Customer
4.0 out of 5 stars Adios Muchachos: A fun book to read.
Reviewed in the United States on October 10, 2018
Verified Purchase
The action is set in Havana, Cuba in modern times. It is very light reading, entertaining and, for the most part, fast moving action. It is an amusing story with some unusual characters both Cuban and foreign. There is an interesting twist in the ending and The Epilogue is very good in finishing off the story.
Read more
2 people found this helpful
Helpful
Report abuse

Kindle Customer
5.0 out of 5 stars Fun
Reviewed in the United States on April 18, 2019
Verified Purchase
A wild romp of a story. Great characters doing bad things and enjoying themselves far more than they should. A nice distraction
Read more
2 people found this helpful
Helpful
Report abuse

Paul Atreides
5.0 out of 5 stars Surprise, surprise
Reviewed in the United States on May 5, 2021
Verified Purchase
To quote Ed Sullivan (Ed who?), Two "really big" surprises . I'll not spoil it for you, but no way did I see the twists coming. The characters are all very fleshed out, the Cuban local is muted. Another favorite author I don't need, but there you go Read it and have fun.
Read more
Helpful
Report abuse

Velia Tome'
3.0 out of 5 stars Adios Muchachos
Reviewed in the United States on May 29, 2014
Verified Purchase
It was somewhat entertaining, but it did not interest me very much. The story line about a beautiful prostitute showing off her beautiful behind on a bicycle to attract customers is kind of original, but the rest of the story is not very appealing. A lot of emphasis on all kind of sexual activities with emphasis on hedonistic pleasures, and it became kind of boring after a while.
Read more
2 people found this helpful
Helpful
Report abuse

Buenoslibros.es
3.0 out of 5 stars A disappointment
Reviewed in the United States on February 5, 2004
Verified Purchase
I had read very optimistic comments on this book and its author in the New York Times for some time, so I finally decided to get into the Latin mood. The expectations were high and the starts very promising, really amusing. But little by little the emotion goes down. It's like you are expecting some twist in the story or something great to happen but there is nothing. It is just that. The story is told in a fast pace but it lack interest, at least to me. Only can I save from drowning this book the gorgeous hips of that belle cuban female, or that's how she seems to me.
As a side note, I should say that the idea of touring Cuba for good and cheap sex -taking advantage of their slavery- is not a laudable one, on which the author doesn't seem to agree.
No problem of conscience?
Read more
5 people found this helpful
Helpful
Report abuse

B. R. Palmer
5.0 out of 5 stars If you are thinking about it, do it.
Reviewed in the United States on September 2, 2002
Verified Purchase
I'm only 1/3 of the way through this but already I know that I'll be buying this for lots of friends. Simply outstanding. There are no great shakes here but as a book to simply amuse and enjoy it can't be beat. Adios Muchachos is so well writen that I have lost all desire to look for deep meaning. It's that rare book that can be simply enjoyed just for the craft that is displayed. Lots of laughs everywhere and quite informative if I'm ever looking for a hooker in Havana. ;-)
I'm looking forward to trying something else from Daniel Chavarria and I feel very sorry for all the folks who gave this book only 1 or 2 stars. I suspect they were offended by some of the setting.
Read more
4 people found this helpful
Helpful
Report abuse

Amazon Customer
5.0 out of 5 stars Funny and a bit suspenseful
Reviewed in the United States on May 8, 2021
Verified Purchase
It was entertaining, and couldn’t put it down. Great story line. Ending was a bit differently so a little surprising as well.
Read more
Helpful
Report abuse
See all reviews

Steffi Fisch
5.0 out of 5 stars .
Reviewed in the United Kingdom on January 19, 2014
Verified Purchase
Very pleased with my new book - excellent and prompt service! I can only wish that everything went as smoothly...
Read more
Report abuse