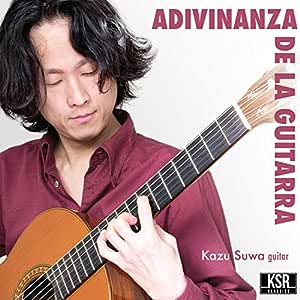 This collection of hidden gems, ranging from Renaissance vihuela works by Milan and Valderrabano, a classical work by Sor, and a guitar transcription of Grieg s romantic piano piece to avant-garde works by Falla and Brindle and flamenco-style works by Angel Barrios, symbolises Kazu Suwa s personal interpretation of Federico García Lorca s poem Adivinanaza de la guitarra (Riddle of the Guitar) as a way to explore the essence of the Spanish guitar. This extensive selection also traces the ever changing music styles and philosophies behind them throughout Renaissance to 20th century while exhibiting the everlasting quality of the Spanish guitar: its warm, vibrant and sensual sonority and lirycism that keeps capturing listeners imagination.

Wide variety of works, ranging from Milán to Brindle, were excellently expressed with the first class interpretation both technically and musically. Finely detailed liner notes in three languages (English, Spanish and Japanese) are very good. This is a recommended disc. --Gendai Guitar Magazine (Tokyo, Japan)

It opens with a trio of slightly solemn 16th century pieces ... then picks up the energy with a lovely rendering of a piece by Sor. Suwa does a fine job on both the lyrical passages and the occasionally speedy runs that require deft and precise fingering. ... Norwegian Edvard Grieg s piano work Ensom vandre... is one of the prettiest pieces on the disc; and British composer Reginald Smith Brindle s El Polifemo de Oro makes for a dour but effective companion to the preceding version of de Falla s Homenaje pour Le Tombeau de Claude Debussy.... The tone of the album then shifts dramatically for the rest of the disc, which is generous selection of pieces by Spanish composer/guitarist Angel Barrios.... Hearing this large concentration of pieces was quite a revelation to me; as I d only heard a few of these in isolation here and there. All are deeply imbued with an appealing Spanish lyricism and romanticism.... There is genuine passion in these works, and the emotions evoked in a ballads like Eloísa and Jardin granadino are profound. I can t tell you why this Barrios works aren t played more than they seem to be, but perhaps this album will help change that. Hats off to Kazu Suwa for presenting such a deep dive into this relatively unheralded repertoire, and so beautifully! --Blair Jackson, Classical Guitar Magazine (USA)