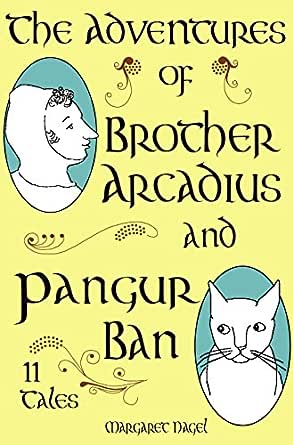 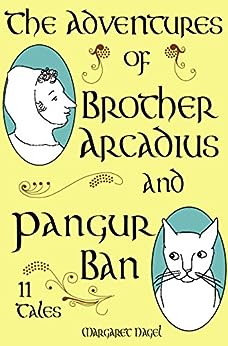 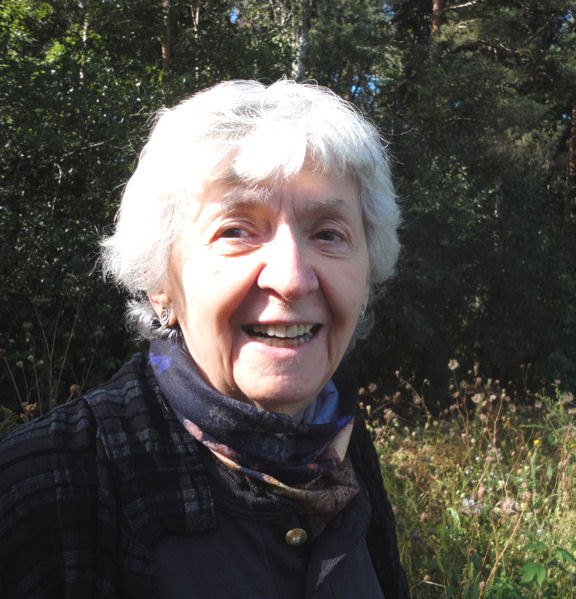 Margaret Nagel is a native and long-time resident of Western New York, and formerly taught there. She received degrees in English and education from the State University of New York at Fredonia. She has three children, and presently lives in Evanston, Illinois. The Adventures of Brother Arcadius and Pangur Ban took shape and gained its final form partly in Evanston and partly in Three Mile Bay, New York, where she spends much of the summer.

"Margaret Nagel delivers a likeable, funny and, above all, believable protagonist in this delightful story brimming with captivating characters. The year is 898 AD. Sixteen-year-old Brother Arcadius, proficient in Latin and Irish and passing fair in Greek and Hebrew, has outgrown the small abbey in Dublin where his widowed mother placed him, feeling that he was too smart and frail to work in the family brick-making business. He sets off on the arduous and dangerous journey by boat and overland to become assistant librarian at Spiritus Sanctus, a much larger monastery housing 150 brothers and over 500 books, near the northern border of Italy. Between bouts of seasickness, the humble monk uses some of his limited "pieces of money" to ransom a kitten that a sailor is about to kill. Arcadius names the sooty cat Pangur Ban, Irish for "white," the color under the soot, and sets the scene for 11 charming tales recounting how a naive young apprentice librarian and an intuitive and "magical" feline influence the lives of the clergy, a noble family, an accused witch, murderers and thieves, and various other travelers. Nagel's prose is crisp and spare, and her word choice facilitates the claim that the book "is written for readers from 12 to 112." While she explains in an addendum titled "An Apology to Actuality" that the story mixes historical fact and fiction, the author paints a lively picture of the times through the actions of myriad characters and situations. (The addendum also notes that Pangur Ban originates from a poem a ninth-century monk wrote about his cat.) Nagel, who drew the book's appealing illustrations, offers enough information so that each story can be read separately, but the clever author has arranged them in chronological order, so that they work even better as an episodic novel. Thankfully, Brother Arcadius is only 20 at the end of the book's final tale. Even though life spans were short in the 10th century that should leave time for many more adventures in what is sure to be a much-anticipated sequel." -- BlueInk starred review (www.blueinkreview.com) --This text refers to the paperback edition.

4.9 out of 5 stars
4.9 out of 5
21 customer ratings
How does Amazon calculate star ratings?
Amazon calculates a product’s star ratings based on a machine learned model instead of a raw data average. The model takes into account factors including the age of a rating, whether the ratings are from verified purchasers, and factors that establish reviewer trustworthiness.
Top Reviews

D. Baumgardner
5.0 out of 5 stars Delightfully Written
Reviewed in the United States on March 19, 2018
Verified Purchase
I went into this book given it's positive reviews having no idea what to expect. What a treat that unfolded! I couldn't get enough of Brother Arcadius and Pangur Ban and the monastery! I could read about their adventures all day long! Who could have guessed such a simple premise for a book set in the first century would contain such intrigue. I would love a second book but sadly did not see another on the author's page. Please, more Bro. Arcadius and more Pangur Ban!
Read more
Helpful
Comment Report abuse

Ellen Schofield
5.0 out of 5 stars Fantastic tale
Reviewed in the United States on December 27, 2017
Verified Purchase
I enjoyed reading this extremely well written book. It seemed like it taught gentle lessons. As a cat owner, the mystique of Pangur Ban left me smiling. I hope to see a sequel soon.
Read more
One person found this helpful
Helpful
Comment Report abuse

book and cat lover
5.0 out of 5 stars Escape to a good place
Reviewed in the United States on September 14, 2017
Verified Purchase
I loved this book and its charming drawings. The pacing was perfect for a good, relaxing read. Pangur Ban was a cat of few words who nevertheless held his own in this book as a character without ever being cloying or cartoon-like. I fell in love with the entire cast of characters here. Throughout all the "adventures" with their perils and villains big and small, there ran a strain of real human (and cat) kindness that was never forced, always natural, and very welcome. You can read the tales as stand-alone stories in their own right or as chapters in a novel, as you choose.
Read more
Helpful
Comment Report abuse

Amazon Customer
5.0 out of 5 stars Rare And Lovely
Reviewed in the United States on September 19, 2016
Verified Purchase
This is a charming, thoughtful story about a memorable and lovable young man. Not quite like anything I've ever read, the book's whimsical illustrations perfectly match its tale. The Adventures of Brother Arcadius and Pangur Ban has the feel of a classic to be enjoyed by wise children and young-at-heart adults. A page-turner, it also strikes me as a book that would be wonderful read aloud. Not to be missed, especially by those who appreciate history, virtue and cats.
Read more
2 people found this helpful
Helpful
Comment Report abuse

RoseBud
5.0 out of 5 stars A very good read
Reviewed in the United States on November 18, 2018
Verified Purchase
Delightful! Enjoyed ever minute of it. The stories of Brother Arcadius and Pangur Ban will make you smile. More than likely these are just takes with some facts woven in. But they are memorable.
Read more
Helpful
Comment Report abuse

Animal Lover
5.0 out of 5 stars Charming, Delightful and Absolutely Enjoyable
Reviewed in the United States on February 23, 2018
Verified Purchase
This book was charming and delightful. It took you back to another time, another world. Totally enjoyable. I read the tales as a bedtime story.
Read more
One person found this helpful
Helpful
Comment Report abuse

Older Woman
5.0 out of 5 stars Magical
Reviewed in the United States on February 8, 2016
Verified Purchase
I didn't want this book to end -- it was magical! An utter delight. I would recommend it enthusiastically to anyone who likes folktales, libraries, charming young men, or cats. Or just a a good story.
Read more
3 people found this helpful
Helpful
Comment Report abuse

Constance Lyman
5.0 out of 5 stars Charming unusual and appealing story
Reviewed in the United States on September 17, 2017
Verified Purchase
This.book was read to me by my husband while I was ill - What a delightful read...we both enjoyed the book emmensely - we fell in love with Brother Acadius enjoying his sense of purity and love of his wise white cat. Would love to read more adventures of the two of them
Read more
One person found this helpful
Helpful
Comment Report abuse
See all reviews from the United States

L O'Connor
4.0 out of 5 stars Delightful stories of a beloved monastic cat
Reviewed in the United Kingdom on November 13, 2016
Verified Purchase
This charming book is inspired by my favourite poem, The White Cat, written by a 9th century Irish monk at an Austrian monastery. Brother Arcadius rescues the cat, Pangur Ban, while travelling from Dublin to the Spiritus Sanctus monastery, where he is to be assistant librarian. Once settled at Spiritus Sanctus, he and Pangur encounter a variety of problems, which are usually resolved with Pangur's help, whether it is a runaway heiress, an ill treated orphan, a missing pouch of valuable spices, the possible attribution of an ancient statue as Saint George, or some other contretemps. The monks at Spiritus Sanctus are all interesting people. from the austere Father Julian, with his passion for chess, to the very strong but very slow witted brother Atalf and Ziegmunt. My only minor quibble is that the monks seem to spend very little time in church, the religious observances which I thought the monastic day revolved around are not much in evidence, prayer is scarcely mentioned. They do however spend quite a lot of time eating, the monastery cook Brother Marcus is famous for his fish paste and his game stew, and is grateful to Pangur Ban for keeping the mice down. Despite their rather secular lifestyle, the monks of Spiritus Sanctus are a likeable crowd to spend time with.
Read more
One person found this helpful
Helpful
Sending feedback...
Thank you for your feedback.
Sorry, we failed to record your vote. Please try again
Report abuse