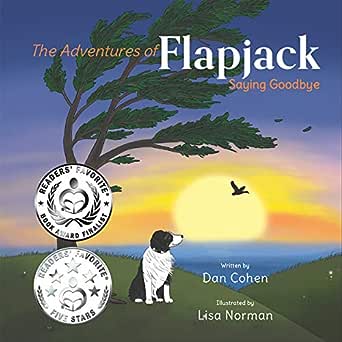 You've subscribed to The Adventures of Flapjack! We will preorder your items within 24 hours of when they become available. When new books are released, we'll charge your default payment method for the lowest price available during the pre-order period.
Update your device or payment method, cancel individual pre-orders or your subscription at
Your Memberships & Subscriptions
There was an error. We were unable to process your subscription due to an error. Please refresh and try again. 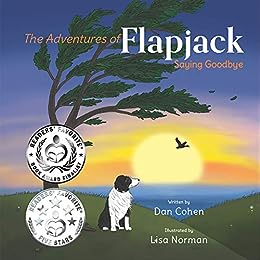 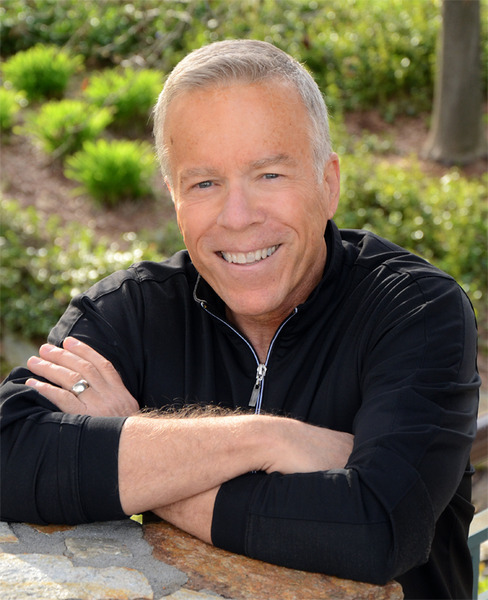 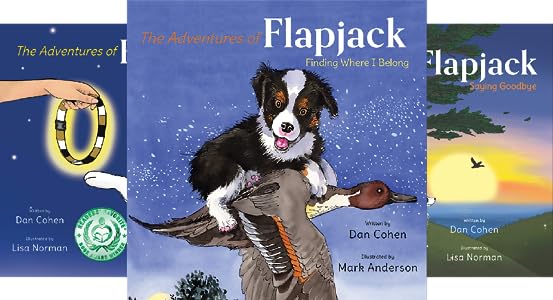 "Dan Cohen's bouncing rhymes and Lisa Norman's lively, heartwarming illustrations make The Adventures of Flapjack one adventurous lesson." - Alysha Allen - Readers' Favorite (5 Stars)
Taking on the serious topic of the loss of a loved one, Dan Cohen and Lisa Norman's third installment to The Adventures of Flapjack, Saying Goodbye, becomes an uplifting exploration of the meaning of life. The story follows the Australian Shepherd dog, Flapjack, who had been rescued by a forest ranger and adopted by his new Mom and Dad. Flapjack enjoys being with his family, but can't help missing his old friend, Fowler the duck. For five seasons, Fowler has not visited Flapjack and he doesn't know why. Then, one day, Flapjack spots a duck in the sky, but it is not Fowler. The Australian Shepherd learns from Fowler's son that his dear friend is close to passing away. Crossing long distances, Flapjack journeys to say goodbye to his friend one last time. It is there he discovers that death is not an ending, but a beginning.

For young readers, these heavy ideas will be easily palatable and might even aid in coping with the loss of a loved one. Dan Cohen's bouncing rhymes and Lisa Norman's lively, heartwarming illustrations make The Adventures of Flapjack one adventurous lesson. At the heart of this tale is the idea that death, like life, is merely another adventure, and that in nature nothing actually dies, but, like the seasons, always returns. And, in that case, one would expect a new best friend for Flapjack to be in the works in the next installment of The Adventures of Flapjack. Meanwhile, kids can connect with and befriend Flapjack the dog on his website or social media accounts listed in the book.

"A beautifully presented and special book for families, and also for teachers, therapists and counsellors who are helping children deal with loss." - Hilary Hawkes - Readers' Favorite (5 Stars)
The Adventures of Flapjack, Saying Goodbye by Dan Cohen is a picture book style story that helps children deal with loss and bereavement through the charming adventure of a lovable dog. Flapjack is an Australian Shepherd dog who loves his duck friend, Fowler. Not a season goes by without visits from Fowler. Then the time comes when he no longer flies in. Flapjack is very sad to learn that his friend has reached the end of his life and will die soon. But Fowler shares his words of wisdom and comfort with Flapjack about the natural cycle of life, the joy of living, and living on in memories and spirit.

This is a lovely, hopeful book to share with a child who has experienced loss or bereavement. I feel it needs to be read aloud with time to look at the illustrations and discuss the story's meaning as it unfolds. It can be difficult for many children to talk about their feelings or fears, and books that gently help them to see they are not alone are invaluable. Flapjack is adorable and children will warm to him and empathize with his sadness at losing his friend. I like the rhyming nature to the text and the way Flapjack gradually comes to terms with his loss and begins to understand that endings and beginnings are all a part of life - and that when loved ones pass away they leave us with special happy memories and a sense of their presence. Using the example of clouds and raindrops nurturing life and growth before being recycled is a good way to explain how everything created has its natural time before passing on to another stage.

Lisa Norman's illustrations complement Dan Cohen's story perfectly. I liked the pictures of the four seasons - a connecting of Fowler's year-round visits with the idea that life events can be seen as seasons that always move on and begin again. The depiction of Flapjack's dream of happy times with Fowler and the clever The...Beginning (as opposed to The End) at the end of the book give it a comforting and hopeful conclusion. A beautifully presented and special book for families, and also for teachers, therapists and counsellors who are helping children deal with loss.

"A very tender-hearted story. Well done!" - Emily-Jane Hills Orford - Readers' Favorite (5 Stars)
Flapjack feels very lucky to have adopted Mom and Dad. Lots of good things have happened to him, like interesting walks. Sometimes, though, Flapjack misses his friends in the forest, particularly a special duck called Fowler. Even after Flapjack adopted his Mom and Dad and went to live in town, Fowler came to visit. Lately, there's been no sign of Fowler and Flapjack is confused. He doesn't understand why. When a duck lands on the pond in Flapjack's backyard, hope arises, but it's not Fowler. It's Fowler's son come to tell Flapjack that Fowler is dying. Flapjack insists on following Fowler's son back to the nest in the forest. When he finds Fowler, Flapjack sees how old and frail his long time friend is and he's very sad. He doesn't understand this 'dying.' Fowler explains that death is a part of life, but it's important to enjoy life to its fullest and keep the memories of happy times and good friends close.

Death is a difficult concept for anyone to understand and accept, but most especially for children. Using his beautiful Australian Shepherd, Flapjack, as a guide, author Dan Cohen created a story around his beloved Aussie to help others, particularly children, accept and try to understand this difficult concept. Dogs have an incredible ability to adapt to any situation and to love unconditionally. Dan used his dog's amazing compassion to create children's stories like The Adventures of Flapjack: Saying Goodbye to help young readers learn and understand. The story is told in rhyme and beautifully illustrated by Lisa Norman, another dog lover. A very tender-hearted story. Well done!