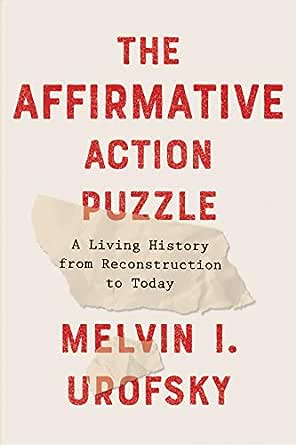 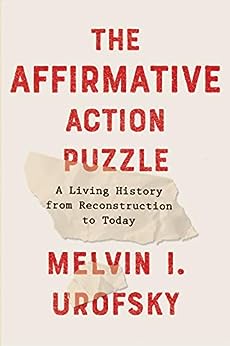 The Affirmative Action Puzzle: A Living History from Reconstruction to Today Kindle Edition

“By the accumulation of sixty years’ worth of evidence, [The Affirmative Action Puzzle] allows us to reach some useful conclusions, and the most important of these is that affirmative action worked.”
—Louis Menand, The New Yorker

“Urofsky leads us to consider how law should best combat the legacies of racism, sexism, and ableism in order to open doors of opportunity to previously excluded groups. A thought-provoking read.”
—Library Journal

“Comprehensive . . . A must-read for anyone interested in the history of affirmative action and its associated legal conundrums.”
—Kirkus

“A magnificent book! The definitive history of affirmative action in the United States. A balanced approach to one of the most controversial legal and social issues, written in a clear, accessible, engaging manner. A ‘must read’ for all interested in the ongoing debate about affirmative action.”
—Erwin Chemerinsky, Dean; Jesse H. Choper Distinguished Professor of Law, University of California, Berkeley School of Law

MELVIN I. UROFSKY is a professor emeritus of history at Virginia Commonwealth University and was the chair of its history department. He is the editor (with David W. Levy) of the five-volume collection of Louis Brandeis’s letters, as well as the author of Dissent and the Supreme Court and Louis D. Brandeis. He lives in Gaithersburg, Maryland. --This text refers to the paperback edition.

Studies of affirmative action often begin with either John F. Kennedy’s Executive Order 10925 or the more important one by Lyndon Johnson a few years later. However, some forms of affirmative action—programs that would open opportunity or provide benefits for groups hitherto excluded—go back to Reconstruction following the Civil War. The phrase itself, though, was never used to describe these programs, nor did there exist a coherent set of governmental policies designed to attack racism and economic discrimination.

In the Civil Rights Act of 1866, Congress declared that “all persons within the jurisdiction of the United States shall have the same rights in every State and Territory, to make and enforce contracts, to sue, be parties, give evidence, and to the full equal benefit of all laws and proceedings for the security of persons and property as is enjoyed by white citizens.” The law also empowered the president to use the national armed forces, if necessary, to implement these provisions and made it a federal crime to interfere with a person’s exercise of civil rights.

President Andrew Johnson had no intention of using these powers, and in fact vetoed the bill, characterizing it as illegal because it contained “a distinction of race . . . made to operate in favor of the colored and against the white race.” Johnson also attacked the measure as race legislation that would encourage a life of wasteful laziness for southern blacks. Johnson’s veto message is worth examining, because in it one can hear the same arguments against affirmative action that will be common a century later.

Johnson disliked the citizenship provision, because it immediately made citizens of former slaves while European immigrants had to wait several years to qualify through naturalization. This “proposed a discrimination against large numbers of intelligent, worthy and patriotic foreigners in favor of the negro.” He opposed federal enforcement of the rights given the freedmen, because it affords “discriminatory protection to colored persons.” These arrangements “established for the security of the colored race safeguards which go infinitely beyond any that the General Government has ever provided for the white race. In fact, the distinction of race and color is by the bill made to operate in favor of the colored and against the white race.” In response, Congress passed the measure over Johnson’s veto. Unfortunately, no president in the rest of the nineteenth century used any of these powers, nor did any of them try to enforce the rights embedded in the Fourteenth and Fifteenth Amendments to the Constitution. Congress passed additional civil rights legislation in 1870, 1872, and 1875 and utilized the occupation army as well as the Freedmen’s Bureau to try to give former slaves access not only to political rights but to economic opportunities as well.

As Congress took steps to provide the former slaves with oppor­tunities previously denied to them, we also see the first indications of what will later be called “white backlash” and “reverse discrimina­tion.” A Florida slaveholder fumed that those who abolished slavery wanted to “give the nigger more privileges than the white man.” In 1874, the Chicago Tribune ran an editorial in opposition to proposed federal legislation prohibiting racial discrimination in public accom­modations. Titled “The Nigger School?,” the editorial asked, “Is it not time for the colored race to stop playing baby?” Justice Joseph Bradley in the Civil Rights Cases accused blacks of seeking preferential treatment by demanding the end of caste-like exclusions. “When a man has emerged from slavery,” he lectured, “there must be some stage in the progress of his elevation when he takes the rank of a mere citizen and ceases to be the special favorite of the law.”

Opposition from whites also greeted the proposed Fifteenth Amendment, which gave blacks the right to vote, and this opposition came not only from the South. Senator James Doolittle of Wisconsin argued that if the former slaves could vote, they could be voted for, and “if they can be voted for, they can be elected members of the legislature, . . . members of the Senate of the United States; generals in your army and . . . they might perhaps in the end elect some Negro as President of the United States.”

In addition to constitutional amendments and civil rights stat­utes, Congress established the Bureau of Refugees, Freedmen, and Abandoned Lands, commonly called the Freedmen’s Bureau. At its beginning, the agency helped both newly freed slaves and white war refugees with housing, employment, food, legal advice, and educa­tion, things that could easily be seen as part of a more modern general welfare program. The original charter ran only one year, but by the time it came up for renewal in 1866, its sole clientele were African Americans, and one scholar claims that its activities “most prefigured the race conscious remedies enacted in the 1960s and after.” The bureau continued to operate under the aegis of the U.S. Army. Its task became harder as southern opposition increased, and it finally went out of business in 1872.

Frederick Douglass, the runaway slave who became an abolitionist leader, is often cited for the proposition that Negroes did not want any special treatment. In lectures to white audiences, he would ask them to let blacks sink or swim on their own and say that character, not color, was all that mattered. “Do nothing with us,” he declared, “and if the Negro cannot stand on his own legs, let him fall also.” But at the same time, he argued that before the black man could be judged on his own merits, the handicaps of years of slavery, little or no education, and lack of experience in self-government had to be erased. Special federal legislation for safeguarding the rights of the freedmen had to be maintained until they were no longer needed. “We certainly hope that the time will come when the colored man in America shall cease to require special attention,” Douglass declared. “But that time has not yet come, and is not even at the door.”

Nor would it be in his lifetime, or in those of his children. In 1883, the Supreme Court severely limited congressional power to protect the former slaves, and thirteen years later approved racial segregation under the rubric of separate but equal in Plessy v. Ferguson. By then, however, the abolitionists and their desire to see justice as well as freedom for the former slaves had passed from the scene. Whites in the North, while they opposed slavery, did not believe African Americans were their social or intellectual equals, and were perfectly happy to let the southern states work out whatever system of racial relations they wanted. Where there had been some protest against the Court’s civil rights decision in 1883, there was scarcely a peep outside black-owned newspapers following Plessy. Race relations played no part in the nation’s policy-making dialogue for the next forty years, until the Great Depression. --This text refers to the paperback edition.
Read more