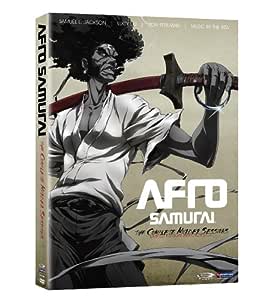 Two of the bloodiest, best-selling and critically acclaimed anime of all time in one supreme collection.

Afro Samurai. A relentless brother wielding an ice cold soul and a jones for revenge. His path is long and violent, and the entire journey so far is now yours to witness

First, the legendary series – Afro Samurai. As a kid, he saw his father slaughtered. Now a man, Afro walks to the mountain where destiny waits on high. The perpetrators must atone, and they’re gonna get what they deserve. Nothing Personal – It’s Just Revenge.

The saga continues in the Emmy-Award winning Afro Samurai: Resurrection. Afro is forced back into the game by a beautiful and deadly woman from his past. She won’t quit until Afro is schooled in the brutal lessons he dealt those who stood in his way. One Brother. One Path. One Thousand Deaths.

- The Director’s Cut features Limited-Edition packaging and over three hours of original extras on 2 discs.