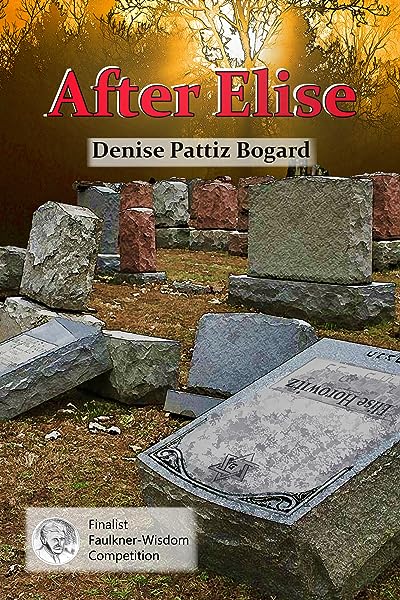 by Denise Pattiz Bogard (Author)
4.6 out of 5 stars 20 ratings
See all formats and editions
Sorry, there was a problem loading this page. Try again.

After Elise by Denise Pattiz Bogard is a novel about unexpected tragedy and how it changes the lives of a dysfunctional family while demonstrating that patience, understanding and forgiveness bring hope.

Imagine this: You are a married mother of two, driving to the grocery store in a storm, changing the radio station, answering your cell phone, when you notice a woman stranded by the side of the road and, on impulse, decide to pull over….

Teri Berger’s car skids in the rain, killing twenty-year-old Elise and leaving Teri reeling with guilt and the rest of her family in disarray as they struggle to adjust to this new reality. Already strained family relationships are tested, and Teri’s marriage suffers, her son withdraws, and her daughter faces a heartbreaking decision.

AFTER ELISE confronts readers with the most everyday tragedy—an accident that could happen to anyone—and its effects, changing the lives forever of everyone involved.

Ultimately, the novel is a story of forgiveness and healing.

After Elise was a finalist in the 2017 Faulkner-Wisdom Writing Competition sponsored by the Faulkner Society.

DENISE PATTIZ BOGARD, author of AFTER ELISE and THE MIDDLE STEP, has been writing professionally for more than 40 years. Her award-winning fiction and non-fiction have been published in, among others, The Oklahoma Literary Review, Newsweek, Lady's Circle, The St. Louis Post-Dispatch, and Teacher Magazine, and two of her essays have been anthologized. Denise earned her MFA in creative writing from the University of Missouri-St. Louis and her BS in journalism and history from Indiana University. Over the years she has been a journalist, a co-founding public relations partner, a certified secondary English/writing teacher, the founder of St. Louis Writers Workshop, and a novelist. Denise lives in St. Louis with her husband. AFTER ELISE has been named a finalist in the Faulkner-Wisdom Creative Writing Contest, novel category.

I’ve worn many hats throughout my writing career, including working as an assistant newspaper editor, as the head of a publications department at a large teaching hospital, and as the co-founding partner of a public relations agency. Twenty years ago, I went back to school to get a master’s degree in fine arts (MFA) in creative writing. From there, I became a certified high school English and writing teacher, and I founded and ran the St. Louis Writers Workshop. But of greatest importance in this bio, I also have pursued and accomplished my lifelong dream of becoming a (two-time) published novelist.

My first novel, THE MIDDLE STEP (High Hill Press, fall 2015) tells the story of a middle-aged white suburban woman who impulsively accepts a job to be a foster mother to four at-risk teenage girls, who have been pulled from their homes. Almost immediately, Lisa Harris discovers how little she knows about urban poverty and living with children of a different race, religion, culture and background. The novel explores the intersection of race, poverty and family-- a topic more important and more timely than ever. While it is a work of literary fiction, this novel draws on my personal passion and experiences of the past 15 years as a writing and English teacher in a Title One charter middle and high school in downtown St. Louis, Lift For Life

My second novel, AFTER ELISE, debuts August 1, 2018, published by Ardent Writer Press. It is the story of a woman whose car skids in the rain, killing twenty-year-old Elise. The tragic accident leaves the driver reeling with guilt and the rest of her family in disarray as they struggle to adjust to this new reality. AFTER ELISE confronts readers with the most everyday tragedy -- an accident that could happen to anyone. Ultimately, the novel is a story of forgiveness and healing. AFTER ELISE was named a finalist in the 2017 Faulkner-Wisdom Creative Writing Competition, novel in progress. As with THE MIDDLE STEP the story is set in St. Louis and the book is literary fiction.

I’ve also been published in, among others, The Oklahoma Literary Review, Newsweek, Lady's Circle, The St. Louis Post-Dispatch, and Teacher Magazine, and two of my essays have been anthologized.

Check out my website for more info, book club discounts, and special promotions: www.denisebogard.com. To pre-order AFTER ELISE visit Amazon.com.

RBaker
5.0 out of 5 stars A Compelling Story - a must read novel!
Reviewed in the United States 🇺🇸 on September 3, 2018
Verified Purchase
How many of us have wondered what would happen if, in one moment, your life changed due to an accident that could have happened to anyone? Our actions, intentional or not, have lifelong effects on not only us, but on those we touch. I loved this book. It is a compelling, tragic, and ultimately hopeful story of a family who is suddenly and shockingly torn by an event none of them could have imagined. The story unfolds revealing first the impact of the event and then the unraveling of each family member as they try to integrate an experience that is painful and heart-stopping. Denise Bogard takes us through the stages of tragedy and grief and shows us how we react and then attempt to rebuild when life presents us with unthinkable challenges. It is simply the best and worst of human frailty and will give every reader the opportunity to examine the part of the human condition that allows us to move forward - to survive. Please read this book!
Read more
Helpful
Report abuse

rebecca carlson
5.0 out of 5 stars Touching Story
Reviewed in the United States 🇺🇸 on August 2, 2019
Verified Purchase
After Elise is a very touching story about a family whose individual lives are thrown in a tailspin after a car accident. As the story unfolds, we see that their lives and relationships were really like a house of cards, and the accident served as a catalyst to force them all to grow. Facts revealed near the end of the book were not expected and even alarming. The characters seemed very real. I liked Bogard's first book, The Middle Step, but I think I like this one even better because it's a bit darker and more intriguing. Some very interesting and fun people in it too, especially the main character's interfering mother!
Read more
Helpful
Report abuse

Chris
5.0 out of 5 stars One moment can change your life. . .
Reviewed in the United States 🇺🇸 on September 21, 2018
Verified Purchase
As we all rush about in our daily lives, it is easy to see how one moment can change your life forever. This makes Denise's book so relatable. We see in each character how a family is impacted, from the husband who wants to help but is pushed away, to the children who are dealing with what is most important to them at the moment - themselves! Along the way we are given insights into Jewish customs and relationship challenges that we can all recognize. Very highly recommend - I couldn't put it down.
Read more
Helpful
Report abuse

Litwriter
5.0 out of 5 stars The many faces of tragedy
Reviewed in the United States 🇺🇸 on February 9, 2019
Verified Purchase
A woman feels responsible for an accident in which a younger woman dies. The premise seems basic, but the narrative is quite the opposite. The author tells a deeply layered story of the tragedy’s aftermath through multiple points of view, affording the reader a nuanced, poignant response to the incident. How does one carry on with life after such a blow? Bogard tells us how in cogent, vivid prose.
Read more
Helpful
Report abuse

Ron
5.0 out of 5 stars .
Reviewed in the United States 🇺🇸 on January 26, 2020
Verified Purchase
Brilliant! Twisting turns, well developed characters, and 😎story I couldn’t put down. After Elise held true from its first word to the very end.
Read more
Helpful
Report abuse

Evan B
5.0 out of 5 stars Two thumbs up!
Reviewed in the United States 🇺🇸 on December 31, 2018
Verified Purchase
After Elise is a great read that does such a wonderful job of interweaving all of the characters together into a very compelling story. It really shows the wide reach that grief has after a tragedy and how we all deal with it differently.
Read more
Helpful
Report abuse

SF
5.0 out of 5 stars Couldn’t put it down!!
Reviewed in the United States 🇺🇸 on August 21, 2018
Verified Purchase
I couldn’t put this book down and felt like the characters were real multidimensional people. Very quick read but thought provoking. Would be great for a bookclub!!
Read more
Helpful
Report abuse

lbg
5.0 out of 5 stars Enjoyed it immensely
Reviewed in the United States 🇺🇸 on June 5, 2019
Verified Purchase
Touching and emotional story. Amazing insight on how it must feel to have even accidentally caused another person's death. Thanks
Read more
Helpful
Report abuse
See all reviews