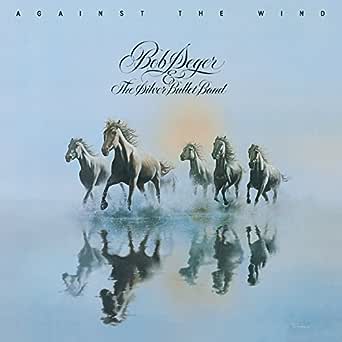 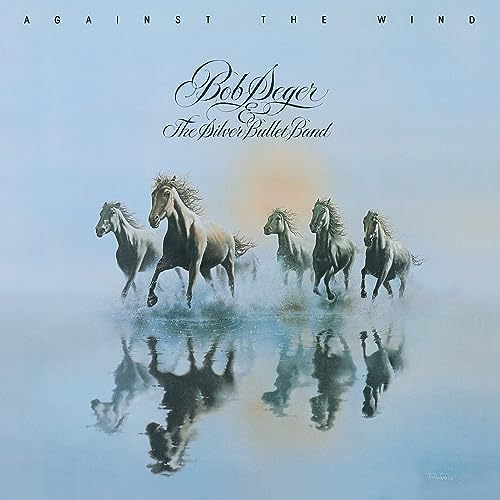 Bob Seger & The Silver Bullet Band
February 25, 1980
4.8 out of 5 stars 551 ratings
See all 31 formats and editions Hide other formats and editions
Buy the CD album for $10.39 and get the MP3 version for FREE.&nbspCD album ships from and sold by Amazon.com. Terms and Conditions. Does not apply to gift orders. Complete your purchase of the CD album to save the MP3 version to your Music Library.

4.8 out of 5 stars
4.8 out of 5
551 global ratings
How are ratings calculated?
To calculate the overall star rating and percentage breakdown by star, we don’t use a simple average. Instead, our system considers things like how recent a review is and if the reviewer bought the item on Amazon. It also analyzes reviews to verify trustworthiness.

A reader
5.0 out of 5 stars One of the best rock albums
Reviewed in the United States on April 2, 2019
Verified Purchase
One of the best rock albums ever, Against the Wind is a delightful listening experience. Bob Seger hit it out of the park with this collection. Highly recommended for anyone who likes that old time rock. Long Twin Silver Line is one of Seger's best rockers, right up there with Katmandu and Get out of Denver. I saw Bob Seger recently in concert on his 2019 farewell tour. He sang four of the ten tracks from Against the Wind, all sounding at least as good as the record. Let's hope Bob and the Silver Bullet Band will occasionally perform in the future.
Read more
6 people found this helpful
Helpful
Report abuse

Jim Snell
5.0 out of 5 stars Bob Seger Against The Wind
Reviewed in the United States on July 24, 2019
Verified Purchase
Album was one of Segers best. The condition of the album was AAA+ This is a replacement album for myself. Do yourself a favor and add Against The Wind to your collection....
Read more
5 people found this helpful
Helpful
Report abuse

David A. BaerTop Contributor: Cycling
TOP 1000 REVIEWERVINE VOICE
4.0 out of 5 stars someday, baby
Reviewed in the United States on November 3, 2007
Verified Purchase
If you had to choose a single voice of blue-collar American rock & roll, you might well settle on Bob Seger's as that iconic sound. AGAINST THE WIND could be Exhibit A as you face down the Springsteens and the Pettys and the Mellencamps make your case.

There are several tracks on this album in which Seger hits his stride and holds it long enough to sound as though he'd have to be invented if he were not available to sing in just this way. 'You'll Accomp'ny Me' is the first of them.

Along with the album's eponymous 'Against the Wind', 'Accomp'ny' is arguably Seger's most well-known tune, but it is not the only one that establishes a subset of his styles as the one that he's come to be known by. 'No Man's Land' is its twin.

Seger fans slot intuitively into a certain, ineffable Seger-esque groove when the SBB gets into its balladic rhythm, setting the table and the stage for Seger to do his best, abbreviated, enigmatic story-telling. Just listen to the Silver Bullet amble up to speed on 'No Man's Land' and you'll know what I mean. Like the best poetry, which tells us enough of its story to allow us to catch hold to one of its horns and merge our own tale with the poet's words, Seger is at his best when he talks to us about the tip of the iceberg. We fill in the rest.

Don't get me wrong. Seger also rocks in formulaic in-your-face mode as well and his music is beloved by fans of that style ('The Horizontal Bop', 'Her Strut'; Long Twin Silver Line' [good grief, the man can sing a half-interesting song about a *train*; what next, a semi-blues, testosterone piece about, say, his desk lamp?], 'Betty Lou'). But we're talking icons here, and Seger the balladeer is Seger the icon. The rest is some very fine window dressing.

AGAINST THE WIND belongs up there on the list of signature albums as well, an observation I'll make as long as I'm in ranking and list-makin' mode. Seger cemented something with this album. It was already there, but this cd plants the flag and says, 'I'm Bob Seger and these are my Silver Bullet boys. 'You got a problem with that?'

Nobody does, of course. The music is too good for makin' trouble.
Read more
18 people found this helpful
Helpful
Report abuse

B Ardell Young
5.0 out of 5 stars BOB SEGER AT HIS BEST!!
Reviewed in the United States on June 19, 2000
Verified Purchase
This is probably Seger's best album/CD. The music is top notch with absolutely no low points. This CD is perfect for the casual Seger listener because the CD delivers a well rounded group of songs that will appeal to everyone.

If you saw a Seger concert during the late 1970s or early 1980s, you will enjoy this CD because it is vintage Seger.

The only improvement would have been to add some of the outtakes from the CD such as Can't Hit The Corners and Sunset.

I also found it hard to believe that Dave Marsh reviewed this album in Rolling Stone and called it Seger's worst record along with being a cowardly piece of work. Marsh is known for his close association with Bruce Springsteen (his wife works with his manager)and hopefully that association did not effect his opinion because Marsh is totally off-base with his comments.
Read more
8 people found this helpful
Helpful
Report abuse

Thomas Billie
4.0 out of 5 stars One for the collection
Reviewed in the United States on October 26, 2019
Verified Purchase
Most of these by Bob Seger I had on albums. And I am collecting now on cd. Seen Bob in concert some years back. He gave a good show then and heard that he still gives a good show.
Read more
One person found this helpful
Helpful
Report abuse

Patti Sommers
4.0 out of 5 stars Damaged package - look/listen immediately
Reviewed in the United States on November 11, 2018
Verified Purchase
Every single CD cover of the four I ordered came severely cracked in at least one corner (2 in each of 2 packages). I crossed my fingers when opening and fortunately the CDs were not damaged. Since I had extra cases it was okay but I deducted one star for the damage.
Read more
One person found this helpful
Helpful
Report abuse

B Ardell Young
5.0 out of 5 stars A GREATEST HITS COLLECTION
Reviewed in the United States on February 24, 2004
Verified Purchase
This album was the high water mark of Seger's career, though many of us didn't realize it. "Against The Wind" was the third of a four album run that permanently established Seger as major force in rock music.
For a while, Seger towered over everyone in rock music, including Bruce Springsteen, but less product, albums and tours, allowed Seger's star to fade leading to an almost has-been perception by the early 1990s.
This album is a brilliant showcase of Seger's talent and a sad reminder of what could have been, if not for missed opportunities.
It is one of the strongest records ever made. There are no "bad" songs and several classic hits. In many ways, it is Seger's third Greatest Hits album.

POSTSCRIPT: Since this review, Seger has released two studio albums and been on tour several times. The only career mark needed is a boxed set similar to Springsteen's "Tracks". Based on interviews since the late 1970s Seger has at least 250 recorded but unreleased songs. Seger has admitted that some songs held off records would have been major hits but they sounded too much like "Against The Wind" and other top songs of the era. Seger has indicated that boxed sets do not interest him but hopefully he will change his mind because it would be a great reward for long time fans.
Read more
32 people found this helpful
Helpful
Report abuse

Lisa
1.0 out of 5 stars Cracked case
Reviewed in the United States on January 13, 2021
Verified Purchase
The case came cracked in multiple places... scared to see what the CD looks like inside... wouldn't suggest going through this seller. I choose a NEW CD... not a used one.
Read more

1.0 out of 5 stars Cracked case
By Lisa on January 13, 2021
The case came cracked in multiple places... scared to see what the CD looks like inside... wouldn't suggest going through this seller. I choose a NEW CD... not a used one.
Images in this review

shag!!!
5.0 out of 5 stars A TRULY BRILLANT ALBUM
Reviewed in the United Kingdom on February 18, 2015
Verified Purchase
mr seger and co at their best this was the 1st album ever given too me.my grandparents ran a hotel when i was a lad and this LP was found after one busy saturday night sometime in 1980 ,left over or forgotten by one of the DJ's who entertained the crowd,my grandparents knowing i loved many pop music band from an early age gave this to me,and after 1st listen i was hooked,the years went by and the LP GOT SCRATCHED AND WORN OUT.eventually as i grew outta this phase and into the next group that would distract my attention,i found my self many years later rediscovering my childhood musical tastes and many a visit to record fairs and car boot sales,i have been looking for this on vinyl ever since.but never finding a unscratched copy.it was last week that i found on this site a U.S IMPORT version on CD ,USED CONDITION AND AT A RUDDY GOOD PRICE I THOUGHT I HAVE THIS-AND GLAD I DID...MEMORY LANE REVISITED!!!
Read more
7 people found this helpful
Report abuse

Alexandre Santos
5.0 out of 5 stars A really great album
Reviewed in the United Kingdom on January 18, 2019
Verified Purchase
A really great album. Listening to it I recovered those forgotten feelings from my youth. Five stars.
Read more
One person found this helpful
Report abuse

S H Billsborough
5.0 out of 5 stars A masterclass in American rock
Reviewed in the United Kingdom on March 9, 2018
Verified Purchase
Sublime
Bought Stranger in Town and Hollywood Nights on vinyl in the early 80s and recently bought the CDs. Against the Wind completes a perfect trio.