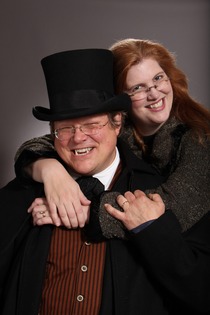 Kaja Foglio is the current Head of the Department of Irrefutably True History at Transylvania Polygnostic University. She first became aware of the power of Creative History while listening to the excuses of her fellow students who had failed to produce their homework. Her doctoral work brought recognition to the long hidden canis operisphagus, or "homework-eating dog" which, as we now now, infests most of our major schools and universities. She first became interested in the history of the Heterodyne family during the infamous "Nymphenberg Pudding Incident" when she was mistaken for Agatha by an angry mob of dessert chefs from whom she barely escaped. Her subsequent research has brought her the grudging acclaim and jealous rivalry of many of her academic colleagues. She enjoys airship racing, Hyrulian Electro-Mechanical Shadow Puppetry and illustrated novels.


Phil Foglio spends most of his time in the field, collecting legends, folk songs, anecdotes and gossip relating to Sparks and their effects on village society and "folk science". This is a bit odd, as he was originally hired by Transylvania Polygnostic University to teach Modern Dance. He first became interested in Heterodyne stories while doing research on simple automatons and was actually present when the Lady Heterodyne unleashed her "Battle Circus" upon Baron Klaus Wulfenbach. Through subsequent research, bribery, and rampant speculation, the professor has managed to fill in a great many of the narrative gaps in the early life of Agatha Heterodyne. He enjoys botany, mechanical illustration, entomology and -in moderation- modern dance.

Start reading Agatha H. and the Clockwork Princess: Girl Genius, Book Two on your Kindle in under a minute.

WitchyD
5.0 out of 5 stars Airships, Traveling Shows and a Talking Cat!
Reviewed in the United States on February 20, 2020
Verified Purchase
I must say, these Agatha H. novels have got everything Steampunk in them and THEN some. This is book #2 where our heroine Agatha escapes the Baron in an airship and meets some circus performers along the way to her ancestral home. Along with her talking cat friend Krosp. And well, lots of interesting things happen along the way.

I'm really enjoying these books! The story is engaging, without dragging, and even though some situations are fairly dire, there is always a fine sense of adventure and fun thrown in. All you could want in a fine Steampunk story of a girl coming of age.

My only question is this: Is this intended to be a post-apocalyptic world set sometime in a far future where Sparks have run amok, or is it an alternative world built with its own rules? Because some of the cities and towns are real, but others are not. Sometimes the history seems to mirror our own, but other times not. The science, while quite bonkers (anyone care for a Jägermonster?) nevertheless seems grounded in real science created by various Sparks and not supernatural in origin.

Ramey Paulsson
4.0 out of 5 stars Movie-Time!
Reviewed in the United States on March 18, 2016
Verified Purchase
Interesting book, but a bit long and off-putting in the last portion. I am not being nasty, I simply feel this particular series does NOT belong on a bookshelf. I believe it desperately needs to be turned into a series of movies. The big screen is the BEST format for Agatha as well as her feline companion. The fantasy and sheer number of characters/creatures involved, as well as the main character(s) and the stories themselves, could truly use a good fleshing out and the best place for that to be found is in the many creative minds of a "certain" type of movie-makers and their crews. This series would be a joy to watch, preferably in IMAX 3D format. There is a LOT of potential here, because of its unique and next to impossible to imagine devices and characters, and, well...EVERYTHING, but PLEASE keep Tarantino (too raw) away from it and target DreamWorks or any company with the budget (it has to be large) and minds (they must all be rarified) to bring out every bit of the drama, whimsey and creativity required to put together this work as it desperately deserves. I don't want to give away a single bit of the storyline, but if this could be turned into a screenplay targeted to a group of "someones" with unique imaginations? The sky's the limit! PLEASE go for it! P.S. NO, I am NOT tied in any way to this author/person, or anyone involved in this series. I am just an average Josephine with an eye towards creating a silk purse where a sow's ear now resides. No offense meant.
Read more
One person found this helpful
Helpful
Comment Report abuse

Brooke N
5.0 out of 5 stars I really enjoyed this book!
Reviewed in the United States on April 12, 2020
Verified Purchase
Agatha H. continues her journey from where the book "Agatha H. and the Airship City" left off in this novel! A worthy sequel! I found it humorous, romantic, exciting, and (in some places when it comes to some parts) super creepy in terms of the villainy - one can only hope that good will prevail but things at times look quite grim! I ached when I finished this book to read the next one! This book is the novelization of a webcomic and this works out really well. Five Stars, I would recommend this book!
Read more
Helpful
Comment Report abuse

Elderflower
5.0 out of 5 stars A Perfect Trifecta
Reviewed in the United States on February 26, 2016
Verified Purchase
Oh, this is a rare and toothsome piece of writing! It is first, beautifully written; second, stuffed to bursting with creativity and inventiveness (it even has footnotes to contain the imaginative arabesques that don't fit into the narrative, and they are choice!); and finally, both absorbing and amusing. It is really, really hard to set it down!

Unlike most of the reviewers here, I was ignorant of the original graphic novels, and tried this volume just because it was bargain-priced. Now, halfway through it, I'm in love -- I've wrenched myself away from my kindle to come and buy the rest of the trilogy.

But, while this volume does very well as a stand-alone, I have realized I'm missing some of the harmonics of its plot convolutions because I haven't read Book 1. So here I am, shelling out big for the other two and panting to do so. This is a 1982 Bordeau of a book, a 5-pound assortment of L. A. Burdick chocolates, a perfect Beef Wellington of a book -- a rare and substantial treat!

K. Wood
5.0 out of 5 stars Excellent companion to the graphic novels.
Reviewed in the United States on January 11, 2020
Verified Purchase
I seriously enjoy the graphicnovelsin the Girl Genius series.
I wasn't a fan of the steampunk genre/movement. I started reading because Phil Foglio does the illustrations (worth it for his illustrations alone). But the series and illustrations have me converted (ok, I also have an attraction to intelligent females

Shepherdess
5.0 out of 5 stars Love the series so far!
Reviewed in the United States on November 20, 2015
Verified Purchase
Okay, I'm still reading this so maybe should have waited to review it, but this series is one of those rare ones which you look forward to reading, don't want to put down, and wish you could leave the responsibilities at hand during the day to get back to find out what's going on....not since the Harry Potter books (and, yes, I'm a young 58-yr-old) have I found books that engage me like that! I thoroughly enjoyed the first Agatha H. book, which I just happened upon in iBooks, and when I had finished it I craved more! So I am not that far into this one, maybe a couple hundred pages (it's VERY thick), and am in no way disappointed! Some steampunk, some innocence in the characters, all fantastic!
Read more
One person found this helpful
Helpful
Comment Report abuse

alexander750
4.0 out of 5 stars If you don't have time for comics…
Reviewed in the United States on April 5, 2015
Verified Purchase
This is pretty much a repackaging of volumes 4-6 of the Girl Genius 'gaslamp fantasy' (aka steampunk) webcomic into novel form. For readers of the webcomic, this will be a familiar story, as Agatha and Krosp join a traveling circus, rescue some Jägermonsters, do various things with (and to) clanks, perform a Heterodyne show or two, meet the latest would-be Storm King, and get their first tastes of The Other's treachery and Baron Wulfenbach's wrath on the road to Mechanicsburg. As with the first novel, there's some additional exposition that wouldn't really fit as part of the main comic.
Read more
One person found this helpful
Helpful
Comment Report abuse
See all reviews

Phil
5.0 out of 5 stars Unexpected
Reviewed in the United Kingdom on June 30, 2012
Verified Purchase
I loved this novel.I love kickass heroines and Agatha is strong and independent,in the middle of nowhere she still did well.
Can hardly wait for the next installment!!!!

Jeffrey Baker
5.0 out of 5 stars Intrigue! Adventure! Mad Science!
Reviewed in the United Kingdom on August 10, 2015
Verified Purchase
An amazing book; real page-turner. A must have for fans of the Girl Genius web-comic or just fans of SteamPunk in general.
Read more
Report abuse