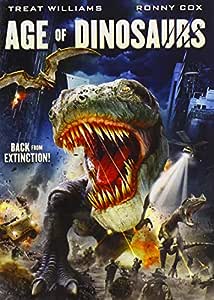 Using breakthrough flesh-regeneration technology, a biotech firm creates a set of living dinosaurs. But when the creatures escape their museum exhibit and terrorize Los Angeles, a former firefighter must rescue his teenage daughter from the chaos brought on by the Age of Dinosaurs

4.2 out of 5 stars
4.2 out of 5
98 global ratings
How are ratings calculated?
To calculate the overall star rating and percentage breakdown by star, we don’t use a simple average. Instead, our system considers things like how recent a review is and if the reviewer bought the item on Amazon. It also analyzes reviews to verify trustworthiness.
Top reviews

booknerd12
1.0 out of 5 stars Makes Sharknado look Oscar worthy...
Reviewed in the United States on September 17, 2018
Verified Purchase
I couldn't even finish this movie - and I like cheesy SyFy movies! The acting was awful, story line - wait, there wasn't a story line, the pathetic special effects, and the fact that it looked like maybe the Director didn't show up to finish the film, all sink this stinker within the first 20 minutes.

The movie started out ok, but once they get into the auditorium to 'meet' the dinosaurs it completely falls apart. As usual, there is a stupid whiny teenage girl that you hope gets taken down as soon as she opens here mouth, or plugs in her headphones. Surprisingly, they forgot to cast the genius shy younger brother. Treat Williams looks lost, and Ronny Cox WAY overacts.

I don't judge these movies by "regular" movie standards. I like these kind of movies for what they are - escapist fun. So I'm not comparing the special effects against a Jurassic Park movie. There just isn't an excuse for releasing this waste of time. Save your money on this piece of junk.

Julia Amiya Messersmith
2.0 out of 5 stars Ridiculous and violent weekend movie.
Reviewed in the United States on October 23, 2019
Verified Purchase
This movie was not horrible, but it is no masterpiece. I like Treat Williams and Ronnie Cox. That's probably why I bought it. I will watch it again. Do I think it would put young boys off liking dinosaurs? I have no idea. I am not a young boy. lol Do not let really young kids see it. No, I do not think they would be good for children's parties. Ronnie was obviously padding his speech.
Read more
One person found this helpful
Helpful
Comment Report abuse

Einsatz
4.0 out of 5 stars "Everyone freeze! No sudden movements!"
Reviewed in the United States on October 12, 2013
Verified Purchase
I've seen much worse, much worse.
Rudimentary at best, this knockoff borrows (steals) from many other films. The plot is a bit sketchy, something to do with bio-technology and medicine. How they got dinosaurs from that is anyone's guess, apparently the loopy CEO (Ronny Cox) thought they were contained/tamed/a novelty for sporting events, maybe even pets! They thought it would be cool to regenerate "meat eaters" first. What could go wrong? Enter a dopey dad (Treat Williams) who thought his daughter would like to attend the dinosaurs coming out party. What could go wrong? They had over 100 dinosaurs to be distributed (party favors?). The trouble starts when Larry breaks out. (Isn't that cute, they named them.) What follows is a lot of atrocious dialog, general all-purpose mayhem, chomping, stomping....... The movie fares best when it doesn't feature any of the characters. When the dinosaurs stampede it's sublime. When the cast try to `act' it's almost painful to watch. They either try too hard or not hard enough, the worst of the lot being Jullian Rose Reed (playing the daughter with a watered down version of an "attitude").
Everything about this movie feels as though they made it up on the spot; no rehearsals, no second thoughts. There are a lot of elements that are just lame.
This was a crap shoot but I liked it for that and the unapologetic way in which they presented it. (I'm sure Ronny Cox and Treat Williams were happy to take the money and run. What does desperation pay these days?)

Fortunately, I have a special place for movies like this in my collection. There's no such thing as having too many.
Read more
3 people found this helpful
Helpful
Comment Report abuse

Kenneth Mason
4.0 out of 5 stars I enjoyed the Movie
Reviewed in the United States on June 10, 2014
Verified Purchase
The Flic has a resemblance to Jurassic Park. A company using DNA to make Dinosaurs. A few of the scenes were graphic, There was a few parts that was a little cheesie. But then what would you do if you were being chased by a Dinosaur. The ending kind of leaves you hanging on. Which makes me wonder if a part 2 is in the works. I would definately watch this Movie again
Read more
3 people found this helpful
Helpful
Comment Report abuse

Eva James
5.0 out of 5 stars Movie was good
Reviewed in the United States on September 20, 2018
Verified Purchase
I liked this movie, its kind of a dinosaur comedy.
Read more
Helpful
Comment Report abuse
See all reviews

Mrs. D. Moncrieff
3.0 out of 5 stars The effects are slightly ropey,but i've seen worse
Reviewed in the United Kingdom on September 3, 2014
Verified Purchase
This is from Asylum pictures.The Dudes that brought us Snakes On A Train and Sharknado,though I do have to say that the past couple of films they've released seemed to have gone for Bigger(ish) Stars.Ving Rhames,Danny Trejo and Michael Jai White to name but a few.Age does this as well,having the great Ronny Cox along with the always reliable and likable Treat Williams.The story though filled with plot holes and contradictions does move at a fair old Whack and throws plenty of Dino's at you to the point that you forget the faults and just enjoy the show.
Read more
One person found this helpful
Report abuse

JOHN
5.0 out of 5 stars Die Hard meets Jurassic Park, 2013-style!
Reviewed in Canada on June 15, 2020
Verified Purchase
Another take on messing with Dino DNA, this time using unfossilized skin to resurrect the long-dead dinosaurs. The genius of man pitted against the Laws of Nature produces similar end results. How does that age-old saying go, "Don't 'F' with Mother Nature! But really, who cares if a few dozen ignorant humans become dino-bait, there really are too many of us, aren't there? Hey, all that aside, these are some pretty cool dinos. There is a herd of Carnotaurs that behave much like JP Raptors, and a giant-sized Ceratosaur that is a good match for T. rex in size and meanness. Then there's a whole menagerie of species in a dino stampede. To finish off the action, a very creditable giant Pteranodon drops in to create its own brand of mayhem. These really are pretty cool dinos, even if there is some similarity to the granddaddy movie of them all. Meant to be enjoyed without going too deeply into the plot. Have fun!
Read more
Report abuse