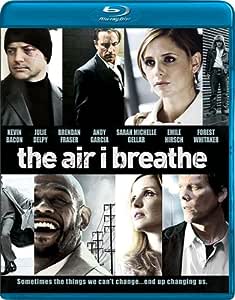 Secure transaction
Your transaction is secure
We work hard to protect your security and privacy. Our payment security system encrypts your information during transmission. We don’t share your credit card details with third-party sellers, and we don’t sell your information to others. Learn more
Details
Ships from
Amazon
Sold by
RapidPrimePros
The Air I Breathe [Blu-ra... has been added to your Cart

Save with Used - Very Good
$8.69
FREE delivery: Sunday, March 7 on orders over $25.00 shipped by Amazon.
Ships from: Amazon
Sold by: CLSolutions

The Air I Breathe [Blu-ray]

Kevin Bacon (Actor), Sarah Michelle Gellar (Actor) Rated:
R
Format: Blu-ray
4.2 out of 5 stars 186 ratings
Available at a lower price from other sellers that may not offer free Prime shipping.

In this powerful film, four very different people on the edge of desperation are unexpectedly linked by their destinies. A top-notch cast featuring Forest Whitaker, Andy Garcia, Kevin Bacon, Brendan Fraser, Sarah Michelle Gellar and Emile Hirsch unforgettably brings to life the stories of a clairvoyant gangster, a rising pop star, an unlikely bank robber and a doctor desperate to save the love of his life. Filled with surprising twists and turns, this suspenseful, action-filled drama employs both brutal violence and aching poetry in a moving exploration of the search for happiness in a gritty urban world.

4.2 out of 5 stars
4.2 out of 5
186 global ratings
How are ratings calculated?
To calculate the overall star rating and percentage breakdown by star, we don’t use a simple average. Instead, our system considers things like how recent a review is and if the reviewer bought the item on Amazon. It also analyzes reviews to verify trustworthiness.
Top reviews

Jerry G
5.0 out of 5 stars The sad fate of life
Reviewed in the United States on December 23, 2014
Verified Purchase
I did not know what to think about this film at first, but after I watched it I liked it a lot. The movie shows different characters in their life roles , from the depressed but hopeful to the cruel and evil who only care about money and to take advantage of other people in the name of money . And there are many real people today that fit the evil role like Andy Garcia, but not in his sadistic ways. So you hate Andy Garcia's character but you like the rest of the people in the movie . The story interacts with all these actors and finishes that way . A movie about people and life , even if a little extreme we can relate and sympathize with the good characters here in the film. Yes I recommend this movie to everyone , rent it , or buy it and enjoy it .
Read more
5 people found this helpful
Helpful
Report abuse

Holly
5.0 out of 5 stars MAYBE NOT FOR ANYONE, BUT I LOVED IT.
Reviewed in the United States on August 30, 2012
Verified Purchase
Man, did I REALLY LOVE this movie. ALL!! the actors were absolutely FABULUS (and the cast is Very IMPRESSIVE) and the twists and turns that wove a story eventually connected all the dots. If I like a movie. I always listen to/watch the commentary, and, in this case, the commentary was as compelling as the movie. And it is SERIOUSLY IMPERATIVE to watch the deleted scenes. An independent movie that is an ABSOLUTE GEM and I REALLY LOVED it.
The director, JIEHO LEE, is a Korean from New York City. He has a double major in cinema studies and an MBA from Harvard. He represents that very well in this movie and that Asian mindset is evident. There is a spiritual aspect in this movie that is not typically American and, very much, has a cerebral element that you won't find in DIE HARD. I thought BRENDAN FRAZIER was especially compelling, but everyone was great. THUMBS UP !!!
Read more
2 people found this helpful
Helpful
Report abuse

John Romeo
1.0 out of 5 stars Brilliant acting in a total waste
Reviewed in the United States on April 7, 2012
Verified Purchase
The film is a poor ripoff of the Oscar-winning film "Crash". Intersecting lives at a non-stop pace in contrived situations. Forest Whitaker, Sarah Michelle Geller, and Brenda Frasier overact excellently in a poor script that never touches us or is believable in any way, even in an allegorical sense. Andy Garcia fumes in an absurd Al Pacino imitation and Emile Hirsch tries his hand unsuccessfully at clowning. Kevin Bacon is not bad at displaying his late-life-in new-found self image of being a loving good guy. At least Julie Delpy with nothing to do didn't look absurd. All in all the picture is a noisy mess, a pretentious, boring, irrelevant depiction about chance encounters in life that the Director seems to think he knows something about. So much talent wasted in a piece of trash - rhymes with bash, dash, cash, rehash, CRASH!!! Avoid it.
Read more
3 people found this helpful
Helpful
Report abuse

Dickens Groupie
4.0 out of 5 stars The Air I Breathe-A Rough Gem for Some Viewers
Reviewed in the United States on June 3, 2008
Verified Purchase
First of all I am biased: I love films that tell stories about lives that impact other lives through small coincidental moments. Another reviewer of this movie used the term "butterfly effect." I automatically give this kind of film three stars even if it is a Tom and Jerry cartoon. Given this bias, I am rating this film four and a half stars because I was quite taken by the theme that tied the four stories together.

The rest is spoiler, so don't read any further unless you have seen the film already.

For me at least, this film was about the monotony and the banality of our lives that are the by product of conformity, routine and safety. Each of the characters in the four stories are leading lives of quiet desparation. Their daily life consists of monotonous routine and they are all emotionally inert.

Each character is protected and "safe" within the framework of their life and each takes a huge risk that catapaults them out of their cocoons into something bigger then their original selves. Through risk, danger, and moments of intense and reawakened feeling, they experience, however briefly,a peak moment of humanity that makes the risk worthwhile even though it may end in death.

The "Happiness" segment is about a stockbroker, a man who jumped through all the right hoops, fit quietly into society, and now live on the verge of despair until the moment he takes a monumental risk, and steps outside his boundaries to spend a glorious hour as a criminal living entirely in the moment, totally alive right up to the moment of his death, having had one brief shining moment of a happiness that bordered on ecstacy.

"Pleasure" gives us a criminal whose life, although outside the law, is equally as boring and banal as the stockbrokers because of its total predictability and unvarying routine. When circumstances destoy his safety net, our criminal experiences pleasure: initially from the experience of pain and subsequently from caring for someone other than himself.

"Sorrow" is the story of an almost-celebrity singer who surrounded by entourage and the insulation of an entatainer's world is also living a life of monotony and banality. With the promise of stardom on the horizen, the singer destroys her safety net by choosing freedom and is awakened to her humanity through fear and sorrow.

"Love" is yet another view of the same theme. In this case a physician who lost the love of his life because he opted for emotional safety and failed to act. The eminent death of his loves pushes him outside his comfortable boundaries and he takes action in ways that would have been beyond the self-efacing ways of his ordinary and monotonous life.

When all is said and done, the film is about breaking boundaries to find a moment of passion and of real humanity, regardless of the consequences. The cast, from the leads to the supporting roles, were all very good, and in some cases outstanding. Actors of the stature of Whitaker, Fraser, Geller, Bacon and Delpy deserve our thanks for accepting parts in small budget films such as these. They bring a good script to life, and provide opportunities for new indie directors.

William R. Myers
5.0 out of 5 stars A film of substance
Reviewed in the United States on August 14, 2008
Verified Purchase
If you like light weight films like "Harold and Kumar go to White Castle "or "Pineapple Express", this film is not for you." The Air I Breath" is a film that explores how our actions affect others, in ways, that we can not begin to imagine. The film follows what happens when a man take an unforseen action that ends in tragety for himself, but ultimately ends in joy for another, through a series of events in the lives of the characters in the film. It starts a little slow, but picks up speed taking you on roller coaster ride of emotion and pathos as you
are involved in the lives of people caught in the slipstream of anothers
seeming random act. The acting was first rate with Fraser, Whitaker, Gellar, and Garcia give outstanding performances. This is the kind of film Hollywood used to be famous for.
Read more
2 people found this helpful
Helpful
Report abuse
See all reviews

Cathal Donnelly
5.0 out of 5 stars Holds a special place in my heart!
Reviewed in the United Kingdom on October 24, 2018
Verified Purchase
It's not perfect, but when I watched this for the first time many years ago, I rekindled with a sense of connection with a multitude of emotions
Read more
Report abuse

MISS S Ryan
5.0 out of 5 stars Air I breathe
Reviewed in the United Kingdom on August 20, 2020
Verified Purchase
Very enjoyable to watch and very good actors in it
Read more
Report abuse

Michael P Crouch.
5.0 out of 5 stars Great Blue Ray
Reviewed in the United Kingdom on October 3, 2013
Verified Purchase
I took a gamble on this film & bought it on DVD but having watched it I soon upgraded to blu ray. This German BD has a very good picture quality and is worth the change. I'm surprised this film isn't better known it's brilliant & unusual with a whole string of fine performances of which three - Brendan Fraser, Sarah Michelle Gellar and Andy Garcia are out standing.
Read more
3 people found this helpful
Report abuse