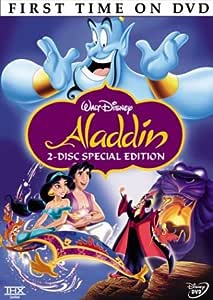 Soar away on a magic carpet ride of nonstop thrills and fun in the most spectacular adventure of all time! Now meticulously restored and enhanced -- experience the wonders of ALADDIN like never before, from the Academy Award(R)-winning music (Best Original Song, Best Original Score, 1992) to the unforgettable moments of sidesplitting comedy and soaring adventure. In the heart of an enchanted city, a commoner named Aladdin and his mischievous monkey, Abu, battle to save the free-spirited Princess Jasmine. Aladdin's whole life changes with one rub of a magic lamp as a fun-loving, shape-shifting Genie appears and grants him three wishes, setting him on an incredible journey of discovery. Through his adventures, Aladdin proves that he is a prince where it truly matters most -- on the inside!

First off, the presentation is a knockout. Restored and cleaned up for the DVD release, the 1992 film looks grand, with the strong color scheme brought to a new level of vitality. The "Disney Enhanced" 5.1 sound is a bit warmer and robust than the standard 5.1 Dolby sound (also included). Disney has honed its ability to present a vast amount of information smoothly. "A Diamond in the Rough," the two-hour documentary, can be viewed three ways: via an index (with the duration of each segment nicely noted), an interactive menu, or a simple one-click "play all" mode. Add the information from the two new commentary tracks (one by the directors and producers, the other--much more amusing--by four character animators), and you can digest that even though Beauty and the Beast may have been more prestigious, Aladdin was much more challenging and fun to animate. A town hall-type retrospective brings together many of the talents to reminisce but, alas, Robin Williams's lack of participation in the DVD is evident (he does appear--in rare form--in the vintage recording-session footage). In a nice change from the usual Disney sheen, the original story that was radically changed is discussed and deleted scenes are shown.

Another spotlight is on the music with four deleted songs on display with their rough animation (which was also deleted). One song, "Proud of Your Boy," receives an orchestral version with none other than Clay Aiken crooning the tune. For the kids, the games are quite lame, but a must-see--on the biggest screen possible--is the Magic Carpet Adventure. Like The Lion King DVD's "Virtual Safari," viewers race through the settings of the movie as if we are on a theme-park ride--without the motion. The adults will want to view it and might be needed to solve the puzzle via some quick inputting from the DVD remote. --Doug Thomas

Page 1 of 1 Start overPage 1 of 1
This shopping feature will continue to load items when the Enter key is pressed. In order to navigate out of this carousel please use your heading shortcut key to navigate to the next or previous heading.
Back
Next
Pages with related products. See and discover other items: aladdin 1992, charlie's angel, disney animated musicals, princess cartoons