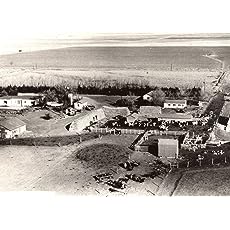 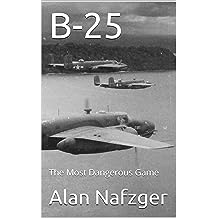 B-25: The Most Dangerous Game Jul 18, 2020
by Alan Nafzger
$0.99
A demented Japanese commander wants to use POWs for target practice. Faced with starvation or execution, the POWs agree to repair a crashed B-25 and take off. However, the Japanese have given them an almost new B-25 and the opposition are training cadets. It's no longer a suicide mission but now it's an escape plan. Although Captain Hughson and Colonel Hagiashikuni have similar backgrounds, they have radically different interpretations of their wartime experiences. Hagiashikuni tells Hughson about his days slumming in the Japanese army, a brief dalliance commanding a the air attack on Hong Kong that ultimately distracted him from his family life. He nevertheless conveniently retains the title of Colonel in a nod to his thirst for power over other individuals’ lives. Pitting Captain Hughson and the B-25 crew and Colonel Hagiashikuni against each other in the hunt allows Connell to blur the line between hunter and prey, human and animal, to suggest that instinct and reason are not as mutually exclusive as people have traditionally thought. Writers and philosophers have traditionally placed human intellect and the ability to reason above the bestial instincts of wild animals, which have no moral compulsions and act solely to satisfy their own needs.
Read more
Other Formats: Paperback 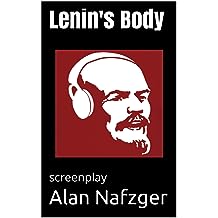 Lenin's Body: screenplay Jun 2, 2019
by Alan Nafzger
$0.99
Two drunks steal the body of Vladimir Lenin the night before it's to be buried in Saint Petersburg. "Nafzger's a master of magical realism in the style of Franz Kafka or Gabriel García Márquez" -- Magical Writers Society
Read more 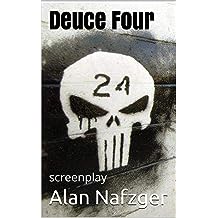 Deuce Four: screenplay May 31, 2019
by Alan Nafzger
$0.99
The 24th Infantry Regiment was a unit of the United States Army, active from 1869 until 1951, and again from 1995 until 2006 and was active in the Battle of Mosul in 2004. During the occupation of Mosul, a 21,000-strong force under General David Petraeus, the U.S. forces made a civil peace with the local Sunni tribes. However, after its pullout, the CIA allied itself almost exclusively with the Kurds, and the U.S. had been seen as essentially another tribal ally of the Kurds, making conflict inevitable.On November 8, 2004, insurgents were conducting coordinated attacks and ambushes in an attempt to take over the city. Units from the 1st Battalion, 24th Infantry Regiment, known as "Deuce Four", fought against the insurgents in the vicinity of the Yarmuk traffic circle, in the heart of western Mosul. The battle lasted throughout the day and the insurgents proved to be both determined and coordinated. The 24th was hammered with mortars while insurgents attacked from the west, east, and south with small arms fire, RPGs, and machine gun fire. As a testament to the intensity of combat that day, a 30-man Platoon (2nd PLT) from Bravo Co. 1st Battalion, 24th Infantry Regiment sustained 9 casualties and 2 out of their 4 Stryker vehicles were rendered useless as RPGs and machine gun fire had taken out their weapon systems.
Read more
Other Formats: Paperback 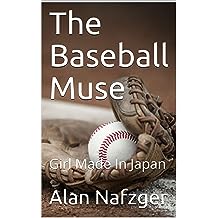 The Baseball Muse: Girl Made In Japan Jul 12, 2020
by Alan Nafzger
( 1 )
$0.99
In ancient Greek religion and mythology, the Muses are the inspirational goddesses of literature, science, and the arts. They were considered the source of the knowledge embodied in the poetry, lyric songs, and myths that were related orally for centuries in ancient Greek culture. The word "muse" can refer in general to anyone or anything which inspires an artist, musician, or writer. However, in this story, the muse heals sick or injured baseball players. THE BASEBALL MUSE - MINEKOThis is the story of a baseball muse. A woman who has an almost magic power to influence baseball players. Mineko is an avid baseball fan. She is actually a baseball professional. She attends every professional baseball game that she can in Japan. She has a secret room in her home with 12 television sets and a satellite feed from every American professional baseball game. She also keeps tabs on semi-professional leagues… even in ones in America.Mineko makes a great living and she is moderately wealthy. He works rehabilitating broken down dysfunctional American baseball players. There are many of them and it is full-time work. Typically the team that owns the player pays her for her service of restoring the player to working order. She speaks fluent English.Mineko developed the “baseball muse” profession from the geisha tradition. She came from a poor rural family and was a geisha from early training. She wanted to become a baseball analyst on television or to work in the management of a team, but her family persuaded her that dream was impossible.Mineko left he parent’s home at the age of five to begin studying traditional Japanese dance at a geisha house in Kyoto. She was legally adopted by the okiya's owner. She had been chosen as the house's atotori, or heir. By age 21, she had earned a reputation as Japan's best dancer and maiko.Mineko always worked herself to her physical and mental limits. As a young woman she entertained numerous Western celebrities and dignitaries and her fame as a geisha grew. This notoriety made her the subject of jealousy and gossip, and she sometimes faced physical harassment when performing and in public.In one scene, she must defend herself with a sharp piece of bamboo from a basket she was carrying when a group of men assaulted her on the street.Mineko became frustrated with the tradition-bound world of the geiko. She later explains that she saw inadequacies in the education system. Mineko unexpectedly retired at the height of her geisha career, age 22.Mineko has transitioned to a career as a baseball muse.Mineko lives in a simple isolated and very rural farming and fishing community. The people live there much like they did 100 years ago. They are very different from the Japanese in Tokyo or any major city. When in the village, Mineko appears to be a simple rural Japanese woman. The village doesn’t have any young people, they are all elderly. It is explained that all the young people have left to move to the large cities.However in reality, Mineko is a very sophisticated jet-set businesswoman. She flies to baseball games in Venezuela, the United States, and even to Cuba. She has retainer contracts with various professional teams. She is paid very well.
Read more
Other Formats: Paperback 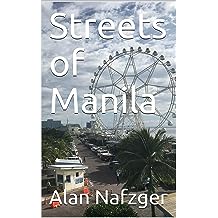 Streets of Manila Jul 9, 2020
by Alan Nafzger
( 1 )
$0.99
PREMISE: When a Mexican drug cartel sends an elite group of hit men to Manila, the Filipino president fights back!
Read more
Other Formats: Paperback 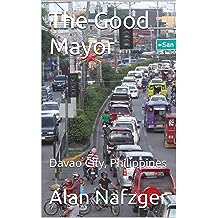 The Good Mayor: Davao City, Philippines Jun 23, 2020
by Alan Nafzger
( 1 )
$0.99
The Good Mayor
Television series by Alan Nafzger
A moral man and good mayor take the helm of a city in the Philippines that is overwhelmed by crime. Because of a weakened and corrupt police force, good citizens must take matters into their own hands and not by becoming vigilantes but by scheming. The mayor, medical examiner, and television mogul orchestrate a ruse to rid the city of its drug gang.
Read more
Other Formats: Paperback 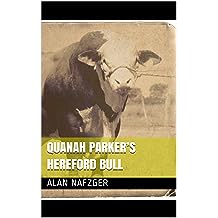 Quanah Parker’s Hereford Bull Jun 1, 2020
by Alan Nafzger
( 1 )
$0.99
There is almost always some nut that gets confused. This is a work of fiction. Names, characters, businesses, geographical places, events and incidents are either historical events or the product of the author’s imagination and used in a fictitious manner. Any resemblance to actual persons, living or dead, or actual events is purely coincidental. While the author has taken some a historical liberties, Quanah Parker did have an expensive bull disappear into Texas.
Read more
Other Formats: Paperback 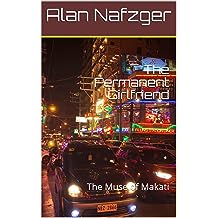 The Permanent Girlfriend: The Muse of Makati May 28, 2020
by Alan Nafzger
( 1 )
$0.99
The COVID-19 quarantine has been incredibly hard on all of Manila; but for Grace, a Makati bar girl, it's an opportunity to escape the sex industry.
Read more
Other Formats: Paperback 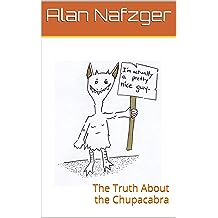 The Truth About the Chupacabra: screenplay Mar 28, 2020
by Alan Nafzger
( 1 )
$0.99
Chaos breaks out in Texas after a biology professor proves the chupacabra are not mangy coyotes, but extremely shy extra-terrestrial beings. Comedy.
Read more
Other Formats: Paperback 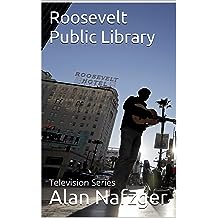 Roosevelt Public Library: Television Series Mar 28, 2020
by Alan Nafzger
( 1 )
$0.99
The “Roosevelt Public Library” is a TV series -- After ten years of legal human cloning, clones are housed in the old Roosevelt Hotel. They can be checked out like library books. Los Angelinos can come to the hotel/library and check-out (borrow) a clone for any number of reasons: problem-solving, murders, rescues, parties and celebrations, etc.I see this television series as a cross between Love Boat (1977–1987) and Murder She Wrote (1984–1996). And possibly a soft version of The Equalizer (1985–1989). Roosevelt Public Library is a science fiction television series, without robots or space travel. It can be filmed without spectacular sets or expense. From 2020 until 2030, it was the policy of the US government to license corporations to clone certain individuals. They contracted with great minds/heroes/celebrities of the decade. After ten years, the experiment in human cloning was a failure, and the program was ended. Now, what to do with the human clones? In this television program, set in 2070, any of the clones can be checked out like a library book. Celebrities can play themselves, forty years in the future. Presumably, the personalities of the 2020s were cloned, and forty years later their adult clones are housed in the hotel.
Read more
Other Formats: Paperback 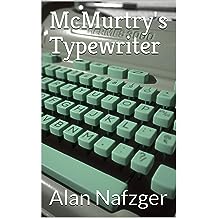 McMurtry's Typewriter Jun 24, 2019
by Alan Nafzger
( 4 )
$2.99
A character so outrageous he could only have come from the ingenious imagination of Alan Nafzger, malicious, mischievous, meth-addicted Texas jurist Judge Judge Bill Stafford has a plan to rid himself of his strange wife and to become a successful writer of Western fiction. McMurtry’s Typewriter is a delightfully dark classic thriller in the bright hot summer sun. Any reader who have experienced Nafzger’s screenwriting will get a charge out of this novel.
Read more
Other Formats: Kindle , Paperback 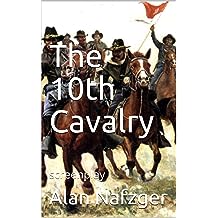 The Buffalo Soldier tragedy of 1877, also known as the Staked Plains Horror, occurred when a combined force of Buffalo Soldier troops of the 10th Cavalry and local buffalo hunters wandered for days in the dry Llano Estacado region of north-west Texas and eastern New Mexico during July of a drought year. The groups had united forces for a retaliatory attack on regional Native American groups who had been staging raids on white forces in the area, during what came to be called the Buffalo Hunters' War. Over the course of five days in the near-waterless Llano Estacado, four soldiers and one buffalo hunter died.Due to the telegraph, news of the ongoing event and speculation reached Eastern newspapers where it was erroneously reported that the expedition had been massacred. Later, after the remainder of the group returned from the Llano, the same papers declared them "back from the dead."
Read more
Other Formats: Paperback