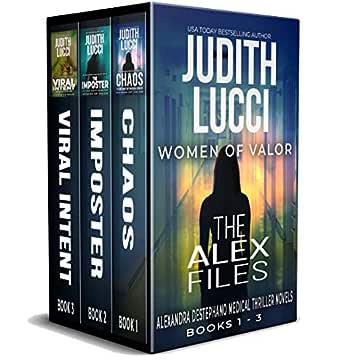 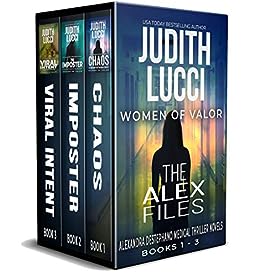 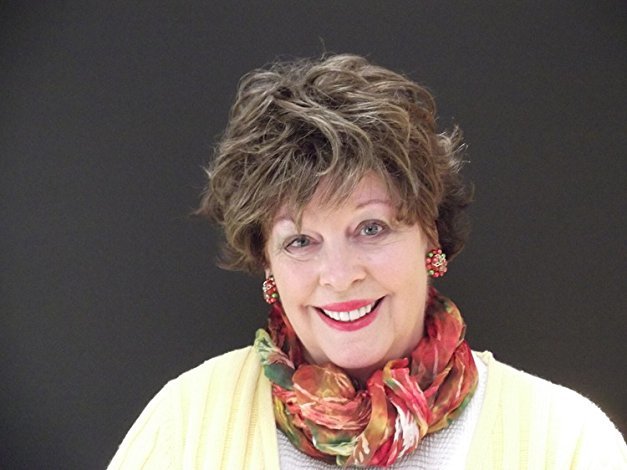 4.4 out of 5 stars
4.4 out of 5
17 global ratings
How are ratings calculated?
To calculate the overall star rating and percentage breakdown by star, we don’t use a simple average. Instead, our system considers things like how recent a review is and if the reviewer bought the item on Amazon. It also analyzes reviews to verify trustworthiness.

Peggy M McAloon
4.0 out of 5 stars Fast-paced Medical Thrillers
Reviewed in the United States on March 18, 2020
Verified Purchase
It's not often I binge read a trilogy. I think the last time was a James Patterson series. We're down on the gulf coast right now, and when I saw the special price on this one, I jumped at the opportunity to learn more about Judith Lucci's writing. Especially since we're within a few hours of one of my favorite destinations: The French Quarter.

I found the writing to be clear, and the main character was a perfect choice. Alex has her law degree from Virginia, plus she has a nursing degree. She is in an ideal position to get the job of the in-house lawyer at one of the best hospitals in the nation. The fact that the hospital is close to the French Quarter allowed me to picture nearly every scene in my head quickly. I visited one of the voodoo stores a few years ago. It spooked me for weeks afterward. The voodoo threat at the hospital had everyone scrambling, including the police chief. When you add Alex's new beau and ex-husband to the mix, things became dicey.

The plot was very engaging. If it hadn't been, I wouldn't have immediately started reading the second book. Whether you've been to New Orleans or have it on your bucket list, this series is a perfect primer for the craziness you can expect to find in every alley and on every street corner. When unknown sources unleash the fear of a voodoo curse on the hospital, Alex needs to employ every asset she can find to stop the panic.

The second book in the medical thriller trilogy brings violence and murder back to the hospital as the psychiatric unit becomes embroiled in the threats to the hospital. Alex Destephano, the hospital lawyer at Crescent City Medical Center, must again work with Commander Jack Francoise to solve the gruesome attacks on staff members and patients in the psychiatric department. With a Hospital Administrator who appears to care more about positive publicity than the safety of his patients and staff, Alex needs to try to resolve the issues and restore the hospital to normalcy. Whatever that might be in a city like New Orleans.

The entire city of New Orleans is preparing for a visit from the President of the United States and members of Congress. Unknown sources release a virulent virus in New Orleans. As the cases begin to mount up, Alex is again at the center of the crisis. She leads the effort to work with the CDC, FBI, and Secret Service to determine who released the unknown agent and whether the impending political rally is the target for a large-scale attack.

Again, because we visit the Big Easy so frequently, I enjoyed the behind-the-scenes look at how the different factions of this city work together. From the standpoint of medical thrillers, I would give this trilogy a 4-Star rating. Yes, there are some editing problems, but nothing that caused me to stop reading. For those who like these types of books, you'll enjoy the mystery and suspense Ms. Lucci weaves throughout her medical thrillers.

Warning: These books do contain some adult graphic content and may not be suitable for all readers.
Read more

Kindle Customer
3.0 out of 5 stars The Alex Files
Reviewed in the United States on May 9, 2020
Verified Purchase
Book 3 was pretty engrossing, but Book 2, The Imposter, was very frustrating to me. The characters' reactions were very exaggerated. A comment that might have a typical person rolling their eyes caused a huge prolonged screaming argument. Jack and Monique, who were newly in love, sounded as if they might murder each other. I read Book 1 quite a while before I received this box set and don't remember it accurately enough to comment on it now.
Read more
Helpful
Comment Report abuse

Las Vegas reader
4.0 out of 5 stars Very different topic but EXCELLENT read!
Reviewed in the United States on March 22, 2020
Verified Purchase
Very different topic for a suspense novel, but so well done. Experience many hospital issues involving everything from administration, employees, patients, all departments - and add to that a mysterious virus. EXCELLENT!
Read more
Helpful
Comment Report abuse

Jackh
5.0 out of 5 stars Intense!
Reviewed in the United States on April 8, 2020
Verified Purchase
Wow, what a ride! Great cast of characters, outstanding location information. An enjoyable read from start to finish (albeit a little too close to home at this time in our world).
Read more
Helpful
Comment Report abuse

Cheryl411
5.0 out of 5 stars Good Medical Mystery
Reviewed in the United States on May 7, 2020
Verified Purchase
I picked this book to read because it’s about my hometown and I love a good mystery. It didn’t disappoint. Caught a few geographical errors about the city but overall it kept my attention with a little bit of everything in it.
Read more
Helpful
Comment Report abuse

Shar1962
5.0 out of 5 stars A winning series!
Reviewed in the United States on October 24, 2019
Chaos at Crescent City Medical Center
The wife of Louisiana's Governor is discovered in her hospital bed unconscious and covered with blood which sends Alex into a battle spiral into the deep, dark belly of the Big Easy barely escaping with her life.

The Imposter
Highly intriguing. There is a psycho on the loose in New Orleans. There has been a gruesome murder in the French Quarter. A nurse has been attacked after she finished her shift at the Psych Ward at a major hospital. An elderly patient is assaulted and killed. Who is responsible? Could it be a psycho patient? Someone posing as a hospital worker? Someone who has reached a crisis and snapped and is roaming the streets of New Orleans?
Judith describes her characters and the Big Easy so well you feel like you live there and know the people involved in the story.
Get your copy and come along on this wild roller coaster ride and find out the answers.
This is one of the novels in Crescent City Chronicles Volumes 1-3 which I have purchased.

Viral intent
Viral Intent is a gripping novel. An unknown virus is on the rampage in New Orleans. A conference is going on for politicians. The president is attending. This story could be tomorrow's headlines. It is a terrorist attack.

All of Judith's novels are well written and fast paced. There is no doubt that Judith has knowledge on the workings of a hospital and the medical field in general. Very good descriptions of her characters, of New Orleans, and of what is taking place. I highly recommend her novels if you like thrillers.
This is one of the novels in Crescent City Chronicles Volumes 1-3 which I have purchased.
Read more
2 people found this helpful
Helpful
Comment Report abuse

sjw
5.0 out of 5 stars Get this set!
Reviewed in the United States on October 12, 2019
I have read the first two books in this set and am looking forward to reading the third. Judith Lucci is a rare gem! She writes medical thrillers that will have you on the edge of your seat. Her characters are well-developed, and her plots are ripped from today's headlines. These are truly exciting reads!
Read more
2 people found this helpful
Helpful
Comment Report abuse

Bammi
5.0 out of 5 stars Another thriller.
Reviewed in the United States on October 22, 2020
Judith Lucci has an interesting, inquiring and strange mind. Her novels are always fun to read and she makes her reader try to figure out what will occur next.
Excellent!
Read more
Helpful
Comment Report abuse
See all reviews

snowdrop36
5.0 out of 5 stars Exciting medical thrillers.
Reviewed in the United Kingdom on March 4, 2020
Verified Purchase
A great trilogy from an exciting author. Alex is a strong woman who is faced with threats to herself and colleagues in the New Orleans hospital. It has a worldwide reputation that is at risk. There are terrorist threats and she is kept at boiling point as the dangers accelerate. These stories will keep the reader enthralled as every page leads them further into into the climaxes.
Read more
Report abuse
See all reviews