You've subscribed to Clans of Kalquor! We will preorder your items within 24 hours of when they become available. When new books are released, we'll charge your default payment method for the lowest price available during the pre-order period.
Update your device or payment method, cancel individual pre-orders or your subscription at
Your Memberships & Subscriptions
There was an error. We were unable to process your subscription due to an error. Please refresh and try again. 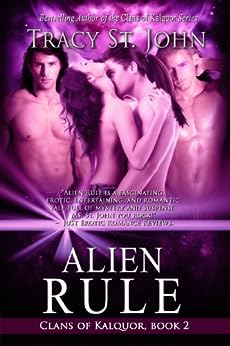 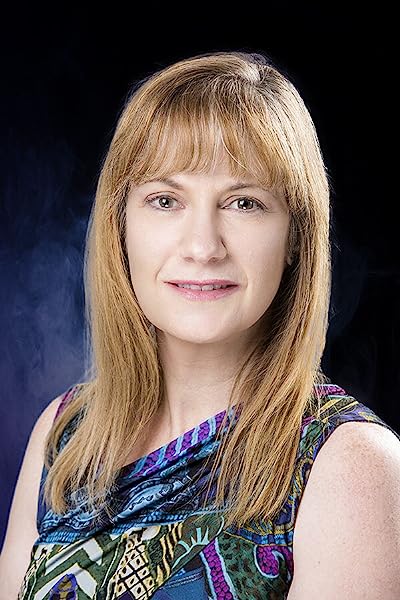 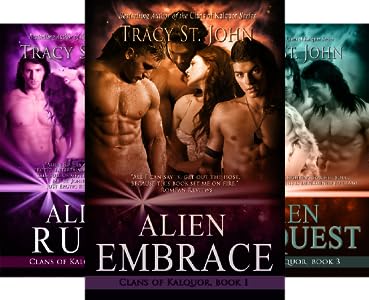 Overall rating: 5 Hearts
This book with its unconventional love story had everything I enjoy in abook. The sexscenes are numerous and thoroughly enjoyable. You may want a nice colddrink on hand.
--From Amy Hopkins at The Romance Studio
--This text refers to an alternate kindle_edition edition.

Tracy St. John lives in coastal Georgia with her husband and son. You’ll often find her haunting train museums with her locomotive-loving son. Besides writing, she has also worked in video production both in front of and behind the camera. She’s usually cast as the gun-toting bad gal, getting handcuffed in the end. She has no complaints. --This text refers to an alternate kindle_edition edition.

Alien Rule is Book 2 in the Clans of Kalquor series.

4.4 out of 5 stars
4.4 out of 5
116 global ratings
How are ratings calculated?
To calculate the overall star rating and percentage breakdown by star, we don’t use a simple average. Instead, our system considers things like how recent a review is and if the reviewer bought the item on Amazon. It also analyzes reviews to verify trustworthiness.
Top reviews

Clara
4.0 out of 5 stars fantastic
Reviewed in the United States on September 4, 2018
Verified Purchase
Jessica was a nurse on an Earther ship that got stuck on another planet. Now she and her friend Michael-Michaela are getting ready to do some belly dancing so that they can attract the Kalquor clans that are there looking for Earther Mataras.

One of the clans she sees when she is dancing doesn't seem to react to her when she's dancing, and when she's off stage she sees two of them talking and laughing about something when they are looking at her, which really hurts her feelings. So she's bound and determined to stay away from them.

After the performance, when she's brought to the leader of the clan, they get their freak on. The next morning, she assumes that they are wanting her to join their clan since that was the point of the performance, but when he tells her that his clan has an arranged Matara that they will be clanning with they return to Kalquor, she gets very, very angry with him because she feels used and terrible, especially since he was her first time. Earth's restrictive government, which would kill her if they could, just for having sex, let alone having sex with an alien, has sent out propaganda for her entire life about how evil having sex outside of marriage is, and now she's done it. So she tells him to get stuffed and walks away.

Lots and lots of really interesting things going on in this book, and I felt so sorry for Norpak.

Trouble
5.0 out of 5 stars Great alien menage series
Reviewed in the United States on July 27, 2018
Verified Purchase
There are reviews on this book that really shouldn't be here. If you don't like the subject matter, why in this universe would you buy this or accept an ARC for it?

I've read other "alien menage" series and I have to say that this series is as good (or better) as any out there. This author's writing is easy to read and emotional in impact. The stories are extremely erotic MFMM and MMM is hinted at but not described in any sort of detail. This is all about the woman and she is most definitely one very lucky lady. The matara of a clan is treated with respect and desire. The men in the clan know that she is the key to the future of their people since there are few females on their planet able to give birth.

If you are new to this genre, give it a try if you are tempted by the subject matter. If it offends you, move onto something else. If you enjoy this series half as much as me, you'll have found your new best read.

Avid Reader
4.0 out of 5 stars To much of the good part
Reviewed in the United States on April 2, 2019
Verified Purchase
I really enjoyed the plot and stories of the two books I have read in this series. The problem is I have to wade through tons on sex scenes to find the story. Seriously the sex scenes in this story are overabundant and repetitive. There is a decent story here if you don't mind reading pages and pages of sex scenes. I felt the girls in this series gave in to easy. There was no real resistance or standing up for themselves. I'm not sure if I will read the next books in this series. The books sound interesting, but getting to the actual story seems daunting.
Read more
Helpful
Report abuse

Kimah74
5.0 out of 5 stars Good book!
Reviewed in the United States on June 22, 2019
Verified Purchase
What a great book! I love the intricate storyline. This author weaves a fantastic story! I love the way Jessica shows her spunk and sass. I love how she did not back down when cornered and even protected herself when she was taken. I am eager to read more of this series!!
Read more
One person found this helpful
Helpful
Report abuse

Amazon Customer
2.0 out of 5 stars Stop pretending rape is sexy
Reviewed in the United States on October 20, 2020
Verified Purchase
I really want to like this series. I’m intrigued by the social construct and the quad relationships. However, that is totally undermined by the multiple rape scenes. No matter how you try to soften it, the heroes rape their future wife multiple times while the author tries to make it ok because the woman comes. If it is against her will, it is rape. I think the author has a poor understanding of the difference between sexy domination and sexual assault. It was a problem in the first book and worse in this book
Read more
Helpful
Report abuse

Kindle Customer
5.0 out of 5 stars Loved this one
Reviewed in the United States on February 13, 2021
Verified Purchase
Jessica is as strong woman, with a good heart. Her friendship with Micheala was great. This one had the romance, but way more action, which I enjoy. I liked this book better than the first in this series.
Read more
Helpful
Report abuse

ReadReviewRepeat
4.0 out of 5 stars Alien Rule: My favorite Tracy St. John
Reviewed in the United States on January 19, 2013
Verified Purchase
If you are familiar with Tracy St. John books, I'd like to recommend this one to you as one of her best.
If you are not familiar, this is a good book to start with even though it's not the first in the series.

The story starts with two Earther dancers on the Plasnian planet who attract the attention of a couple of Kaloquian clans. Jessica soon finds herself tangled with each member of the clan only to learn that they are promised to someone else. There's a lot of back and forth "convincing" done between Jessica and the clan: She "convinces" them to want her with her dance, they "convince" her to join a clan, and then they all convince (this time, no hidden meaning) the Kaloquian government that Jessica belongs with the clan. The scenes are hot and appropriately timed. It keeps you reading.

Again, I skimmed over a lot of the political banter toward the end. St. John tends to load up in the last 20 pages or so.

Amazon Customer
4.0 out of 5 stars Good to the last drop
Reviewed in the United States on November 26, 2013
Verified Purchase
Alien rule picks up very well from where Alien embrace left off. However, with this installment St. John shows a more confident and self aware protagonist in Jessica. I also loved the new personalities in the Kakquor. Way to keeping us on our toes Tracy. I am now very much invested in this series and look forward to the next installation. I personally enjoy the sex scenes as I find them complementary to plot as opposed to overly done as other readers have said. But hey, to each his own. These Kalquor men can tie me up, gag and spank me anytime they want.
Read more
One person found this helpful
Helpful
Report abuse
See all reviews

CAT
5.0 out of 5 stars Answer For Little Miss Bookworm
Reviewed in the United Kingdom on December 27, 2013
Verified Purchase
Please re-read the book Little Miss Bookworm. Jessica is not a hermaphrodite, Michaela is. Your book review is so very wrong and should be removed from the reviewers list. I enjoyed the easy flow of the story that builds up into an interstellar incident. Alien Rule is yet another tasty morsel of what is to come in the rest of the series. If you don't like steamy sex or you don't like books that push boundaries then be warned, because the men in this tale are so hot, it makes Death Valley look like an Iceberg.
Read more
One person found this helpful
Report abuse

Ekprima
5.0 out of 5 stars Another one for Little Miss Bookworm
Reviewed in the United Kingdom on July 7, 2014
Verified Purchase
I'm not sure where Little Miss Bookworm got the impression that Jessica was also a hermaphrodite. The only person mentioned in this book with this condition is Michaela. Her review is very misleading.

Having said that, I thoroughly enjoyed this book. I loved Jessica's attitude. Her story was very interesting. On to read the next one.

KK
5.0 out of 5 stars Brilliant series
Reviewed in the United Kingdom on July 31, 2014
Verified Purchase
Love this book but bought previously from amazon under similar title of Alien Rule (Kalquor Book 2), so a bit annoyed.
Still a great continuation to a great series.
And I love shaliasdiary.blogspot
Read more
Report abuse

Helli
5.0 out of 5 stars A great read
Reviewed in the United Kingdom on July 28, 2013
Verified Purchase
Alien Rule is one of my favourite books, Super sexy Aliens, fighting for the love of there lives who could ask for more. Well recommended .
Read more
Report abuse

D. Weston
5.0 out of 5 stars Alien Rule
Reviewed in the United Kingdom on January 24, 2014
Verified Purchase
Another good story line in this Kalquor series. Have enjoyed each in this series, well-considered, full characters. Long may they come!
Read more
Report abuse
See all reviews