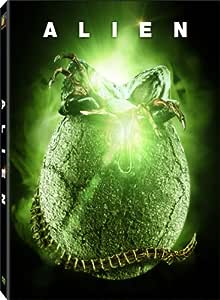 The terror begins when the crew of a spaceship investigates a transmission from a desolate planet, and discovers a life form that is perfectly evolved to annihilate mankind. One by one, each crew member is slain until only Ripley is left, leading to an explosive conclusion that sets the stage for its stunning sequel, "Aliens."

4.3 out of 5 stars
4.3 out of 5
304 customer ratings
How does Amazon calculate star ratings?
Amazon calculates a product’s star ratings based on a machine learned model instead of a raw data average. The model takes into account factors including the age of a rating, whether the ratings are from verified purchasers, and factors that establish reviewer trustworthiness.

Decker
5.0 out of 5 stars A dark gritty Sci-Fi/Horror that still holds up well
Reviewed in the United States on April 7, 2013
Verified Purchase
This movie has had a huge impact on horror and science fiction movies since it's release. Its not hard to see why. Set in the distant future when mankind has gained the technology to travel space a freighter ship the Nostromo is drifting back home when it suddenly diverges from it's original destination to answer a distress signal from a remote world. Much to the dismay of the crew who was expecting to get back home. When they land on this desolate planet they unintentionally bring an alien life form onto their ship. When this alien beast begins dragging them off into the dark bowels of the Nostromo the crew is almost completely helpless as they don't have any weapons and learn that the company they work for has abandoned them as expendable assets.

The movie still looks pretty good, being made decades ago however it does look very aged especially in the special effects department. But it's still impressive what the effects crew was able to pull off given the lack of CGI at the time. The alien itself is beautiful (in a horror monster sense) and raises hairs whenever it's seen lurking around on screen. The set fits the mood and feels claustrophobic which only adds to the realism. Since many other Sci-Fi movies at the time and up to now depict starships as sleek and shiny with their clean cut crews. Instead the cast is crammed into this crude looking ship like a submarine crew. The dialogue between the crew mates is believable and well acted. This is in my opinion Sigourney Weaver's best movie.

One of the best Sci-Fi movies ever made and even if you don't really like the genre is definitely worth a watch even if it's only once. I won't ever forget watching this for the first time as kid with my older siblings. Especially when I watched the famed dinner scene which is easily the most shocking cinematic moment I've ever seen. Five stars all the way.

Flight Risk (The Gypsy Moth)
5.0 out of 5 stars Even Hollywood thinks this is No.3 of 100 all-time best
Reviewed in the United States on July 18, 2006
Verified Purchase
I succeeded in avoiding this movie when it first came out, but it caught up to me that next year as I was cutting through the student center at my college on my way to the library. Didn't get the paper I was working on written that night; I sat down in one of those ugly orange chairs that furnish such places, and gradually disappeared downward as the movie worked its magic. I don't do horror pictures as a rule, but "Alien" is without doubt so much more - class at its best. As I write this, "Nova" is on, discussing the possibility of extraterrestrial life, in fairly sunny terms. "Alien", the other side of the coin, postulates that things could be quite different out there. Everybody here isn't nice; what makes us think we're going to find the Friendlies elsewhere?

The movie starts on a dark, eerie note. The mining ship Nostromo,apparently having been out for an extended period of time, is on its way back to Earth, with its weatherworn crew asleep. The ship intercepts a communique of indeterminate origin which it initially interprets as a distress call and wakes up the crew to investigate. What nobody discovers until too late is that the Company has been looking for the source of this communique for some time in its own mercenary interests, without regard for the possible consequences of making contact.

The crew breaks off from their return home to follow the Company's directive, but with a lot of dissention amongst the ranks. These are people who are already tired of each other's company, so this just gives them more to argue about; but Ripley (Sigourney Weaver, in the role that pretty much defined her), partially decoding the communique, susses out too late that it's a warning - not an SOS. She argues unsuccessfully to quarantine the crew member who ends up infected by what the search party finds on its visit to the alien ship that sent out the message, and the Nostromo becomes an unpleasant place to be after that.

The original poster for "Alien" had the caption: "In space no one can hear you scream." This was the first movie of its kind that ever made me leave the light on - a full grown intrepid human being - the night I saw it. I was scared to go home in the dark, even. And I've got to tell you - Iim not sure I want to know what's out there. I'm of the opinion that if somebody can come up with a concept, it's possible.

This film is a classic and should be in every movie library, whether you like horror movies or not. It is so well done in all regards, it deserves a place of honour on the shelf.
Read more
11 people found this helpful
Helpful
Comment Report abuse
See all reviews from the United States

DAG
1.0 out of 5 stars Rubbish
Reviewed in the United Kingdom on November 30, 2018
Verified Purchase
It was in Spainish!- I sent it back
Read more
Helpful
Sending feedback...
Thank you for your feedback.
Sorry, we failed to record your vote. Please try again
Report abuse

sean paul mccann
4.0 out of 5 stars nice
Reviewed in the United Kingdom on June 8, 2009
Verified Purchase
i bought this old classic last week and i recieved the steelcase edition which was pleasing,its what i thought i was getting but was aware as some other reviewers have stated that they got a slipcase instead,anyway,the steelcase looks good and the dvd has lost none of its class,i dont notice anything really different but its nice to have a so called definitive version,well until the next one pope along.
Read more
3 people found this helpful
Helpful
Sending feedback...
Thank you for your feedback.
Sorry, we failed to record your vote. Please try again
Report abuse

J M
5.0 out of 5 stars STEELBOOK EDITION!!!!! EXCELLENT
Reviewed in the United Kingdom on March 6, 2012
Verified Purchase
AFTER READING THAT SOME PEOPLE DID NOT RECIEVE THE STEELBOOK I WAS NOT PUT OFF. BUT WHEN THE DVD ARRIVED IT WAS TO MY SURPRISE THAT I RECIEVED THE STEELBOOK EXCELLENT CONSIDERING THESE ARE RARE AND OUT OF PRINT. THANKS AMAZON WHERE DO YOU GET IT FROM. SPACE!!!!
Read more
Helpful
Sending feedback...
Thank you for your feedback.
Sorry, we failed to record your vote. Please try again
Report abuse

Giovanni Martin
5.0 out of 5 stars Unforgettable classic
Reviewed in Italy on December 7, 2016
Verified Purchase
Unforgettable sci-fi classic by Ridley Scott, best and first episode of many to follow and probably a new vision that influenced many later productions.
Read more
Helpful
Sending feedback...
Thank you for your feedback.
Sorry, we failed to record your vote. Please try again
Report abuse

R. A. Hunt
5.0 out of 5 stars Great movie!
Reviewed in Canada on November 4, 2015
Verified Purchase
Really happy to have this movie with my other ones. Very happy for the movie.
Read more
Helpful
Sending feedback...
Thank you for your feedback.
Sorry, we failed to record your vote. Please try again
Report abuse
Load more international reviews