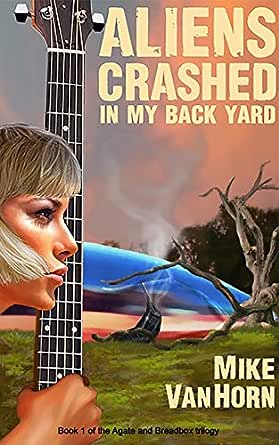 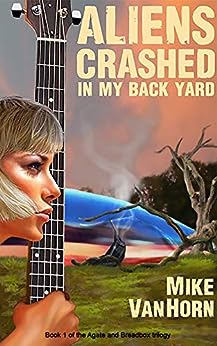 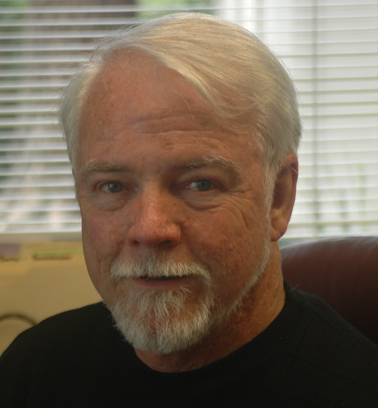 Eric Klein
5.0 out of 5 stars What would you do if aliens landed in your backyard
Reviewed in the United States on June 19, 2019
Verified Purchase
Traditionally stories of first contact tend to have two kinds of protagonists: clueless hicks or the military. This is not the case in Aliens Crashed in My Back Yard.
Here you have a compassionate disillusioned performer who has a UFO crash in her backyard during a friendly get together. If you can accept that premise, then what follows is easily believable as she meets and learns about this ship and its crew.
The book is full of lyrics for songs that should be recorded, and a cast of characters that all have realistic motivations and believable actions.
Looking forward to book 2.
Read more
2 people found this helpful
Helpful
Comment Report abuse

Andy Zach
4.0 out of 5 stars Poignant, funny first contact science fiction
Reviewed in the United States on April 29, 2020
Verified Purchase
Just finished the book. What a delight! Mr. Van Horn does a great job characterizing the main character, Selena M, a pop singer on the downside of her career, who meets the alien who crashes in her back yard.

Selena is assertive but doesn't always know what she wants. She's a successful singer, but she's dissatisfied. Her whole life changes when she meets the alien she names 'Breadbox'.

The alien is near death and Selena helps nurse her back to health. There is a universal translation device that eventually allows them to speak and they learn they have more in common than can be imagined. They're both singers.

They grow closer together as Breadbox reactivates Selena's interest in singing and composer. In turn, Selena gives Breadbox a reason for living, even after the failure of crashing on the Earth.

Complications occur and the novel really takes off. I can hardly wait for the second one!
Read more
Helpful
Comment Report abuse

C. Giles
5.0 out of 5 stars Love all the extras that come with this!
Reviewed in the United States on February 13, 2020
Verified Purchase
I really enjoyed reading this book. A few of my favorite things about it: the exploration of the beauty, function, and import of music and story and how they can be used to communicate and connect across species, worlds and galaxies. I also liked Selena's inner struggle, learning how to find and balance her deepest desires and conquer her fears. Humor and compassion abound throughout the book, and extras include song lyrics and illustrations.
Read more
Helpful
Comment Report abuse

P K Macy
5.0 out of 5 stars Imagine it really happened!
Reviewed in the United States on June 6, 2019
Verified Purchase
If you like the thought of a peaceful alien encounter this story will fill your mind with possibilities and make you question how you would react. The main character's actions are believable. The alien is as strange and imaginative as any I have seen in my dreams. And you get lyrics from the song writer / performer (many of the songs are actually performed on the author's website.)
Enjoyed it!

StoryGuy
5.0 out of 5 stars I wish I could give more than 5 stars
Reviewed in the United Kingdom on February 7, 2019
Verified Purchase
It is so nice to read a Scifi book that is not all violence, just nice comfy hug of a read. It explores some very human concepts in a new way and I am glad I got this book. I cannot wait for book 2, I really recommend this book!
Read more
Report abuse

Martin B
5.0 out of 5 stars A real page-turner
Reviewed in the United Kingdom on February 22, 2019
Verified Purchase
I bought this book at the author's recommendation and was very pleasantly surprised at what a good read it is. Two female singers, one human and one alien, make happy music together until the government steps in. Ownership of the damaged spaceship is resolved - by the spaceship! - and results in a neat conclusion.
I hope the sequel will not be too long coming. Thoroughly recommended.
Read more
Report abuse
See all reviews