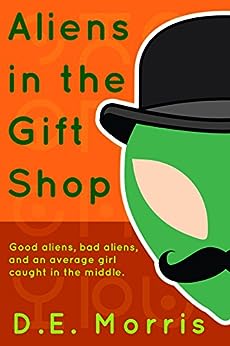 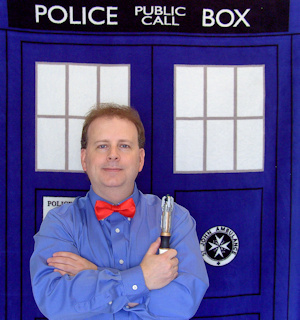 D.E. Morris has been a sci-fi/fantasy geek since he first flew down the Death Star trench with Luke and trudged the weary road to Mordor with Frodo. D.E. did not grow up with a television and has been a voracious reader from a young age, as books became his entertainment. He had read "The Lord of the Rings" by the fifth grade and continued on with authors such as Lloyd Alexander, John Christopher, and Terry Brooks. During high school, he was one of the few students who didn’t groan when a creative writing project was assigned or one of the "classics" given to the class to read. Current influences include Douglas Adams and Steven Moffat (as well as being an obsessive Doctor Who fan). He currently lives in the Seattle area with his wife and two parakeets. --This text refers to the paperback edition.

dryad58
4.0 out of 5 stars Fun, Entertaining, Engaging
Reviewed in the United States on June 7, 2015
Verified Purchase
The book is about two bumbling aliens on a cautious research expedition on earth, and the mishaps and adventures that follow. D.E. Morris is a strong comedy writer. The first scene was absolutely hilarious. This is an unusually structured book in that it starts out as a comedy (I laughed out loud), forays into action-comedy, then action, then sci-fi adventure. So, it was unpredictable. That was a minor negative because it was slightly confusing that the story veered toward other genres (I thought it could have potentially ended 3/4 of the way through), but a positive because it had more substance, drama and a wider scope back story.

Grammar: Since I ‘read’ the book mostly by the text-to-speech feature, I only saw one error in the text, which is important in my wanting to continue with a book. The book read well. Punctuation, sentence structure, descriptions and dialogue were steady, realistic and well edited.

The ending was somewhat of a surprise. I thought there would be some change or resolution with the gift shop at the end. Qualm: it always feels unrealistic, and foolhardy, to me when characters stand arguing in life-threatening situations. Otherwise, this was a good and entertaining read and an engaging story.
Read more
One person found this helpful
Helpful
Report abuse

Kerry L. Reis
5.0 out of 5 stars A Fun Gem for Lovers of Doctor Who-Style Stories
Reviewed in the United States on August 2, 2014
Verified Purchase
It's just another quiet Tuesday in Marcy's little gift shop when two short and strangely dressed men walk in, trying to act casual in their investigation. When they come down with sneezing and breathing attacks around the potpourri section, they rush out, dropping a small cylindrical object which Marcy picks up and places in her coat pocket to protect it until they come back to retrieve it. What she doesn't know at the time is that these two "men" are actually bumbling alien scientists who have come to investigate the creatures on planet "OR-35" which the inhabitants have called Earth and they have just dropped the key to their spaceship. What the alien scientists don't know is that their own planet had come under attack from another planet in their system as they were taking off and a invaluable party that the invaders are after has stowed away on their ship, causing the invaders to send a malevolent bounty hunter creature after them. Marcy is just about to face the adventure of her life. This quick read will be a delight to every Whovian fanatic who embraces the comedy and adventure of a sensible earthling connecting with the intelligent yet off-beat wacky aliens to save the universe from deadly invaders. Serious Sci-Fi? No. Enjoyable wacky little adventure. Yes!
Read more
One person found this helpful
Helpful
Report abuse

Linda
4.0 out of 5 stars Aliens from Another Planet Stuck on Earth..Fun Read
Reviewed in the United States on May 23, 2017
Verified Purchase
A fun read with odd characters. I mean why would two aliens go to a gift shop upon arriving on earth? Because they thought it looked safe. But...this is where their adventure begins. Marcy is the earth female who meets them. They become stuck on earth because they lost the key to their ship. There is lots of banter between Zort and Quigmart, the two aliens. Then they find a stowaway, the assistant to the premier from their planet. It is a fun read with several sci-fi actions that make you wish it could be real. The cover alone is worth the buy. 99 cents is a real deal.
Read more
One person found this helpful
Helpful
Report abuse

Gibbs
5.0 out of 5 stars Interstellar adventure that reaches a broad audience.
Reviewed in the United States on January 19, 2015
Verified Purchase
Zort and Quigbat are two alien explorers clearly over their heads as their mission to explore OR-35 ( Earth ) trips over itself as quickly as it starts when they loose the keys to their spaceship at Marcy's Gift Shop. All while oblivious to the fact that their own world is being invaded. Stowaways, bounty hunters and fish-out-of water adventure fill the pages of this entertaining tale as Marcy gets caught up in an interstellar crisis. If any lessons can be taken from this story, it's that you should always have a spare set of keys.

The verbal jousting of the two main protagonists to be perfectly honest, is golden and carries the weight of this short story which is a relatively short read. The short length is a strong point too, as it doesn't get bogged down under the pressure to add useless filler. That means right from page one, it hits the ground running. As someone who has read piles of sci-fi novels, all I can say is thank friggin' goodness as many books in this genre start so painfully slow, so kudos to D.E. Morris for good judgement.

There will no doubt be references to the works of Douglas Adams when mentioning this book. However, I feel it possesses its own style of humor better grounded in semi-real world physics ( ie. no Improbability Drives ) more akin to a Doctor Who universe. If I might allow myself to hope for the impossible, this has the potential to be a brilliant audio-book. The proper British talent of John Cleese narrating of course.
Read more
One person found this helpful
Helpful
Report abuse

DragonOne
4.0 out of 5 stars Enjoyable
Reviewed in the United States on May 31, 2015
Verified Purchase
Unlike aliens from most movies I've seen Quigbat and Zort are not terrifying with designs to take over the planet. In fact, they are quite harmless and perhaps not even very bright. I enjoyed spending time with them. The Vorx that chases them, however, is all that you would expect from a nasty and violent extraterrestrial and you definitely do not want to meet this character in a dark alley! Marcy is human and delightful and probably rues the day that the two amiable aliens walked into her gift shop!
Read more
One person found this helpful
Helpful
Report abuse

Ryan Guy
5.0 out of 5 stars Banter
Reviewed in the United States on April 15, 2015
Verified Purchase
I enjoyed this book and can sum it up in one word-- banter-- which is somewhat ironic considering bantering involves superfluous amounts of words. The aliens banter with each other as they bumble through the mission they were assigned to do on Earth. The feisty human our aliens unwillingly get mixed up with banters with the aliens. The author's prose banters throughout the entire narrative. Some of the humor in the book revolves around fish-out-of-water situational comedy, but the real humor from the book come from how the author tells the story. If you like banter coupled with a fun sci-fi story, Aliens in the Gift Shop is for you.
Read more
Helpful
Report abuse
See all reviews
Back to top
Get to Know Us
Make Money with Us
Amazon Payment Products
Let Us Help You
EnglishChoose a language for shopping. United StatesChoose a country/region for shopping.
© 1996-2021, Amazon.com, Inc. or its affiliates