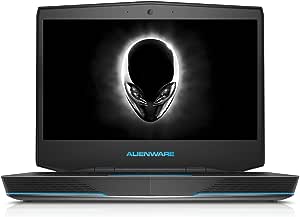 Visit the Alienware Store
3.9 out of 5 stars 10 ratings
| 13 answered questions

Go where the action is with this mobile 14" laptop with Intel Core processors, powerful discrete graphics and long battery life.

All Service and Warranty provided by Dell

3.9 out of 5 stars
3.9 out of 5
10 global ratings
How are ratings calculated?
To calculate the overall star rating and percentage breakdown by star, we don’t use a simple average. Instead, our system considers things like how recent a review is and if the reviewer bought the item on Amazon. It also analyzes reviews to verify trustworthiness.

Maximus
5.0 out of 5 stars Good Portable Gaming Laptop
Reviewed in the United States on October 30, 2013
Verified Purchase
Alienware has made a very good, portable gaming laptop. It being a 14 inch screen is what makes it more portable than my 17 inch behemoth. It is still a little heavy but considering the hardware inside, I'd say it is a fair trade off.

The screen is gorgeous and has good viewing angles and has no glare. The graphics card is able to run most games I have installed on High or Ultra settings, some examples are Far Cry 3, Skyrim, Metro, etc. They run very smoothly and the framerate does not drop. The processor handles everything you throw at it and there is plenty of RAM. Only mediocre piece is the hard drive which I go into detail below.

I do use a cooling pad because the laptop can get warm when playing graphic intensive games but that is to be expected. When not playing games, the laptop stays nice and cool.

The build of this laptop is very sturdy. I like how solid the case feels and will not worry about damaging the laptop when taking this on trips. Even though I am very careful with my hardware, with something this expensive it is always a worry and some of that is mitigated with the solid construction of this laptop. There is no glossy finish so smudges aren't constantly showing up. The keyboard feels very nice for typing and playing games.

This is my first alienware so the lighting is a pretty interesting feature, ultimately provides no value but fun to play around with and customize. Some may find it a negative but after using it, I personally enjoy it. Some games even have scripted events where the colors will change depending on what is happening in the game. For example, in the new X-Com, when it is the aliens turn to move, the lighting will all change red indicating danger or a threat which I found to be a nice touch to the ambience of the game.

The one negative to this laptop is the standard hard drive instead of a SSD. I bought a SSD and installed it, which was relatively easy, there are videos on Youtube from Alienware that have step by step instructions on how to. For the price though, this laptop is pretty great and I would recommend the purchase. I will update if any long-term troubles arise.
Read more
6 people found this helpful
Helpful
Report abuse

Here are some of the things I would have liked to have known:

Those were the numbers right after going through the initial setup. The numbers are pretty good I think.

The C: drive was in one big partition, which I actually like having a separate partition to store my data, but that is just me. This was easily fixed with the Volume Shrink feature in Disk Management.

Also, one of the main reasons I got this laptop was because I could still get Windows 7 on it. I just don't like Windows 8, or 8.1. I figured I had better get it with Windows 7 while I still could. I think Windows 7 will have the staying power that XP has, while Windows 8.x is the new "Vista", which basically sucked, but what do I know! That's just my opinion.

I do like the slot loading disc drive, but I suppose I'm just a bit more used to the way the PS3 pulls the disc in. Once you insert about 90% of the disc, then it will engage to suck in the disc the rest of the way. That is really nit picky, but just something to note if you are used to the way PS3 loads discs. I'm comparing this to the original "fat" PS3. I don't know how the newer PS3 slims load discs. This really shouldn't be deal breaker, just something I would mention.

The display is very nice, just as others have mentioned.

The top cover is silver, but the inside is black, just in case you were a little confused by the pictures and the item description. Speaking of the inside, where you rest your palms, it is sort of a rubbery surface, which is kind of interesting.

The Alien FX is pretty cool, as others have said. When you touch the touchpad, it lights up. The keyboard is nice and simple, and there are shortcut keys for ejecting discs, muting, increase/decrease teh volume, AW PERF (I haven't messed with that), enabling/disabling the touch pad, which is nice when you are typing and you keep touching the touch pad, and enable/disable the Alien FX.

BTW, I couldn't figure out how to turn this thing on! I had to look really carefully. I don't want to give that away, because I think it is part of the user experience of getting something new.

The sound is pretty good on it, just from what little experiences I've had with it so far.

The power supply is about the size of a brick, only half as thick.

Coming from owning a netbook, this thing does feel heavy, but it does feel like a quality piece of machinery!

I have never owned an Alienware product, but this does feel like a good quality item.

My plan is to run VM's on this thing, while still having a decent graphics card to run a game if I so choose.

If I find anything else of interest, I'll update my review.
Read more
One person found this helpful
Helpful
Report abuse

Mohsen A.
4.0 out of 5 stars A very good machine
Reviewed in the United States on June 18, 2014
Verified Purchase
This is a great gaming laptop, and the configuration offered by the seller was well chosen, skimming only on the RAM (8GB instead of 16GB) which is easily upgraded if required.
2 problems I would like to confirm ( I already knew them ) 1: weight, this is a heavy machine, not to move around with it for email and web browsing, buy a tablet and save your back. 2: fan noise, and this is why you need a good headset/headphone if you are an extreme gamer.
Battery life adds to the weight, if you are a mobile extreme gamer, you need to carry the power brick to play for more than 2 hours comfortably :-)

Overall, I like this laptop/portable, recommend it and would buy it again .

Finally I would like to reiterate my thanks to the seller as they did a great job with logistics.
Read more
One person found this helpful
Helpful
Report abuse

Joe
5.0 out of 5 stars Very satisfied
Reviewed in the United States on November 17, 2013
Verified Purchase
First review I've ever wrote so here it goes. I bought this laptop based on the fact that I'm leaving for school so I needed something mobile and it's definitely delievered so far. I am able to run skyrim on this with ultra high graphics easily. Nice look to it, not to heavy. Battery is satisfactory but you can't really expect to much while gaming. I've also heard a lot of complaints about the noise level. While it does get loud at time while plugged in to the power source. It's really not that bad. No laptop is perfect unless your willing to spend lots of money. For the price this laptop is definetly worth it. I'd recommend this to anyone who needs a laptop for gaming and school.
Read more
5 people found this helpful
Helpful
Report abuse

Pritidenta
5.0 out of 5 stars very good
Reviewed in the United States on March 7, 2014
Verified Purchase
It's all fine. The system works very good and we are impressed about the good performance of the systems.
Thank you
Read more
2 people found this helpful
Helpful
Report abuse

cristian
5.0 out of 5 stars amazing
Reviewed in the United States on November 5, 2013
Verified Purchase
Great!!!!! The best laptop of my life, i recomwnd it!!!! Dota 2, lol, counter, ufffff it is amazing, the best
Read more
One person found this helpful
Helpful
Report abuse