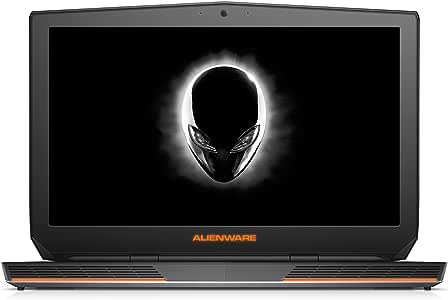 Buy this product as Renewed and save $799.60 from the regular price.

The Alienware 17 is thinner and lighter than any 17 inch laptop we’ve created before, but that doesn't mean we skimped on performance. It’s crafted with aerospace-inspired carbon fiber filled surfaces that add stiffness and durability, and copper heat sinks that enable proper cooling. Powered by high-performance latest generation Intel processors, and offering a new USB Type-C port with support for SuperSpeed USB 10 Gbps (USB 3.1) and Thunderbolt 3 technologies, the Alienware 17 is designed to give you the best experience on an impressive screen.

Blow your hair back: Use your USB Type- C port as a Thunderbolt 3 port, and experience 40Gbps (4x the USB 3.1 protocol).

Solid-State Drive (SSD): Solid-state drives are similar to the flash-based memory that you find in USB memory devices and have no moving parts, making them more secure and less prone to failure than standard hard drives. SSDs also pull your data from the drive faster and outperform 10,000 rpm Hard Disk Drives (HDDs) in read/write speeds, meaning you’ll also get faster load times on game maps and other information that’s stored on your device.

For people on the go, the potential benefits are significant.

3.7 out of 5 stars
3.7 out of 5
77 customer ratings
How does Amazon calculate star ratings?
Amazon calculates a product’s star ratings based on a machine learned model instead of a raw data average. The model takes into account factors including the age of a rating, whether the ratings are from verified purchasers, and factors that establish reviewer trustworthiness.

Rachel Michaels
5.0 out of 5 stars Looks Great, Feels Great, Performs Great, at a Great Price!
Reviewed in the United States on September 26, 2017
Verified Purchase
The cord likes to fall out at times, it collects fingerprints big time, it is heavy and bulky. Those are my only complaints with this pc. That being the case, it gets 5 stars from me. It runs all of my games as expected. (I had realistic expectations though). I have better battery life than promised, actually. Aesthetically and performance superior. Fantastic PC. I would have paid about $3,000 to get this much on a new pc had I looked elsewhere. It does not get too hot, makes almost no noise (unless I push it hard, to the breaking point of most pc fan capabilities, which I only do for testing purposes). Theatre is awesome too. Good sound, great light show. Feels great, looks great, performs great. The price was great too. I paid $1300 for mine. It may need a few upgrades if you live on the pc but it can handle it otherwise.
Read more
Helpful
Comment Report abuse

D. Dietzen
5.0 out of 5 stars AMAZING LAPTOP, NOW THAT I HAVE THE BUGS WORKED OUT.
Reviewed in the United States on March 27, 2016
Verified Purchase
Received my Alienware 17 R3 a few days ago.
Build quality is great, it feels very sturdy.
Keyboard and touch-pad are some of the best I've ever used on a laptop.
Screen is gorgeous, and the video card is running all my game at high or ultra settings, just like I had hoped.
It doesn't run overly hot, even while gaming.
Battery is decent for a rig this powerful, of this size. I get about 4 hours out of it before I have to plug it in, while gaming (almost all I do).
I suspect it would last longer if I wasn't gaming so much.
In short, this laptop is everything you expect a high quality, top of the line (or close to it), rig to be.
EXCEPT...
I had LOADS of IRQ, BIOS and Driver issues out of the box.
Crashes, blue screens, conflicts...
I spent a day updating and troubleshooting various problems, updating practically ALL my drivers, the BIOS...
I wont go into all of it here, because there was a lot, and these sort of issues will be different with each computer, so a lengthy explanation wouldn't be useful, with one exception.
I had the exact same problem as tons of other people with the Killer Wireless dropping signal constantly.
Seriously, do a search, it's a VERY common problem with this laptop.
After spending some time researching the issue (which will generate a lot of possible solutions), and trying several "fixes" to no avail. I downloaded the newest Killer Network Manager from their website, then uninstalled both the existing suite AND the existing killer wireless drivers. Then I installed the newest version of the Killer Network Manager (which includes drivers). This fixed the issue. I have gone several days now with no Wireless issues. NOTE: be sure to DL the newest version BEFORE you uninstall everything or you won't be able to get online to DL it!

Long story short, after spending a couple days updating, uninstalling and reinstalling, and a 2 hours on the phone with Alienware to fix a few issues that updating drivers wouldn't fix, I now have an amazing laptop that runs perfect, and is everything I had hoped it would be.
Having to do all that work was a pain in the ass for sure, but it shouldn't be a deal breaker. None of the problems were defective hardware, etc.

As someone who is fairly tech-savvy, and someone who spent months researching before pulling the trigger on this purchase, I still feel that this laptop represents the best value at this price-point.

Carlos Medina
3.0 out of 5 stars I Don't Know
Reviewed in the United States on April 20, 2016
Verified Purchase
I feel conflicted about the 3-star rating. I think that the product can be reviewed as a 4.5-Star or 5-Star performer if it wasn't for the issues that I suffered.

Summary: I received a first product that came with a "blue screen of death" issue. It started up and it went to the blue screen error crash, after rebooting itself for 6-7 cycles, I shut it down and contacted Alienware. After I spoke to Alienware support.... They have CONFIRMED a software issue. NVIDIA sent Dell/Alienware a memo/notice about the new video drivers for the card.

They said that the old drivers should work fine. since the computer wouldn't land on the desktop for me to address this, I decided to not endure the issue of a new $1600 computer that should work out of the box. Amazon promptly replaced the item and took the return without a hassle. Always great.

The second computer worked fine, I didn't install drivers or anything. It booted up without any hassles or difficulties. The performance and graphics are fantastic. I played World of Tanks and Final Fantasy 14 without issues. FF14 runs at 70+ FPS at the highest settings. Boots up very fast and it runs programs very quickly. The sound is great for a laptop, It even has a port underneath for some deep sounds.. It's not a boom box, but it's pretty rich for what it is.

After 24 days, it was dead. The light on the power adapter was on, but as soon as it got plugged into the laptop, the light went out and the laptop wont power up or recharge. Who knows what's wrong with it.

I contacted Amazon about the issue, they were helpful immediately and issued a return order and refund.

Here's where I stand. A laptop computer priced at this level should work without any issues, software or hardware. I am very understanding and it is a likely case of getting a couple of damaged/defective units. It is interesting to know that Dell would probably spot the issue and repair it. BUT, Would you REALLY want a mended computer that you JUST purchased for $1600?

In my opinion, the performance of the device should be a reflection of the price paid for the product. We should not have to tweak the hell out of the computer to get it to work.
Read more
5 people found this helpful
Helpful
Comment Report abuse

Is there something I need to know may be?? Or what can I do to fix this problem I have????
Read more
2 people found this helpful
Helpful
Comment Report abuse

Gabby
5.0 out of 5 stars Smart, responsive and VERY fast eye candy!
Reviewed in the United Kingdom on January 20, 2016
Verified Purchase
Superb service, very quick delivery and the laptop is gorgeous! It is chunkier than others in the same class but that actually makes it feel much sturdier than the thinner and heavier Gigabyte model I tried as well.
Read more
3 people found this helpful
Helpful
Sending feedback...
Thank you for your feedback.
Sorry, we failed to record your vote. Please try again
Report abuse