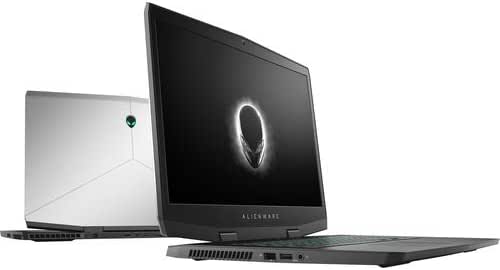 Visit the Alienware Store
4.3 out of 5 stars 97 ratings
| 65 answered questions

4.3 out of 5 stars
4.3 out of 5
97 global ratings
How are ratings calculated?
To calculate the overall star rating and percentage breakdown by star, we don’t use a simple average. Instead, our system considers things like how recent a review is and if the reviewer bought the item on Amazon. It also analyzes reviews to verify trustworthiness.

Aydan
3.0 out of 5 stars A mix of good and bad
Reviewed in the United States on April 3, 2019
Style: 15.6 Inch | i7-8750H | NVIDIA RTX 2060Verified Purchase
As I write this, I am still debating keeping the laptop or not. I'll boil down my pros and cons so people know what they are getting into when considering the Alienware m15 2019 edition.

Pros:
- Purchased on a daily deal sale! 20% off. For the specs this was a very good price
- Dual Channel Ram. Quite a few laptop makers are using single-stick RAM even though in-game testing by multiple outlets has shown that dual channel RAM can be a real performance boost
- Alienware suite. Alienware bundles their computers with a very simple-to-use, but helpful GUI for tracking hardware components and setting profiles for games. Plus the bloatware included was pretty non-existent compared to many other vendors.
- Chassis build. It's a solid hunk of mostly-aluminum that offers very little flex (this is a good thing) and plenty of stability. Plus...to me it just looks nice.
- Easy to upgrade. Unlike several laptops with a flipped motherboard (making upgrades extremely challenging), the Alienware m15 puts its components within easy reach. Undo 8 little screws, gently pry off the back panel, and you'll have access to the RAM, M.2 slots and battery.
- The keyboard. Key travel is decent and the keyboard is sufficient size for all but the meatiest fingers. Backlighting is GREAT. There are six RGB zones if you're into that sort of thing too.
- It's 'Merican. Hey, Alienware is an American company (owned by Dell now). Support the home team! Even if these are built in China anyways :(

Cons
- HEATING. Big con here, folks. While the i7-8750H included is rated to a max temperature of 100 degrees, this pushes far too close to that threshold too often. Moreover, after a session of intense gaming, the Alienware logo button (on/off) can become exceedingly hot. As I captured in Shadow of the Tomb Raider, this laptop gets great FPS on a very demanding game but at quite the heat cost. This might degrade the laptop over time.
- Screen backlight bleeding. Unfortunately this is a common issue with many laptop makers. The backlight bleeding is "just acceptable" enough to me that I hesitate to return the laptop as the screen itself has no noticeable dead pixels yet.
- Fingerprint magnet. Holy crap...whatever rubberized finish they placed for the wrist-rest, and the vents directly above the CPU/GPU, it must be a forensic scientist's dream.

Overall, the Alienware m15 performs as expected for its terrific specs. SoTTR on "Highest" settings easily tops 60+ FPS in every scene and 90+ in most. In other, less demanding games like Fortnite or Apex Legends, a user will see the true benefit of the 144hz display. A few problems keep it from being a sure-fire win and this is a very crowded thin-and-light category. If not for the terrific sale price, I would not recommend this over any of the numerous similar machines such as the Lenovo Legion Y740, the Acer Triton 500 or the HP Omen 15t.

Amazon Customer
5.0 out of 5 stars Alienware M15 RTX 2060
Reviewed in the United States on April 6, 2019
Style: 15.6 Inch | i7-8750H | NVIDIA RTX 2060Verified Purchase
This laptop is great for gaming and doing other type of work. The battery life is great. Gotta tweak a few things here and there to get it up to speed. UPDATE THE DRIVERS ANF BIOS.
Read more

Admin_Dude42
2.0 out of 5 stars Potential fire hazard, AC power brick underpowered
Reviewed in the United States on July 5, 2019
Style: 15.6 Inch | i7-8750H | NVIDIA RTX 2060Verified Purchase
I bought this on recommendation from some friends, because of the configuration with an i7 and latest RTX graphics for gaming. Loaded up with steam, I started Insurgency. Then, the fans started really kicking up. The top of keyboard was about 130 degrees F, according to my infrared thermometer. I tried elevating it with a CD jewel case and pointing a small fan at it, but the internal temperature was always around 200. Lowering the settings on my game helped very little, and the 2 internal fans ran at full speed. Throttling windows CPU usage to 80 percent and making sure overclocking and hyperthreading were disabled did not help either. The heat output from the fans felt like a hot air paint stripper. It appears that Dell XPS and HP Omen laptops with the RTX GPU suffer the same heating issue. There is just not enough space internally for sufficient airflow in an ultrabook-sized laptop.

Another issue I experienced was that after playing a game for 30 minutes on AC power, the battery discharged to 90 percent. According to some forums, some have swapped out the 180w power brick on their m15s for a 240w or 330w which allegedly helps this issue.

I just couldn't live with it, so I'm returning for a full refund. I'm going to steer clear from gaming laptops for now, and use the money to upgrade my custom desktop.

Dell: you need to make this a little thicker to accommodate taller heatsinks for better heat dissipation. There also needs to be a better direction of airflow; top and bottom rear of the laptop is where the heat seems to hang out and get sucked back into the fans. Air should be coming from the front of the unit, away from the fan outlet. Also, the AC adapter needs to be more powerful or stop using Lite-On for the power brick vendor. Older Alienwares have OEM power bricks by Delta, which don't cause the power drain issue.
Read more
16 people found this helpful
Helpful
Comment Report abuse
See all reviews