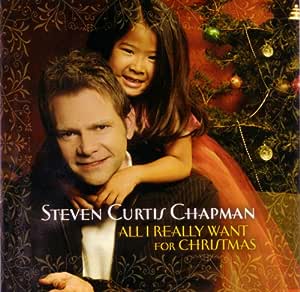 All I Really Want for Christmas

Steven Curtis Chapman All I Really Want For Christmas We receive various CDs from the radio cores that we remanufacture. As a result, we are are now selling them! Our CDs are professionally resurfaced and are guaranteed to work or your money back! These listings are for the disc only and do not come with the case, album art, or inserts. If you have any questions about the CDs, please do not hesitate to get in touch.

You dont expect a Christmas record to become a campaign for adoption but in Steven Curtis Chapmans able hands, he manages to weave the joy of answered prayers for family and kids with songs from the season of the child born in a Bethlehem stable two centuries ago. With three adopted Asian kids--and a foundation to help others fund their own adoptions--Chapman finds plenty to celebrate and give thanks for and he does so in "All I Really Want" (told from a child's desire to belong to a loving family). It's the perfect subject for a song at Christmas, flanked by many familiar standards, a cameo from Vince Gill and 14 tracks all (including gospel readings and greetings from Chapman and one of his new daughters). The Christian music star has put the Word into action in his own life and it's that spirit that colors this special Christmas package. Give it to someone who's waiting to adopt one of the millions of children looking for a home this season. Speaking from experience, it will make the trial of waiting a lot easier. --Martin Keller

4.5 out of 5 stars
4.5 out of 5
28 customer ratings
How does Amazon calculate star ratings?
Amazon calculates a product’s star ratings based on a machine learned model instead of a raw data average. The model takes into account factors including the age of a rating, whether the ratings are from verified purchasers, and factors that establish reviewer trustworthiness.
Top reviews

Libby_Lynn
5.0 out of 5 stars Wonderful Christmas CD!
Reviewed in the United States on January 5, 2008
Verified Purchase
SCC does an incredible mix of great Christmas songs on his new CD--some of which are familiar, with new songs as well. His new hit about a child wanting a family for Christmas is very touching. What is especially neat is that there are a couple parts on the CD that are done by his young adopted daughters--the first being the Christmas story read by one of them, and lastly, singing "We wish you a Merry Christmas" as the final cut (especially sweet!)

This is a treat that should be tucked into everyone's stocking. Steven Curtis Chapman is such a gifted singer and songwriter who truly helps us understand the real meaning of Christmas.

"And that's what Christmas is all about, Charlie Brown"
(Linus)

Running Deer
2.0 out of 5 stars Not much Christmas here
Reviewed in the United States on December 16, 2011
Verified Purchase
I get the feeling all through this album that Chapman's purpose was to create a Christmas album that doesn't sound like a Christmas album. No choirs, no bells, no sleigh bells, no Christmas cheer. What it sounds like is simply a cover album, one that has very pleasant and well-done songs, but that doesn't make me feel Christmas in the least. This could be any album from any time of the year--it's just Chapman's renditions of many songs that we know, done in his standard musical style that hasn't changed much or grown over the last twenty years. If you want something with a Christmas feel that's going to help you with your Christmas spirit, pass on this one. If you'd like some nice songs that sound a bit generic, then by all means, give it a listen. The two stars are because it pretends to be a Christmas album, but isn't, really. If it were supposed to be a normal, everyday album, I'd give it four.
Read more
One person found this helpful
Helpful
Comment Report abuse

jonnstoffer
4.0 out of 5 stars Four Stars
Reviewed in the United States on December 29, 2016
Verified Purchase
it was nice to hear for the holidays from a father and daughter! shipped quick and played well!
Read more
Helpful
Comment Report abuse

Yol
5.0 out of 5 stars I love it!
Reviewed in the United States on May 9, 2013
Verified Purchase
Steve Curtis Chapman is an amazing artist! This is a wonderful Christmas CD. I use "Go Tell It On The Mountain" in one of my catechism classes! The first and last tracks with his little girl are awesome! Thanks!
Read more
Helpful
Comment Report abuse

Suzanne Miller
5.0 out of 5 stars Touching and beautiful - Classic Steven Curtis Chapman
Reviewed in the United States on May 20, 2013
Verified Purchase
What can I say. Steven Curtis Chapman at his best, with fun Christmas songs and hymns. The moments with the kids are cute, but I prefer the songs.
Read more
One person found this helpful
Helpful
Comment Report abuse

AJ
5.0 out of 5 stars cool
Reviewed in the United States on April 10, 2013
Verified Purchase
I got this for a freind for Christmas. I didn't get to listen to the music myself but, It came in time for me to be able to give it to them at the beginning of December.
Read more
Helpful
Comment Report abuse

dianetavegia
5.0 out of 5 stars Superb. A must own for fans
Reviewed in the United States on August 16, 2016
Verified Purchase
great album
Read more
Helpful
Comment Report abuse
See all reviews from the United States

Amazon Customer
4.0 out of 5 stars Was enjoyed.
Reviewed in Canada on January 3, 2018
Verified Purchase
Bought it as a gift. Was enjoyed.
Read more
Helpful
Sending feedback...
Thank you for your feedback.
Sorry, we failed to record your vote. Please try again
Report abuse

Page 1 of 1 Start overPage 1 of 1
This shopping feature will continue to load items when the Enter key is pressed. In order to navigate out of this carousel please use your heading shortcut key to navigate to the next or previous heading.
Back
Next
Pages with related products. See and discover other items: all i want for christmas