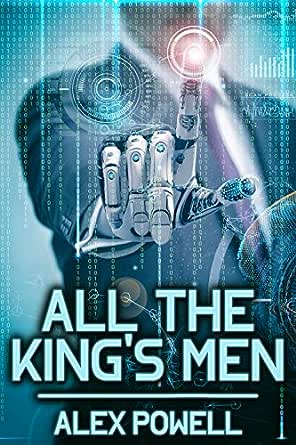 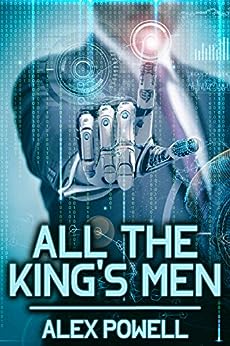 All the King's Men Kindle Edition

4.7 out of 5 stars
4.7 out of 5
3 customer ratings
How does Amazon calculate star ratings?
Amazon calculates a product’s star ratings based on a machine learned model instead of a raw data average. The model takes into account factors including the age of a rating, whether the ratings are from verified purchasers, and factors that establish reviewer trustworthiness.
Top Reviews

Jay Zastrow
4.0 out of 5 stars 4 stars -- Great world-building sci-fi mashed up with an MM-romance subplot.
Reviewed in the United States on July 27, 2016
First things first: Alex Powell’s All the King’s Men is a science fiction novel that happens to have a gay romance as a background subplot. If you try to squeeze this into some mold of being an M/M romance first, you will be disappointed. But if you are a fan of well-composed science fiction, and you treat the subplot as a bonus element, I believe you will enjoy the story as much as I did.

At some point in the future, the Cerebrum is a virtual reality network that functions much like the Internet does today, but instead of sitting at a computer screen, users are completely immersed within the virtual reality to the point where they leave their physical bodies behind and experience only the sensory input they receive from within while logged in. While in the Cerebrum, Fox is a mindnet hacker who works with a small group of others under the supervision of a man known as the King. Their objective is to discover secrets and release them to the public. They take precautions to maintain their anonymity and avoid being caught because their activities attract dangerous enemies. When the King is captured by an unknown government, Fox and the others must somehow rescue him in order to avoid all their lives being destroyed. But sometimes help comes from the least expected source. And sometimes attraction also comes from the same unlikely place.

Let’s start with the science fiction aspect of the novel first since the romantic part is really only a small portion of the overall plot. First and foremost, the author builds a fascinating world for this story. The idea of a fully immersive virtual reality has always been of interest to me, so because the author does so well crafting one, it didn’t take long for me to be pulled into this world. There are a lot of parallels between the Cerebrum and our experience of the Internet, so much of the terminology is the same. As a result, if excessive techno-babble in sci-fi bothers you, it shouldn’t be a problem here. Almost the entire story takes place within the Cerebrum. Not unlike they do on the Internet, users of the Cerebrum can essentially develop whatever persona they wish including their appearance and the private areas they inhabit. The users also have abilities, though it is never made completely clear how these are determined—one of the many reasons I would have loved to see another hundred pages or so of novel length in order to allow the author to flesh out the world more fully—but like everything else in a virtual reality, it depends on the users’ minds.

This fact also makes it unsurprising that the primary story line involves the ability for users of the Cerebrum to access and relive their real-life memories, a component that becomes important as the story develops. Before being captured, the King makes use of a skill no one knew was possible in order to prevent his memories from falling into the hands of his captors. This essentially establishes a treasure hunt of sorts as one of the main tasks for Fox and the others. They must complete this while avoiding their own capture by agents of the unknown government, agents who are referred to only by a number instead of a name.

The perspective of the story alternates between Fox and one of these agents, a man called Seven. These agents are essentially “programmed” to be unfeeling in following the orders of their masters and to be indistinguishable from one another, but right from the start, his interactions with Fox begin to open his eyes to the possibility that he’s not just a program, he’s a human who unlike the “real” people in the Cerebrum, is totally unaware of his existence in the real world. While both characters are interesting in my opinion, Seven’s progression is one of my favorite parts of the book. There is never a problem with the perspective throughout the novel: the fact that Fox knows all about his real life while Seven doesn’t have a clue about his is more than enough to keep their internal monologues distinct.

As far as the romantic aspect, it is basically nonexistent until the second half of the book. When things finally start to happen, I understand why the initial interactions take place, and I can understand Seven’s attraction to Fox—Fox is the impetus for Seven’s personal discovery of himself. Because of this, I enjoyed the romance from Seven’s point of view. On the other hand, I never really understand the attraction from the other direction. Granted, the entire romance consists of only ten or fifteen percent of the page time in the novel, and since this isn’t a long novel, that doesn’t make for much chance to develop the romance. As a result, I didn’t see the romantic plot as advancing Fox’s character at all. So just like with the world-building comment earlier, I would have liked to see the book be longer in order for the romantic story to be developed better.

I have read a good deal of science fiction in my day, and one thing that all of the good ones have in common is the fact that they make some sort of social commentary. All the King’s Men does contain some hints of this, but in the end, the message seems a bit muddled to me. Perhaps again a longer novel would have given the author more time to accomplish this. That being said, the world-building and story are good enough already to make the book something I can recommend. The romance, while slim in development, is just a little bonus.
Read more
2 people found this helpful
Helpful
Comment Report abuse

Rina
5.0 out of 5 stars Fantastic book with a great ending
Reviewed in the United States on July 27, 2016
Review written for Love Bytes Reviews.

Let me start off by saying: Wow. Just wow. While I was intrigued by the premise, I was in no way prepared for the reality of this story and it was, in my opinion, completely amazing. To give you an idea of what this book is like, imagine if The Matrix and a show called Ghost in the Shell (if you aren’t familiar with it, look it up because its fantastic, too) had a steamy love affair resulting in a love child that grew up to be completely awesome. This book is that love child. No joke.

The vast majority of the book takes place online in a place known as the Cerebrum, where everyone is hooked in and uses avatars to move around and interact with both other people and all kinds of data. Things start off pretty quickly as a group of revolutionaries who work to expose corruption have their meeting crashed by a group of government agents, resulting in the capture of their leader: King. What follows was a story with a lot going for it and a lot going on in general. The main character, Fox, spearheads the effort to recover King but with the Agents still searching for the remainder of the group and the idea that there could be a traitor amongst them, things are far from easy.

On the other side of the spectrum are the Agents; government controlled and tasked with hunting down those the powers that be want silenced. Amongst these is Seven; up until King was captured he was just another Agent doing what he was told but since then he’s seen and heard things that have caused him to change and even question his own existence. I loved the interactions between him and Fox; both men are so different yet they bring out something in each other they didn’t even know they needed. Their times together are sometimes sweet, sometimes flirtatious but each instance kind of opened up their eyes a little more to what’s going on around them. I didn’t need an over the top, hearts in their eyes romance with these two to just get it.

While the story itself was completely fantastic, the ending was even better; I was surprised by both how things came together and the amount of maneuvering that took place among the characters to get to that point. The reveal itself was the best part for me, however, and I couldn’t have been happier with how things ended. I’ve never read anything by this author before and I’ve certainly never read a book like this before but I really hope I get the chance to do both again in the future. If you like sci-fi, most especially The Matrix, I’d recommend you check this one out; I’m so glad I did!

Amazon Customer
5.0 out of 5 stars Very good book!!
Reviewed in Canada on November 9, 2016
Verified Purchase
I loved this book! It was very interesting!makes me wish u could actually do all this stuff in real life. Who knows probably soon😊
Read more
Helpful
Sending feedback...
Thank you for your feedback.
Sorry, we failed to record your vote. Please try again
Report abuse