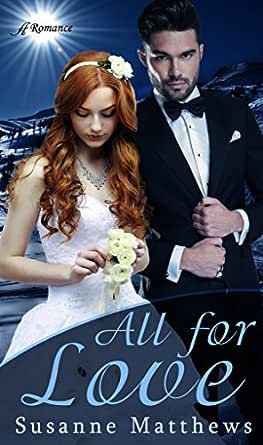 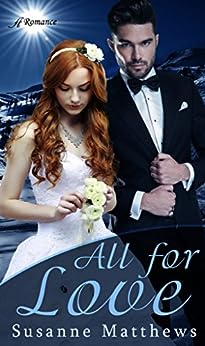 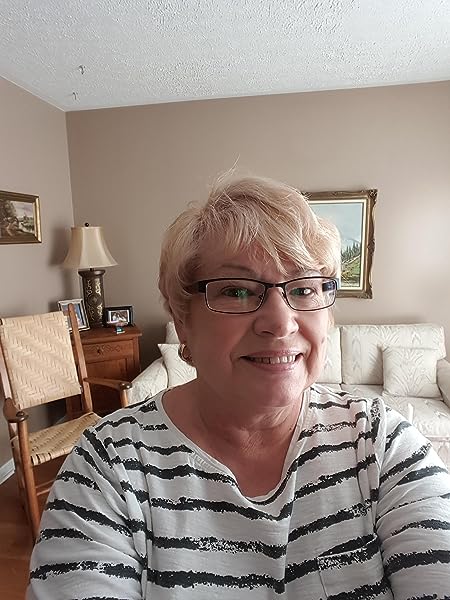 All for Love Kindle Edition

All for Love is a new mystery/romance from author Susanne Matthews. It's fast paced and action packed, with intricate plotting.  The Reading Cafe

4.0 out of 5 stars
4 out of 5
10 customer ratings
How does Amazon calculate star ratings?
Amazon calculates a product’s star ratings based on a machine learned model instead of a raw data average. The model takes into account factors including the age of a rating, whether the ratings are from verified purchasers, and factors that establish reviewer trustworthiness.
Top Reviews

Anonymous Reader
3.0 out of 5 stars An ok story with too many mistakes
Reviewed in the United States on March 22, 2018
Verified Purchase
I enjoyed the first portion so much but then things declined after the first fourth of the story. There was too much passive descriptions and too much backstory. Not enough of a balance of action and suspense. The ending was fun and action packed but the lead up to it lacked enough tension. I did like the main characters but I think the side characters could have used more depth. And there were over 30 editing mistakes that could have been caught wuth a careful read through - which is one of my pet peeves unfortunately. That's a big reason for the 3 stars.
Read more
Helpful
Comment Report abuse

Front Porch Reviews
4.0 out of 5 stars Romantic suspense story
Reviewed in the United States on May 23, 2018
Verified Purchase
This book was about marriage, deception, and disguises all for the purpose of keeping an author and his daughter safe.
The character development could have been better. The characters also had A LOT of money which they used to take care of many problems in quite unrealistic ways.
The antagonist in the story didn’t really make sense. As just by being around him, Greg should have been able to figure out that something was wrong.
Read more
Helpful
Comment Report abuse

Linda Sue Organ
4.0 out of 5 stars Great mystery!
Reviewed in the United States on February 12, 2018
Verified Purchase
I loved the story line! It kept me guessing to the end! An outstanding mystery you won't want to miss
Read more
One person found this helpful
Helpful
Comment Report abuse

Reader Lady
4.0 out of 5 stars Sweet romance
Reviewed in the United States on July 6, 2015
My Musings

I am a huge fan of Susanne Matthews. Once I read Echoes of the Past, I was hooked, and searched for her entire back list and read all of them. All For Love is a bit of a departure from her usual writing style. Normally she writes sensual romantic suspense. This book is still a romantic suspense, but it has overtones of an inspirational story. While this is not my favorite book of hers, I did enjoy it.

Andrew Gregory Robertson is an author of hugely successful spy thrillers. When his daughter is almost killed in a car explosion that does kill her mother, a movie star and his ex-girlfriend, he turns to his cousin to protect Sheena. When Olivia Cummings is assigned as his daughter’s bodyguard, because she was once an Olympian skier and his daughter wants to try out for the team, he is immediately attracted to her. He will not find it hard to become her husband in name only to provide cover for his daughter. His problem will be keeping it in name only.

Olivia hasn’t skied in five years, ever since the avalanche that claimed the life of her fiancée and cousin, leaving Olivia alive. Her guilt over not perishing with them is almost more than she can bear.

Will Olivia be able to maintain her distance from her new husband and protect her charge from the maniac who is determined to end her young life, or will she give into her feelings for the man she has fantasized over for years?

While the overtones of an inspirational are definitely in the book, it is not overdone at all. It is refreshing to read a romantic suspense that does not have a sexually driven romance. The romance between Greg and Olivia focuses on their growing love and plays done anything sexual, but the romance is very fulfilling, and I enjoyed it a great deal.

Olivia is a great character. She is fearless in her desire to protect Sheena. She has strong ties to her family and it’s obvious that her loved ones are central to her life. Although she never planned to sky again, to protect her charge, she faces her fear.

While Greg has never had a close relationship to his daughter, his love for her come through loud and clear. He will do whatever is needed to ensure Sheena’s safety, even if it means putting his own life in danger. It’s refreshing to have a male character in tune with his spirituality for a change, a man whose honor is part of his very being.

I am glad I have the opportunity to read All for Love. If you enjoy a tale with a sweet romance and a touch of faith intermingled in, yet with plenty of action and suspense, then you will enjoy this great book. Happy reading!

I received an ARC from the author for an honest review.
Read more
One person found this helpful
Helpful
Comment Report abuse

BK Bragdon
5.0 out of 5 stars Five out of five stars! Susanne does it again!
Reviewed in the United States on June 1, 2015
Greg Simmons, a famous author constantly looking over his shoulder, has lost everything he holds dear ... except his daughter. A tragic accident took away his daughter's mother, leaving him to raise the girl who blames him for her mother's death alone. But, someone is out to get Greg and destroy what he haves left, but he's not willing to give it up. For his daughter, he'll do anything to keep her safe safe. Even marrying a complete stranger--for real--to keep up the facade.

Olivia Marshall has also lost those she was close to in a terrible skiing/avalanche accident. Her once promising career in competitive skiing ended that day and she vowed to never get back on the slopes again. Her new job as a bodyguard to Greg Simmon's daughter will put her front and center to her greatest fears again, but she's nothing if not determined. Can these two make it through together, and alive?

Susanne Matthews tells a great story and All For Love was no exception in my case. She has yet to fail me with her romantic suspense's. I would say All For Love was a little different from her norm, considering there is a bit more religious undertones to this one. It was done without being a focus or overbearing, so I didn't mind. It wasn't the overall story teller, but rather, pieces of the character's persona that was important to them as a person.

Nonetheless, Mrs. Matthews keeps a reading turning the page, wanting to know what comes next, who is behind it all, and why. I read this book in two sit-downs (I only break for life, you know). Greg will tug at your heartstrings with his love and devotion. Olivia with tug,too, but she also makes the reader want to cheer for her throughout the novel. Sometimes, you just want to hug them, too.

Descriptive writing that makes the reader believe they're a part of the action, seeing the book through the character's eyes, a great plot, and awesome characters makes All For Love one of my favorite Matthews novels yet ...

Then again, I've said that before. Until the next one.
Read more
One person found this helpful
Helpful
Comment Report abuse

Kindle Customer
3.0 out of 5 stars Needs work
Reviewed in the United States on June 21, 2018
While this author show promise, publishing a book without a good editing job just wrecks it. So many typos, bungled rewriting and ridiculous mistakes with homonyms, homographs and apostrophes it was annoying to read.
Read more
Helpful
Comment Report abuse

Melinda De Ross
5.0 out of 5 stars A cozy, inspiring story about courage, obstacles and love
Reviewed in the United States on July 25, 2015
Although I was used to Susanne Matthews’s Romantic Suspense books, this one is an interesting change, which I enjoyed just as much. A cozy, inspiring story about courage, obstacles and love. It was interesting following the characters live through their fears and discover one another. I would recommend this feel good story to be read any time—before bedtime, on holiday, even on the subway on route to work.
Read more
One person found this helpful
Helpful
Comment Report abuse
See all reviews from the United States