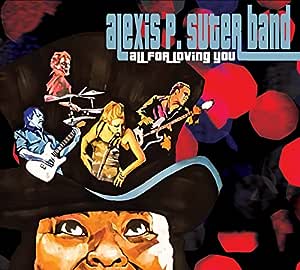 Secure transaction
Your transaction is secure
We work hard to protect your security and privacy. Our payment security system encrypts your information during transmission. We don’t share your credit card details with third-party sellers, and we don’t sell your information to others. Learn more
Details
Ships from
Amazon.com
Sold by
Amazon.com
Return policy: This item is returnable
In most cases, items shipped from Amazon.com may be returned for a full refund.
Read full return policy
All For Loving You has been added to your Cart
New & Used (6) from
$5.50 + $3.99 shipping

All For Loving You

Alexis P Suter is a twice nominated vocalist at the prestigious Blues Music Awards (2013, 2015) in the KoKo Taylor Vocalist of the year and Soul/Blues Vocalist categories presented by the Blues Foundation in Memphis, Tennessee.

A true vocal phenomenon, bass/baritone powerhouse Alexis P. Suter and her band began wowing audiences as regular performers at Levon Helm s Midnight Ramble and have been in high demand at North American Roots and Blues festivals, events, and venues ever since.

PB Foote
5.0 out of 5 stars Another GEM
Reviewed in the United States on June 19, 2016
Verified Purchase
Another amazing CD from an amazing band!!! There is no way you can sit still and listen to any one of these songs. And, prepare to have goosebumps listening to Alexis P. Suter's vocals on Let It Be ... treat yourself to this one, All For Loving You!!!
Read more
One person found this helpful
Helpful
Report abuse

Rodney Arnhold
5.0 out of 5 stars Love it. You rock Alexis
Reviewed in the United States on September 27, 2016
Verified Purchase
Love it . You rock Alexis !!!!
Read more
One person found this helpful
Helpful
Report abuse

Lori Helmke
5.0 out of 5 stars Love it
Reviewed in the United States on March 21, 2021
Verified Purchase
I love this CD! It gives u happy feet!
Alexis P Suter is a great Blues singer!
Read more
Helpful
Report abuse

kmd
5.0 out of 5 stars An Amazing CD for everyone's collection - a listening Experience
Reviewed in the United States on June 18, 2016
If you haven't heard this band and the baritone vocals of Alexis P. Suter, you are missing one of the best musical expressions in today's music scene. If you have been fortunate enough to see this band live, you know what I am talking about. Ms. Suter has sung with the likes of B.B. King and Levon Helm, both of whom were touched by the power and beauty of her song. She sings from her soul, and every song on this CD is evidence of this gift. While listed as a blues band, this band crosses over to rock, soul and even a beautiful touch of gospel. All styles which have influenced the band. All of the songs were written by band members. The guitarist, Jimmy Bennett, is a very skilled player. His slides and riffs are about as good as the best players out there. The songs written by him on the CD display his prowess on the guitar while complimenting and accenting the vocals of Ms. Suter. The first three songs on the CD are very powerful blues/rock tracks that will have you reaching for the volume to play them louder. Then there are the songs written by Vicki Bell, such as "Fool for You" a beautiful ballad, that is as tender as a song can be. Alexis's vocals on this song are like melting wax, and the restraint and emotion in her voice is complimented by skilled drums by Ray Grappone that are as soft and steady as rain. "Circumstance", written by Ms. Bell and Ms. Suter is a very relevant social commentary song that could easily be heard on FM radio. It epitomizes the message of this band which is love and kindness for all people. After listening to this song, you will never see the world quite the same. The vocals carry the message very deep inside. It is difficult not to be moved. The CD also has some great, bawdy songs written by Ms. Bell and Ms. Suter that will make you laugh out loud. The lyrics are amusing and if you know the band, you will understand that humor is part of their music. They don't ever take themselves too seriously that they can't enjoy the music and have some fun with those songs lending themselves to a good time. Ms. Suter refers to herself as "Big Mama", and that she is with her huge voice and identifying black top hat. These two songs pay homage to "Big Mama" in a big way ("Don't ya Tell" and "Every Shut Eye"). "So Long", is a powerful rock song with guitar riffs and chords that are very reminiscent of the Hendrix era. It is an excellent homage to psychedelic guitar rock with vocals that will stay in your mind for days. This song really rocks! Lastly, there is the band's cover version of "Let it Be" with a gospel flavor flavored by the incredible John Ginty on keyboard. This song is iconic at the roots festivals and club shows where the band plays, a crowd favorite. Ms. Suter takes this classic song and makes it her own. Her vocals are so deep and so intense - coming straight from her heart, that often the song ends with her in tears and the audience as well. There are several You Tube videos of her singing this song that demonstrate the intensity the band has while performing it. The recording of "Let it Be" on this CD is nothing short of miraculous. It is over six minutes of goosebumps and awe. I have played it several times and am moved over and over. Mr. Ginty's keyboard and Ms. Suter's vocals create a mood that cannot be described in words, it must be heard. It is one of those songs that will never leave you. It was beautiful when the Beatles recorded it and Ms. Suter brings a touch of gospel and an intensity that builds then explodes in the chorus. It is the song that truly demonstrates the amazing gift her vocals really are. Honestly, I cannot say enough good things about this CD. it is the work of a band of skilled musicians who work together to create very powerful music. Everything from Ms. Bell's complimentary background vocals to the strong bass line of Mr. Grappone and Peter Bennett are top-notch. This CD will be in my collection forever, it is timeless. It is one of the best I have heard in any genre in a long time. My hunch is that this CD will carry this band to fame. I cannot find a flaw on it. It is well produced, well mixed and each member of this band knows exactly how to work with the gifted vocals of Alexis P. Suter to create music that is so unique, skilled and breathtaking that it is difficult to imagine music getting any better than this.
Read more
2 people found this helpful
Helpful
Report abuse

Russ Heitz
5.0 out of 5 stars Powerhouse singer: Alexis P. Suter
Reviewed in the United States on June 26, 2017
This is an all-Alexis P. Stuter Band (APSB) song collection with the single exception of the final cut, the Lennon/McCartney masterpiece, “Let It Be.” All of the other songs on this 11-cut CD were written and arranged either by Alexis herself or the APSB ensemble. All the arrangements were done by associates Vicki Bell and Jimmy Bennet who also does excellent guitar work throughout.

The first cut, “Talk To Myself” is a powerhouse production that sets the tone for the big, deep, thundering voice of Alexis P. Suter. Hers is a voice that could threaten the stability of any wall, any venue. “Can’t Find a Reason” is a slow, pounding tear-jerker about the kind of deep, cutting love that gives nothing but pain and heartache. And Mama Alexis belts it out like she knows whereof she speaks. In spades.

“Another Place and Time” tells about the slow, pain-dripping agony of saying goodbye, a chore that makes you wish you were somewhere in another place and another time. “All For Loving You” is an up-beat, hard-driving wish for a magic castle, and a magic ability to drive away pain, wars, and everything bad. “Living In a World” asks the question, ‘What is wrong with you.’ It also provides a solution to the question: if you don’t want my love I’ll just go on living in a world without you. On this and several other cuts, John Ginty is featured on keys.

“Fool For You” is a moody, sad, heart-rending tale about a till-death-do-us-part kind of love that is, unfortunately, given to the wrong person.
“Don’t Ya Tell” is an up-tempo secret-keeper that warns the listener not to tell a soul that you saw big mama at five in the morning, at a place where she shouldn’t be. Guitar solos are by Jimmy Bennett.

All the arrangements for this set were done by Vicki Bell, who also provides vocal back-up, and guitar man Jimmy Bennett.

MRS P HARRISON
5.0 out of 5 stars they loved it.
Reviewed in the United Kingdom on December 31, 2016
Verified Purchase
Was bought as a Christmas present for a family member, they loved it.
Read more
Report abuse

Jacques Lessard
5.0 out of 5 stars Five Stars
Reviewed in Canada on September 4, 2016
Verified Purchase
Great music.A-1
Read more
Report abuse
See all reviews
Back to top
Get to Know Us
Make Money with Us
Amazon Payment Products
Let Us Help You
EnglishChoose a language for shopping. United StatesChoose a country/region for shopping.
© 1996-2021, Amazon.com, Inc. or its affiliates