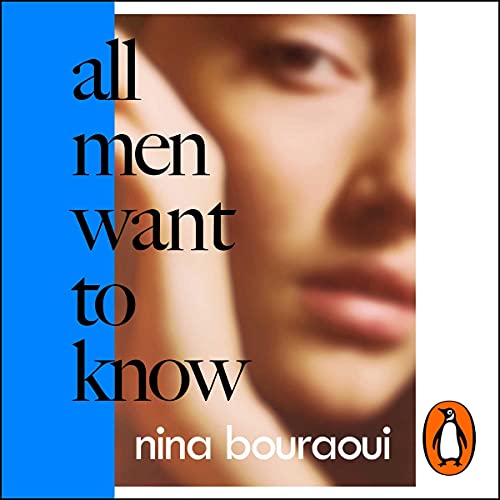 All Men Want to Know

All Men Want to Know traces Nina Bouraoui's blissful childhood in Algeria, a wild, sun-soaked paradise, with hazy summer afternoons spent swimming, diving and driving across the desert. Her mother is French, her father Algerian. When racial tensions begin to surface in their neighbourhood, her mother suffers an unspeakable act of violence that forces the family to flee the country.

In Paris, 18-year-old Nina lives alone. It's the 1980s. Four nights a week she makes her way to The Kat, a legendary gay nightclub, where she watches women from the sidelines, afraid of her own desires, her sudden and intoxicating freedom. In her solitude, she starts to write - and finds herself writing about her mother.

All Men Want to Know is a haunting, lyrical international best seller about mothers and daughters, about shame and sexuality, about existing between two cultures and belonging to neither. A phenomenon in France, this is a defining portrait of womanhood from one of Europe's greatest living writers.

Your audiobook is waiting!
Learn more about membership
List Price: $19.62
You Save: $2.45 (12%)
By completing your purchase, you agree to Audible’s Conditions Of Use
Sold and delivered by Audible, an Amazon company
Share

Keegan Hall-Browne
5.0 out of 5 stars Stunning!
Reviewed in the United Kingdom 🇬🇧 on October 28, 2022
Verified Purchase
So many parts sang to my lived experiences, to my soul and my heart, thank you for your integrity and open vulnerability. Highly recommend x
Read more
Report abuse