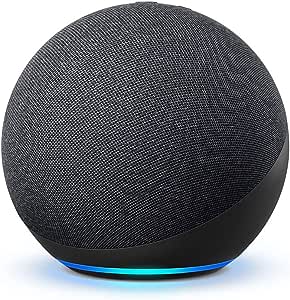 See what Alexa can do

Already have a smart home hub?

We recommend using Echo, Echo Dot, Echo Show 5, or Echo Show 8 to control your devices using just your voice by enabling the manufacturer’s skill in the Alexa Skills Store.

Use your voice to play a song, artist, or genre through Amazon Music, Apple Music, Spotify, Pandora, and others. With multi-room music, you can fill your whole home with music, radio stations, podcasts, and Audible using compatible Echo devices in different rooms. You can even pair your Echo with compatible Fire TV devices to feel scenes come to life with home theater audio.

Alexa and Echo devices are built with multiple layers of privacy protection. Echo smart speakers have a microphone off button that electronically disconnects the microphones. You also have control over your voice recordings and can view, hear, or delete them at any time. Learn more about Alexa privacy.

1. Plug in Echo and connect to the internet with the Alexa app.

Every day is an earth day

You don’t have to be an environmental scientist to make sustainable choices. We considered sustainability in the design of this device. Here’s how:

Amazon is building new wind and solar farms to produce clean energy equivalent to the electricity used by this device.

Track and manage the energy usage of your Alexa-connected devices with a new energy dashboard, coming soon to the Alexa app.

99% of this device’s packaging is made of wood fiber-based materials from responsibly managed forests or recycled sources.

The Reducing CO2 label applies to products certified by the Carbon Trust, that are lowering their carbon emissions year after year for the full lifecycle of the product. The Carbon Trust was formed in 2001 and introduced the world’s first carbon label in 2007. It produces its certifications to global leading and independently verified standards. The Carbon Trust has a mission to accelerate the move to a sustainable, low carbon economy.

4.4 out of 5 stars
4.4 out of 5
1,876 global ratings
How are ratings calculated?
To calculate the overall star rating and percentage breakdown by star, we don’t use a simple average. Instead, our system considers things like how recent a review is and if the reviewer bought the item on Amazon. It also analyzes reviews to verify trustworthiness.

C
4.0 out of 5 stars New Shape, New Processor, Better Sound
Reviewed in the United States on October 23, 2020
Color: CharcoalConfiguration: EchoVerified Purchase
The new Echo 4th Gen is a big change in aesthetics and design for the Echo line. The new spherical shape is wider and shorter than previous Echo versions, and now focus sound in one primary direction instead of 360 degrees. It adds an extra tweeter, and seems to produce more sound than previous versions. Here are my early thoughts so far, after using it for about 24 hours:

- SETUP. Setup was incredibly simple. I just powered the device on, and the Echo announced that it was ready for setup. I opened the Alexa app on my phone, and the new Echo was automatically detected and set up instantly. I didn't have to enter any information at all. It can't get any easier than this.
- BETTER SOUND. This new Echo has an extra tweeter, for a total of two 0.8 inch tweeters, and the same 3.0 inch Sub from the Gen 3 Echo. This new Echo is designed with the tweeters pointed forward, and the speaker placement seems to generate more bass also somehow, even with the same Sub as the Gen 3. All in all I think it sounds much better than Gen 3, with a little more bass and louder max volume. This could also be do to the sound-mapping feature that allows Echo to maximize the sound by detecting the acoustics and shape of the room. You can also pair two of these in stereo; and you are supposed to be able to use it as a speaker for your FireTV device, though I haven't tested that out yet.
- TEMPERATURE sensor included. Yes, you can ask Alexa what the temperature is, and it seems very accurate so far. This is a nice touch, and I look forward to doing more testing, to see if I can set up routines based on temperature.
- AZ1 PROCESSOR. This new Amazon processor promises better voice recognition and faster Alexa responses. In my testing so far, I have barely noticed a slight speed improvement (for example turning on certain room lights) but there are supposed to be upcoming updates that will make an even bigger difference in speed.
- ZIGBEE + Sidewalk Bridge. This comes with a Zigbee hub, just like previous versions of the Echo Plus. It also contains the new Sidewalk Bridge, which allows the Echo to use bluetooth and radio connections to connect to some smart devices at long range, and push data to the internet.

- No 360 degree speakers. While I personally prefer the sound of this new version, some people might miss the 360 degree speaker setup of previous Echo generations. It certainly might lead to a situation where the ideal placement of the Echo in your room could be different.
- White power cord. This is minor, but a strange choice. No matter what color Echo you get, the power cord is white. Some people might find that annoying.
- Voice detection is not great while loud music is playing. This surprised me, as previous generations haven;t really struggled with this in my experience. I'm not sure if it is because this speaker is much louder, but Alexa hasn't heard me a few times when I talked while the music was playing at max volume. This could be annoying if you often listen to very loud music.

- Aesthetics. I think I preferred the look of the cylinder design, instead of this new sphere shape. This is totally personal preference of course. I also wish the entire sphere was fabric, instead of being plastic on the back side. Some people might prefer the ball shape though, so that is up to you.

All in all, I'm keeping this new Echo because of the better sound and faster responsiveness, but it is not really a massive upgrade. Pretty decent so far, I'll update this review and try to answer any questions in the future!

* (If you found this review to be informative and/or helpful, please click "Helpful" to let me know. Thanks! ) *

D. W.
2.0 out of 5 stars not a fan
Reviewed in the United States on October 22, 2020
Color: CharcoalConfiguration: EchoVerified Purchase
I actually prefer the more balanced sound from my echo plus (2nd gen) without needing to mess with the equalizer. I also prefer the 360° sound from the echo plus. after going back-and-forth I’ve personally experienced the microphones on the echo plus pick up my voice better. in my opinion this new version just sounds a little bit louder with more bass even though they both have the exact same drivers with the exception of the new one having an extra tweeter which doesn’t really make a difference in the sound. I actually had to turn down the bass just a little because it sounded a little... messy. i’m not really sure why they completely changed the design and got rid of the 360° sound and made it a directional sound speaker instead. i’m a little confused. One more thing I noticed about the new speaker is when the volume goes up the bass goes down which is very common for all these speakers and most Bluetooth speakers but it seems especially evident in this newest version of the echo. they could’ve at least made the bluetooth option volume sync with your phone with this new version. and of course it wasn’t compatible to pair with my echo plus for stereo. ok i’m done.
Read more
258 people found this helpful
Helpful
Comment Report abuse

Stephanie M Matamoros
2.0 out of 5 stars Ehhh
Reviewed in the United States on October 22, 2020
Color: CharcoalConfiguration: EchoVerified Purchase
Updating my review to one less star. I have an Alexa in my kitchen, my living room (this one) , and my bedroom. Both are dots. You can be standing in the living room talking to the device over it, and the other Alexas respond to you. The microphone is awful. Thinking about returning. I stopped delivery on the 3 to order the 4 when it came out. Now, I wish I didn’t.

My black device came with a horrible looking white aftermarket cord that is not Amazon original ; at least match the color. It sounds ok; I have Alexa devices all around my house and compared to the dot, I think it’s honestly just ok. Not amazing.
Read more

Amazon Customer
2.0 out of 5 stars Not impressed is an understatement..
Reviewed in the United States on October 22, 2020
Color: CharcoalConfiguration: EchoVerified Purchase
Charcoal color, Amazon Echo 4th Generation arrived/came with a friggin white power cord... Amazon, you got to be kidding me.. I might add, this 4th Generation is poor poor, compared to the 3rd Generation Echo. Suggest people skip this iffy 4th Generation offering, if you have a 3rd Generation Echo. Tried for a few days, but am returning.
Read more
164 people found this helpful
Helpful
Comment Report abuse
See all reviews

Haider
5.0 out of 5 stars Well worth it
Reviewed in Canada on November 22, 2020
Color: Limited Edition (PRODUCT)REDConfiguration: EchoVerified Purchase
This is very good and amazing easy to setup by downloading the Alexa app. The colour is great and it works amazing especially the smart plug control. Well worth the investment
Read more
Report abuse
See all reviews