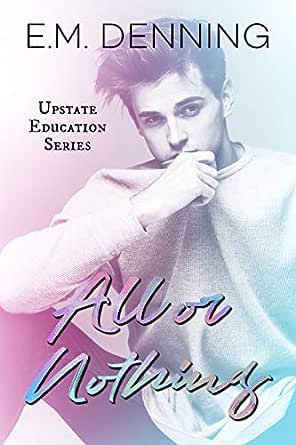 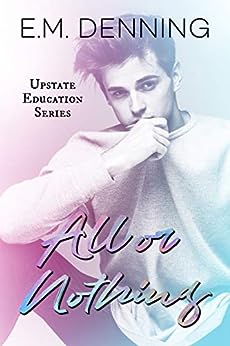 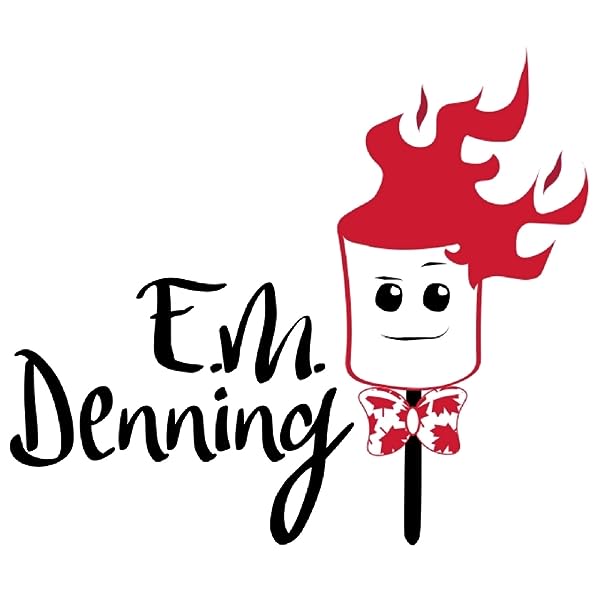 All or Nothing: Upstate Education Kindle Edition

4.5 out of 5 stars
4.5 out of 5
30 customer ratings
How does Amazon calculate star ratings?
Amazon calculates a product’s star ratings based on a machine learned model instead of a raw data average. The model takes into account factors including the age of a rating, whether the ratings are from verified purchasers, and factors that establish reviewer trustworthiness.
Top Reviews

Abrianna
5.0 out of 5 stars Will and Dean and Patrick and Shawn
Reviewed in the United States on October 3, 2019
Verified Purchase
This is not only my favorite book in the Upstate Education series but my favorite E.M. Denning book.

One of the main selling points for me when it came to All Or Nothing, was the fact that we were finally getting Will and Dean's book. I've wanted their book since Half As Much. I loved them from the beginning and I hoped they would eventually get together. What I didn't count on what Shawn and Patrick. Not gonna lie, Shawn seemed a bit too excitable for me in Never Enough. And then I read this book and now I absolutely adore him.

Relationships are work, even if you have only two people. With four that leaves room for error times four. One of the biggest things in a relationship is communication. What Will and Dean were doing before they met Shawn and Patrick was not communicating. My heart was breaking for them at first. Because more than anything I wanted them to work out and they couldn't figure themselves out. It hurt to see them hurt.

Patrick has his own insecurities after his husband and their boyfriend leave him to be together. It left him afraid of being left behind again, which made the whole communication thing tricky and I wanted to scream. I did scream a bit. Because the four of them were perfect. They worked well together, they just needed to talk, which Patrick didn't do and AHHHH!

Shawn kind of ends up being their glue, but there's so much more to them by the end of the book. They all eventually figure themselves out and become what they were meant to be. Is it complicated? Yes, but that's a relationship for you.

This type of book isn't easy to pull off, but E.M. Denning does it brilliantly. It was believable, I felt like these four could have a functioning, healthy relationship. It could have been confusing, trying to navigate the intricacies of the different pairings, but it wasn't. The writing made it seem almost flawless, even with the hiccups the characters had while they were finding their way.

All Or Nothing gave me everything I wanted and then some. It was the perfect way to round this series out with and I'm going to have to come back to Upstate because I am not done with these boys yet. I used to say I only had a handful of books I could re-read and still enjoy like it was the first time. That list is growing with every single book E.M. Denning puts out. I cannot wait to see what comes next from her talented hands.
Read more
One person found this helpful
Helpful
Comment Report abuse

Emma Brown
5.0 out of 5 stars Hot m/m/m/m
Reviewed in the United States on September 29, 2019
Verified Purchase
Once again I am reminded why EM Denning is a one click author for me. Getting to know Will, Dean, Patrick and Shawn was an absolute blast. Watching the chemistry unfold, and seeing them figure out who and what they are was a delight.
Read more
Helpful
Comment Report abuse

Melisha B.
3.0 out of 5 stars Not my favorite
Reviewed in the United States on September 8, 2019
Verified Purchase
This wasn’t my favorite but it was worth reading if you’re already in the middle of the series. For me the 4 guys just never really clicked as one relationship and Patrick drove me insane with all of his back and forth.
Read more
Helpful
Comment Report abuse

Leci F
5.0 out of 5 stars Loved everything about this story
Reviewed in the United States on August 30, 2019
Verified Purchase
What a wonderful book about a beautiful polyamorous relationship! I loved each character and the story! The dynamics seemed so authentic! Every book in this series has been outstanding!
Read more
Helpful
Comment Report abuse

Breanna B
4.0 out of 5 stars Mmmm is my jam
Reviewed in the United States on September 28, 2019
Verified Purchase
This was my first em denning story and I can rightly say it won’t be my last. Loved the connection between the characters.
Read more
Helpful
Comment Report abuse

HockeyfanT
5.0 out of 5 stars Sexy and emotional
Reviewed in the United States on August 28, 2019
This is another fantastic book in the Upstate Education series. Shawn, Patrick, Will, and Dean are each such good men, who deserve all the love in the world. They find that love together. I appreciate that the couples-and-more in this series find love that isn't a cookie-cutter version of happiness. They stretch their wings and reach for things that some would consider taboo. They are beautiful in their desire. These four men find their soulmates in a lovely poly romance.
This author is gifted with the ability to write characters who completely steal my heart. During different parts of this story, each man took over and ripped me to shreds. Each had moments of doubting himself and his ability to hold on to the others. Each wonderful man had times when he was unable to see himself the way the others saw him. Every time, it was up to his lovers to show him how important he was. I am not ashamed to say that I teared up more than once. While the book is full sex and lust, it is also full of devotion, friendship, family, and love.
These stories are not for everyone, but for someone who is open-minded and believes that a fairytale-type ending can be more than just two lovers together forever in happy monogamy (not that there's anything wrong with that!), this is a wonderful book in a fabulous series. Highly recommended!
Read more
Helpful
Comment Report abuse

Maewolf
5.0 out of 5 stars Love, honesty, multiple partner
Reviewed in the United States on August 30, 2019
If you like MMMM Romances, or love and relationships of every variety, this is the book for you. Not everyone's idea of commitment is the same and No two relationships are the same. As long as everybody is in agreement and nobody's feelings are hurt, what should anybody else's opinion matter. Patrick, Shawn, Dean, and Will have this type of relationship. Will and Dean have been in love with each other forever but they thought things could never work out with just them. Shawn and Patrick are both in a new relationship and not apposed to an open relationship, start one with Will and Dean too. The four work through all their personal doubts and find that the love they share is enough for all of them. As long as they are all honest, everything is consensual, they can make their unique relationship work. Read as Will, Dean, Shawn, and Patrick find their happily ever after in the next book of the Upstate Series. All books can be read as standalones, but definitely worth reading together. I hate to see the series end, but I truly loved every book in it. A unique mix of characters and relationship types. Would I recommend this book? Yes. Would I read it again? Yes.
Read more
Helpful
Comment Report abuse
See all reviews from the United States