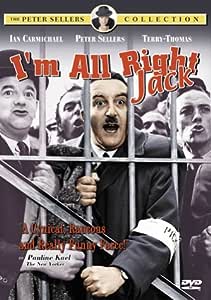 After a decade on radio, Peter Sellers set out on the road to international stardom in 1959's I'm All Right Jack. Sellers played both Sir John Kennaway and, unforgettably, the trade union leader Fred Kite (he had taken multiple roles in The Mouse That Roared and would do so again in Dr. Strangelove). The result is laugh-out-loud comedy with a satiric edge, lampooning the then-burning issue of industrial relations. Bertram Tracepurcel (Dennis Price) plans to make a fortune from a missile contract, a scheme that involves manipulating his innocent nephew Stanley Windrush (Ian Carmichael) into acting as the catalyst in an escalating labor dispute, from which the socialist Mr. Kite is only too keen to make capital. Management and labor both have their self-serving hypocrisy dissected in this ingenious comedy, which is actually a sequel to the military comedy Private's Progress (1956), but stands independent of the earlier film. Both films were made by the brothers John and Roy Boulting, directors and producers of such British classics as Brighton Rock (1947), Seven Days to Noon (1950), Carlton-Browne of the F.O. (1959), and Heavens Above (1963). The superb cast of I'm All Right Jack also features Richard Attenborough, John Le Mesurier, Margaret Rutherford, and Terry-Thomas. --Gary S. Dalkin

Pages with related products. See and discover other items: all movies on dvd, peter sellers