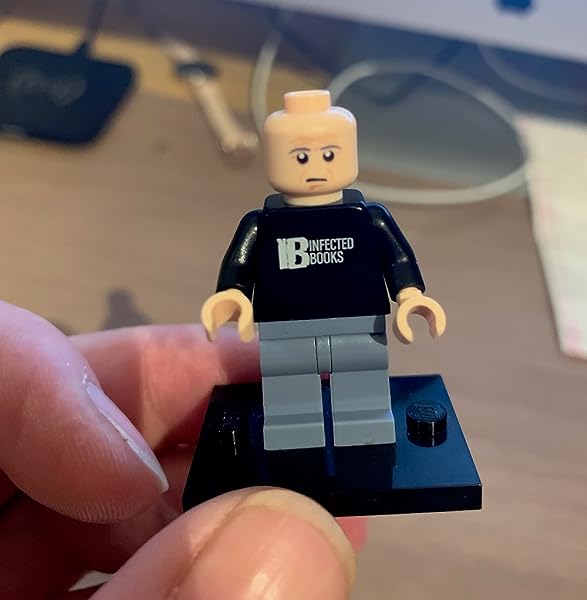 Praise for All Roads End Here:
"Moody’s suspenseful second Final War horror novel, continuing the second series set in the bleak and anger-filled Hater world, is a gripping take on the zombie apocalypse.... Fans of zombie thrillers will not be disappointed." ―Publishers Weekly

"Great characters, great story, nobody does the apocalypse like David Moody." ―Craig DiLouie, author of One of Us

"Moody has once again delivered a great post-apocalyptic story, maintaining his position at the summit of British horror..." ―This is Horror blog

Praise for One of Us Will Be Dead by Morning:

"A bloody fun ride... Another wetwork nightmare that should delight fans of Haters and intrigue writers who wallow in the genre." ―Kirkus Reviews

"Moody really knows how to write creeping, claustrophobic terror, effectively sneaking up on his readers and, finally, scaring the life out of them. Top-drawer horror." ―Booklist, starred review

"This gloomy psychological horror thriller contains a surprising twist of dystopia, a promising note for the series that it launches." ―Library Journal

"Think of a mashup of George Romero and Agatha Christie, and you might have an idea of what awaits you." ―The Book Report Network

"Fear stems from isolation and rumor, only to be reinforced by quick and brutal violence. This is gut-wrenchingly realistic survival horror." ―Horror Underground blog

"David Moody has a knack for making me feel like a fly on the wall, right there amongst the action but not noticed by the players." ―2 Book Lovers Reviews blog, five stars

"The novel rips you out of your safe and sung world and thrusts you into an environment where anyone can turn on you in the blink of an eye. It’s hard-hitting, head-poundingly tense, and drenched from head to toe in blood-splattered cruelty." ―DLS Reviews blog

"Moody truly excels at wicked pacing and sharp dialogue, and One of Us Will Be Dead by Morning is no exception." ―Ghastly Grinning blog

"One of Us Will Be Dead by Morning is an insightful, rewarding look at physical and social isolation, trust and reaction to adversity when the flight part of "fight or flight" is taken away. It's clever, convincing fiction, claustrophobic fiction." ―SFBook Reviews

"A gripping, visceral read, glistening with gore and studded with extreme brutality and with a relentlessly downbeat tone which will please lovers of hard-edged apocalyptic fiction. We await the arrival of book two in the series with considerable interest." ―Starburst

From the UK, DAVID MOODY first self-published Hater on the internet in 2006, and without an agent, succeeded in selling the film rights for the novel to Mark Johnson (producer, The Chronicles of Narnia film series) and Guillermo Del Toro (director, Hellboy, Pan's Labyrinth). With the publication of a new series of Hater stories, Moody is poised to further his reputation as a writer of suspense-laced SF/horror, and "farther out" genre books of all description.

Start reading All Roads End Here (The Final War Book 2) on your Kindle in under a minute.

4.9 out of 5 stars
4.9 out of 5
30 global ratings
How are ratings calculated?
To calculate the overall star rating and percentage breakdown by star, we don’t use a simple average. Instead, our system considers things like how recent a review is and if the reviewer bought the item on Amazon. It also analyzes reviews to verify trustworthiness.
Top reviews

Amy Braun
5.0 out of 5 stars Great Survival Horror
Reviewed in the United States on March 1, 2019
The Haters are back and fiercer than ever! The latest instalment of David Moody's trademark series focuses on survival and hard choices, and is ultimately one of the more intense books in the series. There are unexpected twists all over this bleak tale, and the ending leaves me wondering what will happen next.

The story is fairly well paced, and moves between main character Matt adjusting to returning home after months in dangerous, Hater-infested lands, only to find himself unable (or unwilling) to readjust. His story leads to some startling revelations as he tries to bring safety and comfort to the people he must care for. I like the way this twist unfolded, and definitely felt the tension when it became apparent that the dangers the survivors face were far more serious than lack of food and sanitation.

Matt was my favourite character, a man who understands the world is no longer black and white and won't hesitate to put his loved ones before others. I also enjoyed side character Jayce, who gives new meaning to the phrase "internal struggle." I tried to sympathize with side characters like Jason and Jen, but I just found Jason to be a jerk and Jen to be a little too needy. They were of course a little more complicated, but they also drove me kinda mad.

That said, I'm always super excited when a new HATER book is released, and this new story fits in the bleak, brutal world and is something all survival horror fans will love.

G
5.0 out of 5 stars Great sequel to the last book. A real page turner!
Reviewed in the United States on February 18, 2019
As a sequel to “One of us will be dead by morning”, this book is spot on and even better than it’s predecessor. I just finished this book today and all I have to say is, keep up the good work Mr. Moody! I hope you’re reading this. I’ve read 15 of his books/compilations now and this is one of my favorites (second only to “Straight to you”). I’ve been a member of Amazon since the late 90s and have never felt compelled to review anything. Not once. Given the fact David Moody hit this one out of the park I had to do so. The pace picks up throughout the book and the final 100 pages keep you on the edge of your seat. If you like his books, don’t hesitate to get this one!
Read more
One person found this helpful
Helpful
Comment Report abuse
See all reviews

C J Duffy
5.0 out of 5 stars Hater is the best series of books I’ve read!
Reviewed in the United Kingdom on February 14, 2019
Verified Purchase
Easily the best series of books out there and All Roads End Here just adds to the brilliance!
Loved every word on every page and, although this is part 5 of the Hater series, I genuinely hope there are many many more to come!

Mitchell
5.0 out of 5 stars One of David Moody’s best books in the Hater series!
Reviewed in Canada on October 5, 2020
Verified Purchase
I literally could not put this book down, it was so fast paced and the characters were compelling and interesting which made for a wild ride!
The only survivor of “One of Us Will Be Dead by Morning” Matt makes his way back through Hater territory, to the only person that keeps him going, his agoraphobic girlfriend, Jen! She is still living in their apartment in what is now called the walled city of “Midlands Regional Protection Zone” but the zone is not all what it seems and ?Matt will do anything to protect the love of his life, no matter what it costs him or who he has to ally with no matter how shady.
Matt has been threw Hell already to make it back to make sure his girlfriend is safe But how much more can he endure once he finds her?