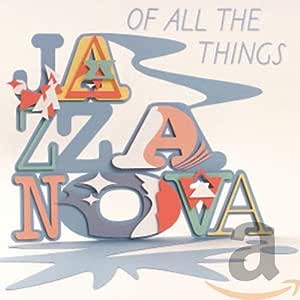 Of All The Things

Mentored by Giles Peterson, the six member Berlin-based DJ collective Jazzanova has created a compelling fusion of musical genres on their 2008 studio album, Of All The Things. Jazzanova has built a strong and loyal following among DJs, musicians, and music fans around the globe. They have leant their talents to a diverse roster of artists including Lenny Kravitz, Common, Azymuth, and Calexico. Jazzanova set out to compose an album that is interconnected, composing each track, recording live vocals and instrumentals, selecting and creating samples from tracks already created for this album. Featured vocalists include Leon Ware, Dwele, Phonte, Paul Randolph, Ben Westbeech, Jose James, and more. Jazzanova is: Alexander Barck, Claas Brieler, Jrgen von Knoblauch, Roskow Kretschmann, Stefan Leisering, and Axel Reinemer

4.5 out of 5 stars
4.5 out of 5
27 global ratings
How are ratings calculated?
To calculate the overall star rating and percentage breakdown by star, we don’t use a simple average. Instead, our system considers things like how recent a review is and if the reviewer bought the item on Amazon. It also analyzes reviews to verify trustworthiness.

Mark T
5.0 out of 5 stars A soulful nod to the past
Reviewed in the United States on October 24, 2008
Verified Purchase
This may not be what you expect. So check out their myspace page to preview a few tracks from this disk...

The unifying sound here harkens back to the mid-seventies--lush strings and horns, energetic beats, itchy guitars, soulful harmonies and soaring lead vocals. Some may feel that this more closely resembles Gnarls Barkley than previous Jazzanova disks, but this album could have come from no one else. A sensitive ear will recognize the Jazzanova sound buried deep within the mix. But this album isn't so much about the Jazzanova sound. It's about the songs. And the songs are wonderful--with terrific performances and fine writing.

And while this may lack some of the in-your-face dynamics and energy of the remix albums or the "In Between" CD, this new offering has a heart and soul unlike anything Jazzanova has ever done before.

Dillos
5.0 out of 5 stars One of the best albums you never heard of
Reviewed in the United States on July 23, 2011
Verified Purchase
I knew about Jazzanova a while back during their In Between album. This album combines their jazz inspired ensemble and uses pop and hip hop to create this album. The album is rare because it's one of the few albums you should listen from start to finish. Two you can easily find at least two or three songs you would like. This album have something for anyone in your car wondering who these German artist are. My personal favorites are the songs featuring Phonte, and the track, I Can See. I don't recommend purchasing songs individually, just the purchase the album entirely and your ears will thank you.
Read more
Helpful
Comment Report abuse

Amazon Customer
5.0 out of 5 stars Must have on your collection
Reviewed in the United States on January 11, 2020
Verified Purchase
I love this re-issue. Superb compilation and it sound phenomenal.
Read more

Mizukan
5.0 out of 5 stars Five Stars
Reviewed in the United States on January 23, 2015
Verified Purchase
What an amazing compilation!! You will LOVE it!
Read more
Helpful
Comment Report abuse

chicanoize
5.0 out of 5 stars Jazzanova review
Reviewed in the United States on July 27, 2011
Verified Purchase
Great album from Berliner producers Jazzanova. Good music, tunes, melodies of the recent new style called nu jazz. As for the Amazon's shipment, it was deliveried before what they'd said to me... :)
Read more
Helpful
Comment Report abuse

Mike Newmark
5.0 out of 5 stars Of All the Things
Reviewed in the United States on December 5, 2008
Of all the things Jazzanova could have done for a sophomore effort in the seven interminable years since their electro-jazz landmark In Between, they've recorded a soul record. How about that. Granted, these six German producers have been cutting their teeth on soul music and its offshoots with a baker's dozen of tasteful mixes, so the direction they've taken on their newest batch of own-productions isn't completely surprising. And yet, Of All the Things doesn't seem at first blush like the whiz-bang showstopper that people were prepared for. That's because In Between was borderline-perfect, a cosmic trip through some of the classiest electronic jazz ever committed to disc, and likeminded musicians followed in Jazzanova's footsteps as if they were the pied piper. But it's also because--and this is the key distinction between the two records--In Between pointed the way to the future of electronic listening music, while Of All the Things concerns itself almost solely with the past. Jazzanova are, in fact, in love with the past, and as we well know, love can shoot people's attention and commitment up to stratospheric levels. And it's this commitment to both their craft and doing right by their forebears that sneakily makes this record their second resounding success in a row....

Of all the eras in the history of soul music they could have catapulted us into--`60s Motown, early-'80s garage, `70s quiet storm R&B--they've chosen all of them. Jazzanova play kickball with decade-divided genres as though the lines between them simply didn't exist, seamlessly moving from hip-hop to funk to quiet storm to MOR urban jazz, all going back in a direct line to Sam Cooke and the Isley Brothers. If Of All the Things is the `60s, `70s, `80s and `90s rolled into one, the production positively effulges with the vitality of the 21st century. What could have been a dusty old time capsule is instead a celebration of the music that has guided us to where we find ourselves now.

Of all the elements they could have squelched this time around, they've decided to downplay the beatwork. It's a risky move, considering that complex rhythms were their debut's featured attraction, and one listen to the drums on "L.O.V.E. and You & I", "Soon" and "Another New Day" from In Between is enough to cause temporary paralysis. But if Jazzanova had to 86 the maddening beatwork in order to give the more melodic components the floor, so be it. Of All the Things is a rich, bafflingly mellifluous listen, the lines of instrumentation mixed so perfectly that you'll wonder if there's an electronic producer's hall of fame that Jazzanova could be inducted into somewhere. To use "What Do You Want?" as an exemplar, pay attention to how a slippery, Ndegeocello-esque bass underpins the song and tilts it onto a slant, and how the least cheesy violins in the history of nu-jazz provide beautifully conceived accents and counterpoints to singer Joe Dukie's primary melody. There are about 15 different things going on in "What Do You Want?", and every single one of them complements something else and contributes to the success of the final product. So, sorry; there just isn't any room for In Between`s beat bonanza around these parts.

Of all the singers and collaborators they could have chosen to work with, they've selected those who align with the songs based on feel alone, regardless of star power or even artistic merit. No will.i.ams, Kanye Wests or Beyoncés; instead, Jazzanova have mined a wealth of diverse, largely underground musicians to bring their concept to fruition. Phonte of the Foreign Exhange lends his pipes to both "Look What You're Doin' to Me" (as a singer) and "So Far from Home" (as a rapper); he's not the most acrobatic of vocalists, but he understands what the songs require of him and fits inside the music like a hand into a glove. Thief's Sascha Gottschalk, with his earthy tenor, couldn't have been a better choice for the jaunty violin piece "Lie" that plays--at least instrumentally--like an alternate version of "Eleanor Rigby". Newcomer Paul Randolph takes the prize with the two best cuts here, lending his dexterous, rangy croon to the feel-good funk party "Let Me Show Ya" and the exploded elevator bossa of "Lucky Girl". And while "Rockin' You Eternally", featuring Dwele and vintage Motown singer Leon Ware, isn't the most stunning moment on the disc, it's possibly the sweetest: Ware and Dwele perform a call-and-response duet over the music that one pioneered and the other salvaged--old and new, past and present, walking side-by-side.

Of all the ideals Jazzanova could have striven for on their first album since the Paleozoic era (2001), they aimed and shot at...economy. Hardly the hour-plus opus that In Between was, Of All the Things packs a mind-boggling array of ideas into its 12 brief, wholly digestible songs. Not since Stereolab's Emperor Tomato Ketchup in 1996 has a pop record thrown so much at the wall while sounding so divinely simple. How strange that Jazzanova's latest appears so underwhelming on paper: a retro soul album of modest length, without complicated rhythms, big stars, or signposts that point to where electronica is ultimately headed. But the highlights (and there are many) don't lie: this is an excellent record, one that's beaten the odds and flipped our expectations, and it sounds--of all things--absolutely triumphant.

This is not the Jazzanova you know. If you enjoyed Jazzanova's earlier work, you'll find this CD does not sound like Jazzanova at all. This CD is 1960's Soul/R&B but cut in 2008. I'm not going to say it's bad, there is allot of talent in the cuts. But it is devoid of what you would expect. I just posted mine for sale used; I didn't expect this music & will have to be more careful in the future.

If your new to Jazzanova, don't judge them by this CD. Audition some of their earlier work to get a feel for what this very talented group was once about.
Read more
Helpful
Comment Report abuse
See all reviews

gylo
5.0 out of 5 stars Five Stars
Reviewed in the United Kingdom on December 6, 2014
Verified Purchase
Arrived on time and pleased with the item
Read more
Report abuse

maureen reeves
5.0 out of 5 stars Excellent album, really soulful
Reviewed in the United Kingdom on June 17, 2009
Verified Purchase
well worth the wait, every track amazing.