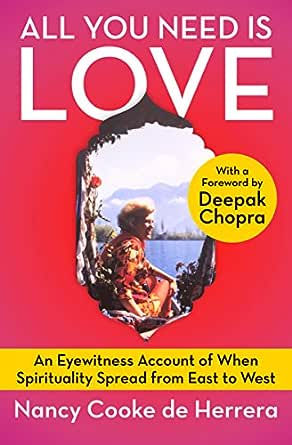 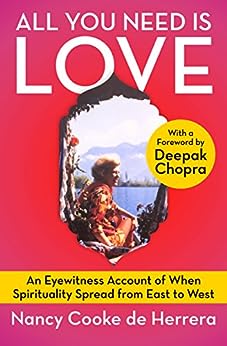 All You Need Is Love: An Eyewitness Account of When Spirituality Spread from East to West Kindle Edition

“I was incredibly touched by Nancy Cooke de Herrera’s moving tale of her spiritual journey in self-discovery, told without sacrificing an ounce of her joyous personality.” —Dominick Dunne

“I could not put it down. I absolutely loved it. It will appeal to everyone sometime, but for meditators it is great.” —David Lynch

Nancy Cooke de Herrera (1922–2013) was a world-traveler, teacher of meditation, and author of two memoirs, All You Need Is Love and Never Tango with a Stranger. Born in California, de Herrera was appointed “US Ambassadress of Fashion,” as she gave presentations on American culture and fashion around the world on behalf of the State Department during the 1950s. Her travels led her to India, where she met Maharishi Mahesh Yogi, the founder of Transcendental Meditation. She studied at his ashram alongside other visitors, including the Beatles and Mia Farrow. As Maharishi’s publicist, de Herrera spread his message of peace to the West and helped pioneer the highly influential 1960s spirituality movement in the United States. She went on to teach meditation to troubled youth, HIV/AIDS patients, and celebrities such as Madonna, Greta Garbo, and Lenny Kravitz.

Semaphore
5.0 out of 5 stars Love bomb of a book!
Reviewed in the United States on January 6, 2018
Verified Purchase
As someone who has practiced transcendental meditation for over 45years found this to be a kind but yet accurate assessment of the changes in the organization. The technique will hopefully never change but the people at the top make all the difference in how the knowledge is passed along to others. A toast to all those who were with Maharishi in the beginning! Jerry Jarvis, take a bow. We need more like you.
Read more
2 people found this helpful
Helpful
Comment Report abuse
See all reviews