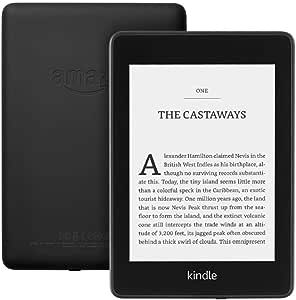 4.6 out of 5 stars
4.6 out of 5
468 global ratings
How are ratings calculated?
To calculate the overall star rating and percentage breakdown by star, we don’t use a simple average. Instead, our system considers things like how recent a review is and if the reviewer bought the item on Amazon. It also analyzes reviews to verify trustworthiness.

PLIMMER
3.0 out of 5 stars NO BETTER THAN OLD ONE
Reviewed in the United States on January 23, 2019
Verified Purchase
I HAVE MY NEW KINDLE PAPERWHITE NOW FOR A FEW WEEKS. IF I WAS EXPECTING SOME STARTLING IMPROVEMENTS OVER MY FOUR YEAR OLD KINDLE, I GOT A ZERO. THE NEW ONE BOASTS A SCREEN DEFINITION OF 300 DPI VS 167 FOR THE OLD ONE - I CAN'T TELL ANY DIFFERENCE. THE NEW MEMORY IS 8 GB VS 1.5 GB FOR THE OLD ONE - SINCE I NEVER LOADED MORE THAN 0.5 GB ON THE OLD ONE, THE NEW 8 GB IS SUPERFLUOS FOR MY NEEDS. PART OF THE REASON FOR THE LOW STORAGE I USE IS THE SUPERB AMAZON "CLOUD" STORAGE SYSTEM; SO THAT THINGS I AM NOT CURRENTLY WORKING WITH I SEND THEM TO "CLOUD". THEN THERE IS THE WATERFPROOFING - SINCE I NEVER GOT THE FOUR YEAR OLD ONE WET, AGAIN ANOTHER SUPERFLUOUS ITEM. THEN THERE IS THE SCREEN LIGHTING - AGAIN I CAN'T TELL ANY DIFFERENCE BETWEEN THE NEW AND THE OLD.

HAVING SAID ALL THIS I MUST SAY THE NEW AND THE OLD KINDLE'S PROVIDE SUPERB READING CONVENIENCE AND I HAVE NO HESITATION IN HIGHLY RECOMMENDING THEM. THINK CAREFULLY ABOUT YOUR NEEDS WHEN BUYING A KINDLE PAPERWHITE, AS THE CHEAPER MODELS STILL PROVIDE A SUPERB READING EXPERIENCE.
Read more
277 people found this helpful
Helpful
Comment Report abuse

James
2.0 out of 5 stars Disappointed Kindle lover
Reviewed in the United States on March 20, 2019
Verified Purchase
I bought two All New Kindle Paperwhites (International Version) in late November last year: one for my wife and one for myself. My Kindle began to malfunction within days. It jumped pages, inexplicably went to the store while I was reading and randomly marked words and brought up the dictionary of its own accord, amongst other strange behavior. After my complaint to customer support, Amazon were very prompt in replacing my defective Kindle in early January of this year with one that arrived with no packaging. Was it a reconditioned one?

My wife’s Kindle began to display the same erratic behavior in late January. That, too, was promptly replaced and is, so far, still working normally.

In March my replacement Kindle began to malfunction in much the same manner as the original.

So, I am now about to begin the process of contacting Amazon customer support in the hopes of exchanging my All New Paperwhite for one that works. Wish me luck.

In the light of the above disappointing experience, a few comments about the All New Kindle Paperwhite while it worked. In my view, it is less crisp, more sluggish than my trusty 2013 Paperwhite. It is not as responsive to a tap to turn a page. Starting up now involves a waiting period. It appears to me that the definition of the print is not as sharp as my old Paperwhite. The dictionary and translations do not respond as quickly.
Would I recommend that somebody buy the All New Kindle Paperwhite (International Version)? See below.

UPDATE. 2/4/19
In response to my complaint, a brand new Kindle was delivered about a week ago. It has worked perfectly so far and I am, once again a happy customer. In my opinion the new Kindle is an improvement over the previous model in that it is slightly smaller and lighter, thus even easier to hold and use. Now I am able to say that the print is the same quality,if not better. The annoying waiting period on start up can be switched off. So, it was difficult for Amazon to improve on an almost perfect product, but I think they have done so. It is an absolute essential for the avid reader.

UPDATE 24/12/2019
Christmas Eve, and my replacement Kindle, the third, is now malfunctioning in the manner originally described above. Is it me, is it the Kindle, how long are they meant to last? I don’t know. My new year will begin with seeking a refund or replacement from Amazon. A time consuming exercise. This is not what I imagined the Kindle experience would be.
Read more
145 people found this helpful
Helpful
Comment Report abuse

Merry Bell
3.0 out of 5 stars Not as convenient as the old one
Reviewed in the United States on January 4, 2019
Verified Purchase
I had an older kindle, I'm not sure what it was called, but it packed up after 6 years. I would have bought the same model, but it appeared it wasn't available. The old model had page turning buttons on both sides, so it didn't matter which hand it was being held in, I could turn the pages with my thumb. This one is a touch screen, and is annoying, as sometimes, my holding fingers touch the screen, and the pages turn when I don't want them to. Also, I can only turn the page on the one side of the screen, so I have to change hands. Also, the old model had no back light, which I understand is better for eyes. This one has a back light, even though I turn it right down to as dim as I can. I daresay there are some new features that may be more convenient, but in the every day use, it does not function as well.
Read more
124 people found this helpful
Helpful
Comment Report abuse

Bellaro
4.0 out of 5 stars I like it.
Reviewed in the United States on November 24, 2018
Verified Purchase
I have my old kindle keyboard gen 2 for 8 yrs now and the battery is slowly bled out. Having this one impress me in a lots of ways. The built in LED lights look impressive. Though for reading in the dark, the texts isn't as crisp as I'd like and there's a few tiny bright defect in the screen. The inverted screen does help a little. But compare to my old habit of reading in complete darkness at night on my OLED screen smart phone with really black background and pale yellow texts, it just not as easy on the eyes as that. I think this works better with some ambient light in the room. And also the battery, having this for a day only, I read with full light on, wifi on, for 1 hr and it drop from 100 to 90%. I don't think it will last weeks. I'll see how well it fare as I use it.
So for the main reason I bought this, I want a glare free, eink device that can handle some pdfs as well as ebooks. The ebooks functions is spotless. And while I knew from some reviews that reading PDFs on this one won't be that practical. But compare to my old kindle, this works fairly well. Some lags on zooming pictures and diagrams, I can still read them. Works best with mostly texts PDFs. The screen is sure small, but since I can zoom or go into landscape mode, I don't have much problems with that.
This is an international version with no ads.
Plus points, I ordered this on Monday and got it on Saturday of the same week which is way much earlier than expected. Very fast for shipping from US to Thailand.
I got the microusb charger cable in the box and I understand that there's no adapter included. I don't mind it that much because I still got the old kindle charger amd I also can charge this with my powerbank, notebook, and mobilephone charger.
Read more
105 people found this helpful
Helpful
Comment Report abuse

Daniel
5.0 out of 5 stars amazing device, but then so are the last two iterations
Reviewed in the United States on December 17, 2018
Verified Purchase
Nothing to complain about it. I bought it to replace an aging Paperwhite from two generation ago (the second Paperwhite) which started to reboot randomly lately. I was expecting a bigger difference in the screen and light, but they are pretty similar. Of course, there's a new flush design, waterproof and with bluetooth, but the basic reading experience is very similar.
Read more
64 people found this helpful
Helpful
Comment Report abuse
See all reviews