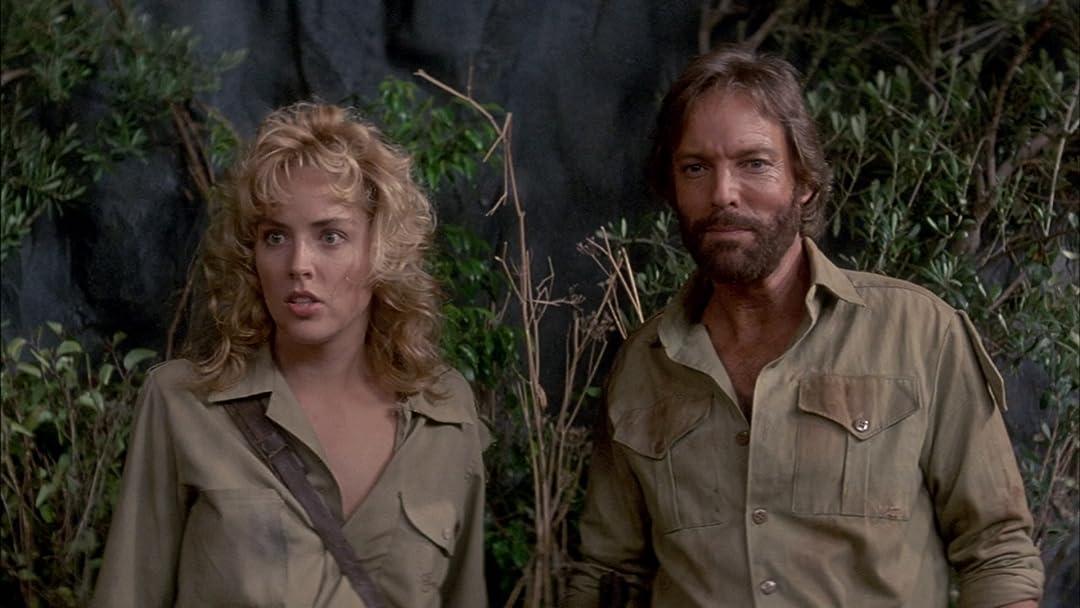 (527)
4.51 h 39 min1987PG
A mysterious murder leads a professor and his daughter to seek Allan Quatermain's help while on a journey to King Solomon's mines and a hidden city made of gold.

Paul S. PersonReviewed in the United States on April 11, 2021
4.0 out of 5 stars
Captures Haggard -- No, Really!
Verified purchase
I agree that this film has its problems. It thinks it is an Indiana Jones film, for one thing.
But it does capture the flow of an HR Haggard African adventure novel:
the hero is enticed into making the journey
the goal is an undiscovered tribe
the tribe is either said to be white, or to live in buildings built by whites, or to have white ancestry
they get there, but getting back out is clearly going to be difficult
the person-in-charge is not very nice to them
violence and excitement ensue
Quatermain and friends prevail
This film also subdues the implicit racism prevalent at the time the novel was written. When the walled town is reached, we are /not/ assured that only white men could have built such a thing; the population is thoroughly integrated; there is no assertion that only women with some white ancestry can be beautiful.
This leaves a nice, rousing adventure story. Which, BTW, include Umslopogas -- and his Axe, which is truly impressive.

A TReviewed in the United States on July 16, 2020
1.0 out of 5 stars
Almost unwatchable
Verified purchase
If you are micro aggressed by political incorrectness or cultural appropriation,,,,, then don't watch. If bad acting along with bad script writing and cheesy special effects aren't your thing,,, then don't watch. Honestly, if I hadn't paid a couple of bucks for it I wouldn't have watched to the end and still question my sanity on why I did. James Earl Jones must cringe when this movie is mentioned and rue the day he agreed to be in it. This is barely fit to run as a Saturday morning B flick, the kind that used be on channel 4 every weekend in the early 1960's
One person found this helpful

Elizabeth DelisiReviewed in the United States on December 8, 2020
5.0 out of 5 stars
Adventure / comedy is fun for all
Verified purchase
Another fun adventure movie starring Richard Chamberlain as Alan Quartermaine. Chamberlain gets a lot of fun out of his role, acting as the adventurer who runs into more laughs than anything. Fun movie, worth watching.
3 people found this helpful

Cassandra CraigReviewed in the United States on February 21, 2018
2.0 out of 5 stars
James Earl Jones
Verified purchase
I thought this was the first Quartmain movie. I was wrong. And sad. But James Earl Jones is in this. I think he had an axe. That's pretty bad a**.. not as bad a** as a light sabre, or turning into a snake or being the king of Zumunda.... But it's still pretty cool.

I'll give it two stars for the James Earl Jones factor alone.
6 people found this helpful

Banana ManReviewed in the United States on November 15, 2022
3.0 out of 5 stars
Recommend passing on it
Verified purchase
Sadly not as good as the first one.

PatReviewed in the United States on January 11, 2021
5.0 out of 5 stars
Movie
Verified purchase
It is a great movie especially since it has Richard Chamberlain who is my idol that’s why I like the movie and all the other movies he has
2 people found this helpful

DanMReviewed in the United States on March 19, 2016
2.0 out of 5 stars
Dumber than I expected, but not (quite) useless ...
Verified purchase
I have to admit I expected better, with Chamberlain, Stone, and Jones. Especially James Earl Jones' character is a disappointment given what a strong actor he is, and already was by then. It must have pained a guy so smart and able to play such a stack of racist stereotypes as they put on his character. Sharon Stone was young then and it occurs to me most of the stuff I've liked with her comes later, but she really isn't cut out to be the kind of female character that screams and runs to the arms of the leading man. Her charcter isn't a complete wallflower in this film, but her later films where she shows more independence and strength are not foreshadowed in this.

The story, meanwhile, just makes no sense on so many levels. Even with the suspense of disbelief that any movie like this requires (I love the Indiana Jones franchise--well, all but ToD), too many pieces of it don't work as magic or ancient technology or modern stuff looking like magic to the locals. They just don't work, period.

Some good scenery, as the location shots were done in Zimbabwe which is a beautiful place. But not quite worth the ridiculous story, I'm afraid. Even as a lightweight action film for a Saturday, it doesn't cut it.

Dr. BReviewed in the United States on February 26, 2022
1.0 out of 5 stars
Would give less stars if could
Verified purchase
If you want to watch the worse movie ever ...this is it.
See all reviews
Back to top
Get to Know Us
Make Money with Us
Amazon Payment Products
Let Us Help You
EnglishChoose a language for shopping. United StatesChoose a country/region for shopping.
© 1996-2022, Amazon.com, Inc. or its affiliates