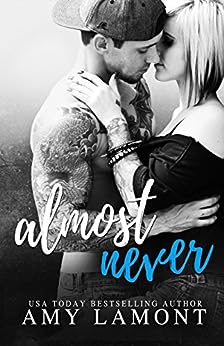 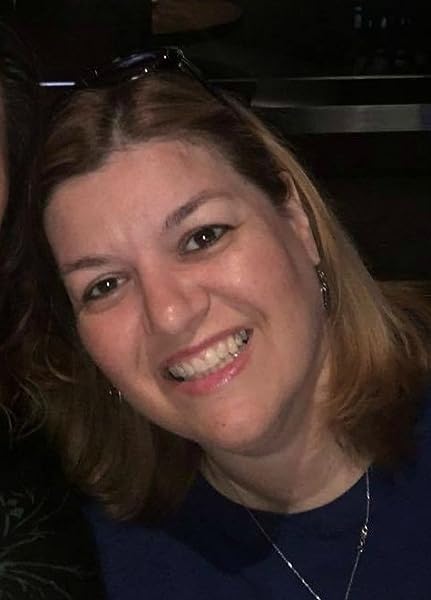 4.0 out of 5 stars
4 out of 5
116 global ratings
How are ratings calculated?
To calculate the overall star rating and percentage breakdown by star, we don’t use a simple average. Instead, our system considers things like how recent a review is and if the reviewer bought the item on Amazon. It also analyzes reviews to verify trustworthiness.
Top reviews

RIC
1.0 out of 5 stars Does anyone speak w/out using the “F” word in every sentence?
Reviewed in the United States on February 18, 2019
Verified Purchase
I read quite a while but F words just kept coming. Maybe Amazon should put a warning so people could not waste time trying to read them.
Read more
10 people found this helpful
Helpful
Comment Report abuse

chrissycf
3.0 out of 5 stars Typical New Adult Read
Reviewed in the United States on July 21, 2019
Verified Purchase
Almost Never is your typical new-adult book, but with a little too much drama. Now don't get me wrong, I love drama in books, but Harper and Declan seemed to have a misunderstanding almost daily and it became kind of annoying by the end of this book.Harper and Declan met their first year of college, but due to a rumor and a misunderstanding, things quickly went sideways between these two, and while Declan lived it up for his college years, Harper became a recluse of sorts only really bonding with her roommate and best friend Jaime and focusing on work and school. When Harper ends up needing Declan's help, these two end up in each others lives again, and things get interesting. Declan apparently hasn't been able to get Harper out of his head for the pat two years, but hasn't been able to approach her. This kind of annoyed me about him. He was the big man on campus, he knew he was in the wrong, yet he couldn't for two years approach Harper and make things right? It had to be her to go to him to try to help him and her before he could talk to her again? Harper having many, many trust issues due to her past, seems to say she wants to trust Declan but then every single time they spend time together she ends up upset and running away from him, and then getting made at Jaime for her calling her out on it. It was an interesting plot at first but then got annoying as it continued to happen.Now don't get me wrong, I did like Harper and Declan's story, I just wished it could have been done without all the drama and craziness that ensued and there were a few holes in the story that I felt needed to be filled up before this book truly finished. I felt like the ending was a bit rushed and other parts were drug on for a bit longer then they should have been. This was an OK book in my opinion, it had it's really great parts, and then there were parts that just fell flat. I wasn't able to really connect with either character and I was really looking forward to when Harper's best friend Jaime would come back into the story since she seemed to be the only one with her head on straight most of the time.
Read more
3 people found this helpful
Helpful
Comment Report abuse

PamD
4.0 out of 5 stars Great story!
Reviewed in the United States on August 29, 2018
Verified Purchase
Harper was a freshman in college when a misunderstanding & vicious false rumors kept Declan from getting to know her. Now, she’s a junior & he’s managed to get back in her circle again. Her money hungry aunt has raised her after her parents both died & Harper has had to work hard for everything she has. Declan’s dad is a famous musician & Declan doesn’t want for anything. He’s trying to make sure he stays out of the public’s eye.

How do I describe this story? Both Harper & Declan needed to grow up but in different ways. Harper needed to stop running away & stand up for herself! Declan needed to stop letting his fear of his dad’s fame dictate his actions. Every fight, altercation, and interaction illustrated the growth of their characters. I love Jamie’s character! Such snark, wit, sarcasm! Behind it all was genuine affection & support for her friend. Well written story!
Read more
2 people found this helpful
Helpful
Comment Report abuse

Ann
5.0 out of 5 stars Excellent story, love it!!
Reviewed in the United States on October 27, 2018
Verified Purchase
This really exceeded all of my expectations. These college kids have the most realistic, adult situations to deal with while trying to squeeze a bit of enjoyment out of the college life. They are total opposites, he has it all, it appears, and it appears that she has lost it all. Though Harper does have some self-worth issues, she remembers when things were different and it is her driving force. As their house of cards crashes down and secrets are revealed, she blossoms on the inside into the beautiful person she already is on the outside. Declan has never had money issues but he has his own issues and struggles with being who he is expected to be versus going with his heart. When it comes to Harper, it is obvious that they are soulmates, he completes her and she keeps him in check, they are really very mature for their age and I really love how he is so patient with her and how he prefers they can talk through everything instead of the flight method that Harper has always relied on. Their story has its share of drama that will engage the emotions in good ways and some not so good ways but through it all they are a formidable team and I thoroughly enjoyed my time in their world.
Read more
Helpful
Comment Report abuse

dmcl
VINE VOICE
4.0 out of 5 stars Triumph over misconceptions and betrayal tied up with a bow made of romance
Reviewed in the United States on October 28, 2018
Verified Purchase
I enjoyed this story of Declan and Harper as they struggle to overcome others misconceptions about them and come to discover that they are loved and lovable. There is a lot of drama between the first and last pages - betrayal, jealousy, anger, disappointment, but there is also love, romance, passion, trust, friendship and justice. In the end, will Declan and Harper find the happiness and fulfillment they so richly deserve? Read on and see how this well-written story ends. Recommended to every lover of romance.
Read more
One person found this helpful
Helpful
Comment Report abuse

Mary A Browne
5.0 out of 5 stars Great book
Reviewed in the United States on October 19, 2019
Verified Purchase
Harper had it rough after her father died and she went to live with her Aunt Rose. Her aunt kept her under her thumb for years by making her feel worthless. She gets to college,trying too get away from her Aunt but it doesn't quite work the way she hoped. Then she meets Declan, the man of her dreams and it gets ruined by a spiteful wench. They get together after a couple of years, go through all the ups and downs couples face and finally get their HEA.
Read more
Helpful
Comment Report abuse

GAYLE
4.0 out of 5 stars Satisfied
Reviewed in the United States on October 26, 2018
Verified Purchase
I struggled with the story but my headline is accurate. Satisfied It's a good read once you get into the meat of the story and the struggles Harper goes through. It look 3/4 of the book to realized that I had read some of this before. i kept saying I know the story already. When I reached the end I realized that Amy had written some of this before but never finished. I'm glad she did and it was good. Really delightful and probably would have finished sooner if I hadn't thought I already new what was happening.
Read more
Helpful
Comment Report abuse

Des
4.0 out of 5 stars Good quick read
Reviewed in the United States on October 4, 2019
Verified Purchase
I enjoyed reading Declan and Harper’s story and overall enjoyed the book. However there were a few times where better proof readers were needed and that kind of detracted from the overall enjoyment. In the end though I was left wanting more of these characters and would love to know what happened with a few supporting characters so I would recommend this to somebody wanting a sweet, quick read.
Read more
Helpful
Comment Report abuse
See all reviews

Kindle Customer
4.0 out of 5 stars Almost Never
Reviewed in the United Kingdom on October 22, 2020
Verified Purchase
The story had shown us how true in life one could easily get what one's want if you are rich and famous. Otherwise you have to work your gut off. Good friend could help to ease your pain and looked out for you. Good read.
Read more
Report abuse

Jenny Ramm
5.0 out of 5 stars Great read. Highly recommended
Reviewed in the United Kingdom on October 28, 2019
Verified Purchase
A great love story with some awesome sex scenes. Could really get into the characters and enjoyed every page of this book. Looking forward to reading more from this author.
Read more
Report abuse

dsanders
4.0 out of 5 stars Delightful read
Reviewed in Canada on October 18, 2019
Verified Purchase
I really enjoyed this story. It was fun reading the rollercoaster ride of Harper and Declan’s budding relationship. I truly enjoyable story that’s worth the read.
Read more
Report abuse