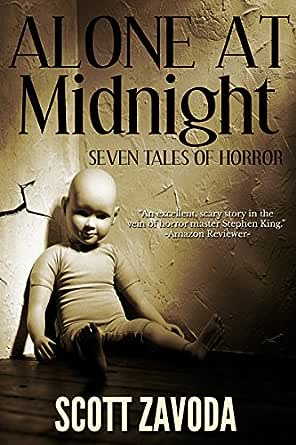 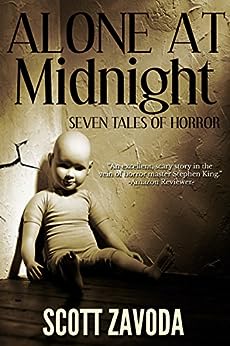 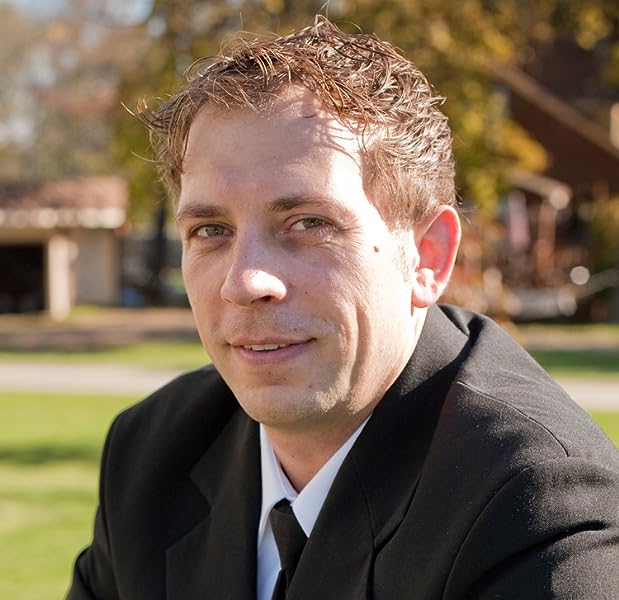 "A good writer Mr. Zavoda.
I'm a shortsjunkie. These are the best I've read in quite a long time. You havetrue talent to be able to pull out the frightening bits of normaleveryday existence that lurk in the recesses of mind , wrap them ingossamer webbing, mist, hallucinations, to come up with someunpredictable endings I Like that. I'm so tired of reading the sameendings regurgitated by writers with no imagination at all, deludingthemselves that they've got an original
Yours is, in my humble opinion, a great work in this genre. I get the feeling you really enjoyed writing it."
-Amazon Reviewer-

Five years of my life are spanned in Alone at Midnight. Each story was written at a different time and I can almost trace where I've been, what I've learned, and what my mindset was about. I think you will, too. The decision to put an "Afterword" after each story was a great one, as it lets you see where I was during that time.

You will find that these are more than horror stories. Much more. A certain theme or mood lies in each one, a living thing in itself.

3.7 out of 5 stars
3.7 out of 5
24 global ratings
How are ratings calculated?
To calculate the overall star rating and percentage breakdown by star, we don’t use a simple average. Instead, our system considers things like how recent a review is and if the reviewer bought the item on Amazon. It also analyzes reviews to verify trustworthiness.
Top reviews

Mark Lukens - author of Ancient Enemy
5.0 out of 5 stars Very original stories!!
Reviewed in the United States on November 17, 2014
Verified Purchase
I read the first ten percent of this short story collection on Amazon as a sample, and then I had to buy it so I could find out what happened in the first story "Oh Christmas Tree."

This collection is made up of seven stories, but four of them are pretty long, and three are very short. I have to admit I didn't care too much for the shorter stories and I wish the author had either developed them more or added one or two longer stories. They weren't terrible, just not nearly as good as the other four stories.

And that's the good news, because those four stories are awesome, and well worth purchasing this collection. Once I started reading any of them, I couldn't put them down. They are original and not the usual vampire/zombie/ghost stories. I have to say that Scott is a very good writer, has an excellent way with words, and I felt like I was really there in the stories. The characters felt like real people to me. Hard to say which one of the four are my favorites. I got hooked with "Oh Christmas Tree," but I think "Bobby" might have been my favorite with "Fright Flight" and "Beneath the Sand" very close seconds.

I also read the sample at the end of the book called "Graveyard Ride" and I'm already hooked. I will definitely buy that one when it comes out. Scott is such a good writer that I hope he writes a novel soon. And I loved the comments Scott makes after each of the stories.

Keep up the great work, Scott!

Pegasus
5.0 out of 5 stars Wonderfully fresh
Reviewed in the United States on January 11, 2015
Verified Purchase
A good writer Mr. Zavoda.
I'm a shorts junkie. These are the best I've read in quite a long time. You have true talent to be able to pull out the frightening bits of normal everyday existence that lurk in the recesses of mind , wrap them in gossamer webbing, mist, hallucinations, to come up with some unpredictable endings I Like that. I'm so tired of reading the same endings regurgitated by writers with no imagination at all, deluding themselves that they've got an original
Yours is, in my humble opinion, a great work in this genre. I get the feeling you really enjoyed writing it.
Read more
Helpful
Comment Report abuse

Sebastien LaQroix
4.0 out of 5 stars More like 3 1/2 stars.... reads like Stephen King (both a positive and a negative)
Reviewed in the United States on January 28, 2015
Verified Purchase
I'm not sure how to review this collection of "horror" stories.

On one hand, we have an extremely proficient writer who creates very compelling characters. The story "Beneath the Sand" is probably the best example of this. I know nothing of Scott Zavoda and wondered many times throughout this story whether he was a Vietnam War vet himself. The character just rings true. Fantastic character construction on Zavoda's part. I will go so far as to compare him to Stephen King. Zavoda's writing proficiency and ability to get inside his characters heads, lives and experiences amazes me and reminded me much of Stephen King's writing. Second, the stories aren't bad... in fact, they are good, really good and kept me turning pages. His writing really shines in the longer pieces, "Beneath the Sand", "Bobby", "O Christmas Tree" and "Fright Flight. The shorter pieces still show off Zavoda's excellent writing and glimpses of real characters. Unfortunately, their short length prohibit the characterization shown in the longer pieces.

In spite of all this praise, there are a few things that prevent me from really recommending this collection to everyone. Though I compared Zavoda to Stephen King and see a lot of similarities, this is also a negative for me. I don't like Stephen King. I find his stories to be all character and no story. His idea of a good story is throwing a bunch of characters together and seeing what happens. Good stories need good characters and good plot. King excels in one and not the other. Many of these criticisms apply to Zavoda as well. His characters are magnificent and for the most part, the stories lack plot. As a result, the stories aren't very scare... I would hesitate to even call them horror. Maybe dark stories? But definitely not horror. It's funny because these criticisms I have of Zavoda are nearly identical to the reasons I don't like King.

That's the dilemma I have. Zavoda's writing is fantastic and the stories are intriguing but ultimately, they aren't scary or even creepy. The only possible exception to this would be Beneath the Sand. That is the only story that feels like horror. I would really not like to give Zavoda a bad review for something that is really personal taste. As a result, I recommend these stories to anyone who likes Stephen King. If you don't, I would advise you to look elsewhere.
Read more
Helpful
Comment Report abuse

HB-Runner
1.0 out of 5 stars Not as advertised
Reviewed in the United States on December 4, 2014
Verified Purchase
I wish I could give this a negative rating. These "horror" stories aren't even horror stories. It's more like a macabre humor
Read more
Helpful
Comment Report abuse
See all reviews