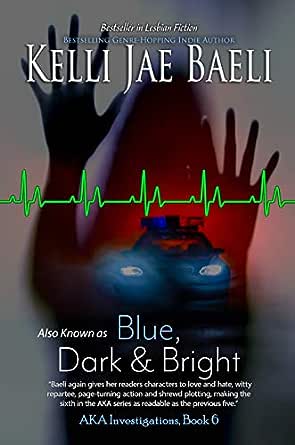 You've subscribed to AKA Investigations Series! We will preorder your items within 24 hours of when they become available. When new books are released, we'll charge your default payment method for the lowest price available during the pre-order period.
Update your device or payment method, cancel individual pre-orders or your subscription at
Your Memberships & Subscriptions
There was an error. We were unable to process your subscription due to an error. Please refresh and try again. 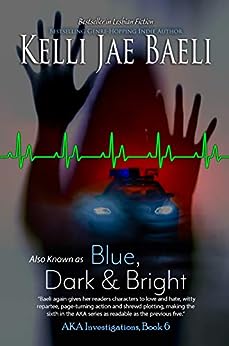 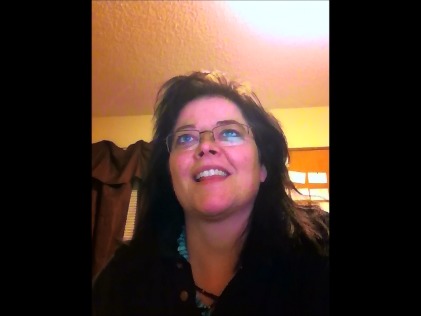 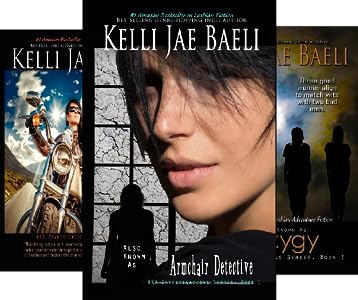 Even after 60 books, Kelli Jae Baeli always tries to write the sort ofbook she would want to read. She says her favorite thing to do is take a common trope and turn it on its ear. Where you expect a zig, she givesyou a zag. In her pages, you will find strong female characters, ethical dilemmas, realistic romantic storylines often filled with adventure and intense pacing, tempered by witty dialogue, and happy endings. All arehallmarks of her work.

As a Bestselling Genre-Hopping IndieAuthor, Baeli enjoys a sales position in the top 5% of lesbian writers,but writes mainstream fiction as well. She has authored 31 FemFicbestsellers in the genres of women's adventure, romance, sciencefiction, speculative fiction, mystery, suspense, humor, and mostrecently, Post-Apocalyptic/Dystopian. Baeli is also an artist andsinger-songwriter. She lives with her wife, Melissa, a budding author in her own right, 2 dogs and 3 cats, and they are currently planning arelocation to the Northwoods to create their homestead.
Visit the author at kellijaebaeli.com
--This text refers to the paperback edition.

Deanne Kearns
5.0 out of 5 stars Kelli Stretches Her Characters in a Wonderful New Novel in the AKA series
Reviewed in the United States on July 2, 2015
Verified Purchase
Kelli Jae Baeli has taken us back to our old friends, Jobeth, Phoebe, Ginger and Izzy and their friends. Kelli's still got her groove on, and this novel in the AKA series has all the elements we have come to expect from a KJB story. Great story line, characters that reach out and grab your heart, bad guys with depth, new characters that quickly become more than stage props.
This story line really branched out into new territory. Dramatic and playful at the same time, Kelli took her characters to another level, giving them challenges that changes their lives. I've been living in anticipation for Blue, Dark & Bright, and it did not disappoint. Kudos, Kelli, to another wonderful and wacky story.
Read more
One person found this helpful
Helpful
Comment Report abuse

Cathie W
5.0 out of 5 stars Change wears the color blue and is bright in AKA6
Reviewed in the United States on June 28, 2015
Verified Purchase
The AKA crew is back after a long hiatus and it's good to hear from some favorite characters. Phoebe and Jobeth along with Izzy and Ginger are stronger than ever and it's a good thing because change is unexpectedly thrust upon them in good ways and not so good ways. In fact, that David Bowie song, cha-cha-cha-changes seems to be the dominant theme of this part of their journey. We meet some new characters that will change them all forever and some old friends join along for this part in the story. The challenges these strong women face force them to circle the wagons and band together for safety in numbers. The ending hinted at more to come which is fine by me. How could you not rally around these excellent women.
Read more
One person found this helpful
Helpful
Comment Report abuse

R
5.0 out of 5 stars Another Excellent Novel
Reviewed in the United States on December 26, 2015
Verified Purchase
Another great novel in the AKA series. There are the familiar characters as well as new ones introduced in this series. The interactions among the characters are so well developed that they stay with you long after the story concludes. When life takes an unfortunate detour for a major character, her friends step up lend their support, love, and strength. This story, regardless if you are gay or straight, demonstrates that when unfortunate events happen, there are always other paths that can be taken if one is willing to take chances. This book, like so many others by this author, is very well written. I highly recommend books by Ms. Baeli.
Read more
One person found this helpful
Helpful
Comment Report abuse

susan
5.0 out of 5 stars 😢
Reviewed in the United States on May 23, 2019
Verified Purchase
I can't believe I read this book in 9 hours. I loved seeing all the girls together. This is a great story, I felt like I was in the middle of the action. The characters were well-written and the plot was interesting. I highly recommend this book.
Read more
Helpful
Comment Report abuse

Programming Kat
5.0 out of 5 stars A good 6th book in a wonderful series
Reviewed in the United States on April 12, 2016
Verified Purchase
I truly enjoyed Ms. Baeli's AKA Investigation series, I couldn't put them down and still wanted more after this 6th book. The series goes from graphic violence against women to it Universal Justice. The characters are well-rounded and the story-lines are engaging. I found myself laughing out loud to weeping quietly. These were a great find.
Read more
One person found this helpful
Helpful
Comment Report abuse

Fiona
2.0 out of 5 stars For true fans only
Reviewed in the United States on August 8, 2015
Verified Purchase
As a huge fan of this series, this book underwhelmed me. The plot line was completely unbelievable & the book focussed on 2 new characters, leaving the usual main characters as bit players. When there was dialogue between JoBeth & Phoebe, it felt rushed,
Once again Phoebe came to everyones rescue, although I wish she had something to contribute other than her money
Read more
Helpful
Comment Report abuse

V Reader
4.0 out of 5 stars Good read, but underwhelming.
Reviewed in the United States on April 23, 2016
I'm a big fan of Ms. Baeli. I've read all the AKA books and this was my least favorite. ***spoilers***. I particularly found the introduction of the Goth twins a bit unnecessary, but I can see they were necessary to help tie up some loose ends. The abrupt move to Eureka Springs felt just that, abrupt. While Phoebe is the source of all things bountiful, her purchase of the new house and the ease at which the gang made their move seemed forced. Sure, they had to get the heck out of Dodge, but establishing roots somewhere with no real investigation of the new location seemed odd. Three stars does not mean "bad" it just means it was an okay read. Nothing will stop me from hoping that there is a book seven as I really want to know what they make of their new home and how Phoebe will resolve her quest for meaning in her life. On a technical note, there were several typos which drive me nuts.
Read more
Helpful
Comment Report abuse
See all reviews

Hope Freed, UK
3.0 out of 5 stars Sorry, but not as good as the first 5....
Reviewed in the United Kingdom on July 1, 2015
Verified Purchase
I’m a huge fan of Jobeth and co (as evidenced by my 5 star review of the 5 book box set… and I’m really stingy with my 5 star reviews!) but I’m afraid that I just didn’t think this was up to the standard of those. The story here was just a bit too ‘busy’ without the focus the author achieved in the previous 5 books. This covers goth-girl double kidnapping, police corruption, another long lost relative turning up and a very sudden mass-lesbian move across country. It still had really enjoyable moments but, as a whole, I just didn’t feel it hung together as well as the author’s previous books in this series (and there was much less hot sex too!).
And come on Kelli Jae Baeli. Did you think your fans wouldn’t notice that the beginning of Nola and Sonya’s story was a direct lift from the previously published short story “Snatched” (in The Speed of Dark collection), only the names were changed? That’s just cheating!
Read more
Report abuse
See all reviews