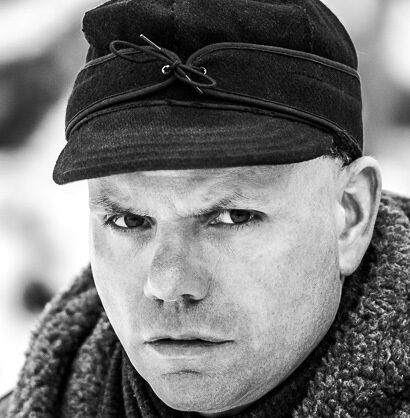 "...tight, sparse military SF that readers familiar with the conventions of the genre will find compelling, entertaining, and quickly paced..." -- Cat Rambo, Science Fiction and Fantasy Writers of America president, writing for The Green Man Review

"...drops you into a world of werecats, full of deception and intrigue." -- Katherine @kleffnotes , The Nerdy Girl Express co-founder

Laura
4.0 out of 5 stars action-packed
Reviewed in the United States on July 4, 2019
Verified Purchase
Always Gray in Winter is a book for readers who like a lot of action.
It’s basically the prose version of a graphic novel, if that makes any sense. The cover is very representative of the interior: comic book characters interact, fight, and fight some more. It would made a great movie.
The plot is convoluted—in fact, I found it hard to follow. The reader is thrown into the milieu and action right from the first page and has to derive an understand of setting, cultural norms, even jargon. I like that kind of sink-or-swim beginning, I guess because I like figuring things out. The world-building is very thorough.
The writing is functional, as descriptive as it needs to be, and flows well. I found the ALL CAPS a bit distracting, but mostly I was too busy going with the flow to notice the prose itself much. Which can be taken as a sign of solid writing: the writing is subliminated to the story-telling.
I think people who like action and like stories with supernatural beings would like this book.
Read more
One person found this helpful
Helpful
Report abuse

L. Miles
4.0 out of 5 stars Action-Packed Werecat Saga
Reviewed in the United States on October 15, 2017
Verified Purchase
"Always Gray in Winter" is the first novel published by Mark J. Engels and is nicely set up at the end for a sequel. It is a fantasy/sci-fi about a family of "werecats" who transform from human to cat and back. They are in a battle to gain control of a "Morphogenetic Synthesizer" that will ultimately provide them with some control over their "affliction." The story's lead is a young female werecat named Pawlina.

The strength of the book is in its action sequences and those sequences are well-written. I also appreciated the romance that Pawlina finds herself in and very much connected to her character and situation. I think the touchy-feely things -- the personal relationships, the feeling of transitioning between cat and human -- balanced out the action sequences nicely.

There were several locations and landmarks in the Midwest that were mentioned. As a Midwesterner, I thoroughly enjoyed that. I also, coincidentally, am trying to learn Polish and that country and its language comes heavily into play in this book. That was a bonus.

One piece of advice for the reader. Make sure you get the main characters and their family relationships straight at the very beginning before moving on. You need to understand who is parent/grandparent to whom. Write the names down and where they fit in the family. You really need to know that to enjoy the book.

One piece of advice for the author. Put in chapter subheadings with location/year at the beginning of each chapter and at the beginning of flashbacks. (Ex. Poznan, Poland, 1992) This will be helpful to the reader to understand where and when that piece of the book is happening. The characters in this book move around quite a bit. A subheading as a reference point is really all you need to keep everyone following along successfully.
Read more
3 people found this helpful
Helpful
Report abuse

Zarpaulus
4.0 out of 5 stars While it is a good story the cast of characters is quite extensive and ...
Reviewed in the United States on August 28, 2017
Verified Purchase
Mark Engel's debut novel brings us the story of the aptly-named Pawlina Katczynski, a were-lynx in hiding from both her family and her former unit in the Navy after a disastrous encounter. While slaking her bloodthirst on some human traffickers she's found and captured by her twin brother, who drags her back into some family business involving a relative in Poland who's being targeted by the same North Korean were-tigers who decimated her unit.

While it is a good story the cast of characters is quite extensive and many of them are referred to by several different names, making it difficult at times to keep track of who's who and who's related to whom. The story also relies heavily on a series of flashbacks that appear with little to no warning, which can confuse an inattentive reader.

Despite its' faults, I look forward to seeing Engels' next book. Always Gray in Winter has hooked me into this series and I intend to find out where it is going.
Read more
3 people found this helpful
Helpful
Report abuse

Stephen Hunt
3.0 out of 5 stars A clever idea with an anime vibe
Reviewed in the United States on April 20, 2019
Verified Purchase
There's a bit of genius at the heart of Always Gray in Winter. A secret has been simmering under the surface of history - and it's about to bust loose. Pawlina Katcynski is a werecat, from a family line of such beings, and that's bringing her trouble because old rivalries put her squarely in the sights of another clan.

The story erupts from the pages as if it were an anime or manga creation. There are larger than life characters, and everything moves at such pace that the plot becomes a bit of a blur at times. There were moments I wasn't quite sure what was going on or if we'd dropped into a flashback or not as the timeframe wasn't terribly clear but on the book galloped regardless.

We also have quite a large cast that we could have taken a little longer to get to know, pieces of dialogue in broken English (deliberately so, with characters from Polish and Korean backgrounds), and a bit too much military dialogue that assumes the reader knows what it means.

That sounds like I'm being negative, but I'm not, it's more that if you find these things jar you, stick with it because there is a fun ride here.

I really liked the family dynamic at the heart of the story. The werecats are bonded by being outsiders to the rest of the world, they are hunted and subject to experimentation, but despite it all, they function as a family, playing hockey together, griping at one another's annoying habits and being there when needed.

All in all, I liked this - I'm giving it three stars because of the confusing passages, but a fan of anime, of military sci-fi or, indeed, of furries might well add an extra star.
Read more
Helpful
Report abuse
See all reviews

Kindle Consumer
2.0 out of 5 stars The best thing about this book is the cover art
Reviewed in the United Kingdom on November 10, 2020
Verified Purchase
I bought this some years ago, and at this time, I have attempted to read it thrice. Every time I dropped it before I even reached midway into the book. The most recent was during the recent COVID-19 Lockdowns. I had nothing better to do, but I still didn’t want to read this.

An exercise in tedium, the author’s clear enthusiasm for the subjects means the book meanders slowly and aimlessly: It gets so lost in the weeds, the park service is still looking for it. A prior review had the nerve to call it ‘Fast Paced’ – Pacing seems a mere suggestion to the author. Looking at the book, it’s 176 pages long. Never before has such a short book failed to hold my interest.

The most I can remember is the beginning, which is when something actually happens, the following chapters devolve into some vague confusing blur of nothingness and flashbacks. Nothing happens, and no stakes are evident but the author expects you to care about the protagonist, who I only remember as being in the US navy, playing hockey, and of course, being able to transform into a Werecat. She’s utterly unremarkable, fading into the similarly unremarkable cast of side characters.

If I had to list positives: The cover art’s nice, The beginning is kinetic and fun (By this book’s standards), and even if it produces something like this, there’s a purity to someone indulging in an enthusiasm.

Bookangel
4.0 out of 5 stars A fast paced military sci-fi werecat story
Reviewed in the United Kingdom on December 5, 2017
Verified Purchase
Pawlina Katczynski was hiding from her enemies and her friends. As a werecat trying to stay one step ahead, she finds herself begin dragged back into the middle of a war between two rival groups. This rivalry goes back over several years and was responsible for the attack that crippled her brother and killed his fiancee. And now, both sides are trying to get hold of a machine that could tip the balance one way or another.

This military sci-fi werecat crossover suffers a little from trying to cram too many ideas in at the expense of giving the reader clarity as to what is going on. Don’t let the werecat part put you off, this is closer to a military sci-fi story. There are several flashbacks that try to explain the past and the reasons behind the current struggle. Unfortunately, the story cuts around to multiple people and places and never seems truly clear about what is going on for the first half of the book. Past that, it becomes a lot easier to understand what is happening and why. Overall, once it is clear what story it is telling, it's worth sticking with and has a good scope for future tales featuring these characters; where there may be more time to explain.
Read more
One person found this helpful
Report abuse
See all reviews