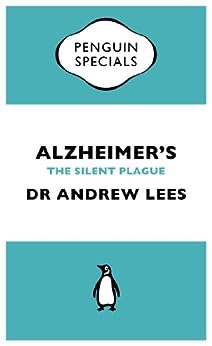 Alzheimer's: An Essential Guide to the Disease and Other Forms of Dementia (Penguin Specials) Kindle Edition

by Andrew Lees (Author) Format: Kindle Edition
See all formats and editions
Sorry, there was a problem loading this page. Try again.

Britain like the rest of the developed world is in the grip of a silent plague. Its thousands of victims can no longer make sense of the world and are contained for their own safety in fading Victorian piles and nondescript redbrick detention centres around the country. For them the present is a foreign country and the past a lost continent.

There are now more people in the UK with Alzheimer's than the population of Liverpool, and four million Americans are reported to have the disease. Longevity is a major factor in the increasing incidence of the disease, with the number of over 65s in the UK having trebled in the last 100 years, and forecast to double again in the next 25 years. With such an alarming background, the race to find the causes - and therefore potentially a cure - for Alzheimer's is urgent.

In this Penguin Special, Dr Andrew Lees, a world expert on the neurodegenerative diseases explains what we know, and don't know, about Alzheimer's and its amelioration.

Dr Andrew Lees is Professor of Neurology at the National Hospital for Neurology and Neurosurgery, London, and Clinical Director of the Queen Square Brain Bank for Neurological Disorders. His major scientific research has been carried out in the field of dementias and Parkinson's disease. A native of St Helens, Lancashire, he lives in north London.

4.0 out of 5 stars
4 out of 5
33 global ratings
How customer reviews and ratings work

6363Sandra
3.0 out of 5 stars Useful but disjointed
Reviewed in the United Kingdom 🇬🇧 on April 23, 2013
Verified Purchase
This is useful, being mainly factual, but my impression is that it is a bit of a 'cut and paste' job from different papers aimed at different audiences, e.g. academic/layman/informed non-specialist reader. Plenty of useful information and good as a reference book that is mostly accessible to the average informed reader.
Read more
2 people found this helpful
Report abuse

Amazon Customer
4.0 out of 5 stars .A broad and well composed introduction.
Reviewed in the United Kingdom 🇬🇧 on May 27, 2019
Verified Purchase
Covers all bases, from the medical-technical to the psychological to the social. Would have been improved by division into chapters, but that’s splitting hairs
Read more
Report abuse

Mr.Frank Special.five stars
5.0 out of 5 stars Yes! a winner.
Reviewed in the United Kingdom 🇬🇧 on April 4, 2013
Verified Purchase
A good read and helps to understand things that go over your head at times.
My wife enjoys all types of books within reason, and this is entertaining as well.
Hope customers will also enjoy and keep reading.
Mrs K.King & R.King.
Read more
Report abuse

Bücherwurm
5.0 out of 5 stars Sad but illuminating
Reviewed in the United Kingdom 🇬🇧 on March 17, 2013
Verified Purchase
This book strikes a good balance between medical information and someone who has a family member with this illness might find helpful. It has some beautifully written passages which I found comforting.
Read more
Report abuse

Mary Gillespie
5.0 out of 5 stars Alzheimer's diseases
Reviewed in the United Kingdom 🇬🇧 on March 3, 2013
Verified Purchase
This was a really interesting book which gave the facts about Alzheimer's syndrome clearly. My mother has this dreadful disease and I have far more understanding about it now.
Read more
3 people found this helpful
Report abuse
See all reviews
Report an issue
Does this item contain inappropriate content?
Report
Do you believe that this item violates a copyright?
Report
Does this item contain quality or formatting issues?
Report