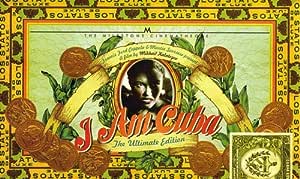 I Am Cuba: The Ultimate Edition

A classic... absolutely astonishing! I AM CUBA is that rarity of rarities, a genuine hidden treasure. It puts to shame anything we're doing today. - --Martin Scorsese

One of the most deliriously beautiful films ever made. - --Manohla Dargis, L.A. Weekly

4.1 out of 5 stars
4.1 out of 5
82 customer ratings
How does Amazon calculate star ratings?
Amazon calculates a product’s star ratings based on a machine learned model instead of a raw data average. The model takes into account factors including the age of a rating, whether the ratings are from verified purchasers, and factors that establish reviewer trustworthiness.
Top Reviews

S. Barth
5.0 out of 5 stars the Spanish voice-over version
Reviewed in the United States on February 21, 2016
Verified Purchase
Not much more anyone need say about this amazing film – one of my all time favorites – except to categorically state that this "cigar-box" package gives you the Spanish voice-over version, not the Russian voice-over of the earlier restoration. Personally, when I first saw this film on disc in 2003 the Russian voice-over felt distracting, from the very first line "I am Cuba" spoken by a frosty Russian voice! The Spanish voice-over of course feels absolutely right, giving a warmer ambiance to the whole experience
For some reason we seem to have two stories of exactly who pulled the film out of obscurity. One says Cuban writer Guillermo Cabrera Infante originally brought the film to Telluride but in this package the booklet does not mention him at all, speaking only of the American film buffs involved, which I would see as the only flaw in this otherwise excellent box set
I Am Cuba: The Ultimate Edition

50HudsonCommodore
5.0 out of 5 stars True artistry
Reviewed in the United States on August 2, 2017
Verified Purchase
I hated this film when I first saw it. It is such a piece of propaganda. But it is a gorgeous piece of propaganda. And after watching it several times I came to appreciate both the style and the stories. This is a compilation of vignettes that tell the story of the Cuban Revolution from the experiences of several very different characters. When I first saw the "ugly American" scenes I dismissed them as grossly overplayed. Then, after my wife worked in the Middle East for 10 years and she told me her experiences with a variety of "ugly Americans", I found that those scenes weren't overplayed at all. There really are jerks like those in the film. When it was first released, Cubans panned it because they felt stereotyped and Russians panned it because it wasn't sufficiently revolutionary. It remained almost unknown until discovered and promoted by Martin Scorsese and then Francis Ford Coppola. This is an amazing example of the filmmaker's art.
Read more
2 people found this helpful
Helpful
Comment Report abuse

Mark Bender
5.0 out of 5 stars A Cultural, Political and History lesson all in one gift box!!!
Reviewed in the United States on June 30, 2014
Verified Purchase
Besides a very satisfactory scan of the original film, "Soy Cuba", the background material contained together in the box and within "The Soviet Mammoth"- the making of "I am Cuba" shot by a Brazilian Documentary team, is probably the BEST purchase I have made from AMAZON all year!!!!

In fact, "I am Cuba" is a Film Student's Must See for its stunning cinematography and its impact on telling the story. There are incredible, noteworthy interviews with participants in the original production, and excellent documentation of how the film was created.

Another reveling theme further describes of what otherwise would have been a crumpling mass of celluloid. It was instead, rescued by determined American Archivists and brought to the world's attention by the likes of Coppola and Scorsese, acclaimed as an outstanding piece of cinema graphic art... This, a formerly rejected and permanently shelved FAILED SOVIET PROPAGANDA FILM.... Imagine my delight to have recently visited characters that are in the documentary during my recent visit to CUBA, which brought the whole experience to life and validated the credibility of the documentary.

If you love artful cinematography, come to life actual historical figures, and are interested in interpretations of the modern history of Cuba and its people's struggle to express themselves through the arts, you will fall in love with this collection....
Read more
6 people found this helpful
Helpful
Comment Report abuse

majeda
5.0 out of 5 stars CINEMA AT ITS FINEST!
Reviewed in the United States on August 25, 2017
Verified Purchase
A director with a unique vision is a rarity, but this man has it. The film is the story of the Cuban revolution and life under Batista. It has few words and doesn't go into great detail, but the ideas come across beautifully. The camera angles and unique black and white palette (I don't want to give too much away) are something quite extraordinary. It's definitely worth the commentary Martin Scorsese gives at the end. Cinema at its finest - THE CAMERA TELLS THE STORY.
Read more
Helpful
Comment Report abuse

John P. Marsh
5.0 out of 5 stars Great Doc on the Making of the Film
Reviewed in the United States on September 6, 2008
Verified Purchase
The doc accompanying the restored film is really terrific. In it, it was great to see contemporary Cuba's reaction to the film and also the participants and how they'd aged. I like the docs a bit more than the film but there is not denying the incredible power of the 'poetic' soviet style on display here. The camerawork, as everyone mentions, is often incredible - simply fantastic. The lighting design is evocative and provocative. What lingers, ultimately, for me, is the least appreciated aspect of the film: the story. Seeing 'Americans' depicted thru a soviet prism in a film about the Cuban revolution was quite arresting. While the price for this boxed set is fairly steep, given the somewhat obscure nature of this film (and supporting documentaries,) I'd have to say it's worth it. A unique film and film experience. Whew, I want to see more 'soviet realism' if it's up to these visual standards.
Read more
4 people found this helpful
Helpful
Comment Report abuse

J. Bisping
5.0 out of 5 stars Masterpiece!
Reviewed in the United States on April 19, 2019
Verified Purchase
This is an amazing film on so many levels. Imagine yourself at the height of the Cold War and Moscow finances artistic gold to counter the US stance on Cuba and influence world opinion. The philosophical antithesis of Leni Riefenstahl, haha!
Read more
Helpful
Comment Report abuse

North Country Coco
5.0 out of 5 stars Incredible Film
Reviewed in the United States on January 11, 2016
Verified Purchase
Wow...one of the most amazing movies EVER! If you love cinematography, you MUST see this film - it is mesmerizing! Packaged in an appropriate "cigar box" with lots of extras.
Read more
2 people found this helpful
Helpful
Comment Report abuse
See all reviews from the United States

See all reviews from the United States
Pages with related products. See and discover other items: cuba music, pbs music