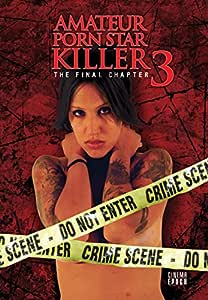 3.2 out of 5 stars
3.2 out of 5
6 customer ratings
How does Amazon calculate star ratings?
Amazon calculates a product’s star ratings based on a machine learned model instead of a raw data average. The model takes into account factors including the age of a rating, whether the ratings are from verified purchasers, and factors that establish reviewer trustworthiness.
Top reviews

4-Legged Defender
3.0 out of 5 stars Justifiable Homicide???
Reviewed in the United States on June 21, 2010
Verified Purchase
In the final installment of this series (there was to be a fourth, in 3-D no less, 'wonder what happened?), Shane Ryan shows he has no more tricks left up his sleeve, as this entry has too much down time and an abundance of repetitive scenes, leaving us without the shock-value of the first two. My personal fave was the second, as it improved on the concept of the first film and pushed the boundaries farther out. You would think having an actual pornstar involved would up the sleaze quotient plenty, but you're wrong. It's simply more of the same, and it drags like hell in the middle. If you've never seen one, I'd recommend any of the three, as the concept was truely unique, creepy and disturbing - sort of a 'how-to' manual for potential serial killers. Yes, it's that sick. (I ain't sayin' it's right, I'm just sayin'). Where as in the first two flicks I felt bad for the victims, this time the cat and mouse scenario got tedious, and Regan Reese got increasingly more annoying, and at some point I found myself saying, "Just kill her already, would you?". That said, I guess now would be a good time for 'The Final Chapter'.
Read more
One person found this helpful
Helpful
Comment Report abuse

james j.
3.0 out of 5 stars movie
Reviewed in the United States on May 23, 2013
Verified Purchase
movie was great shipping was a little costly there s really nothing to say about this movie if you don t like these kind of movie but if you do it was great
Read more
Helpful
Comment Report abuse