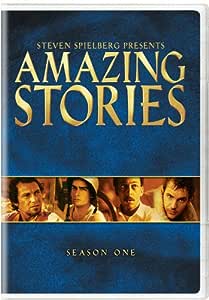 As one experience ends, another adventure begins… in the extraordinary worlds of Amazing Stories! From acclaimed director-producer Steven Spielberg and Amblin Entertainment comes the Primetime Emmy Award-winning TV series. Join a roster of cinema's most illustrious stars, including Kiefer Sutherland, Charlie Sheen, Tim Robbins, John Lithgow, Kevin Costner and more, as well as some of Hollywood's greatest directorial talents, in this epic collection of all 24 groundbreaking Season One episodes. Relive all the mesmerizing magic, mystery and suspense in these unique episodes from some of filmmaking's finest storytellers!

4.7 out of 5 stars
4.7 out of 5
328 customer ratings
How does Amazon calculate star ratings?
Amazon calculates a product’s star ratings based on a machine learned model instead of a raw data average. The model takes into account factors including the age of a rating, whether the ratings are from verified purchasers, and factors that establish reviewer trustworthiness.
Top Reviews

Michael Schilling
5.0 out of 5 stars Have many wonderful memories of watching these episodes as they originally aired
Reviewed in the United States on January 31, 2016
Verified Purchase
A must for Spielberg fans, retro TV fans, or just fans of imaginative stories. Have many wonderful memories of watching these episodes as they originally aired. Have a special place in my heart for "Gather Ye Acorns" with Mark Hamill as a dreamer being urged to follow his own dreams instead of other people's all throughout his life, and "The Doll" with John Lithgow's stellar performance as a lonely guy finding all that he could have bargained for and a lot more at a very unique toy shop in town. If there are any negatives to be had, is that the set is very light on special features except for a smattering of deleted/alternate scenes. Also, the second season of the show is very difficult to find in DVD/Blu-Ray Region 1 format, for whatever reason. Hopefully this situation will be rectified soon.
Read more
18 people found this helpful
Helpful
Comment Report abuse

JD
5.0 out of 5 stars BRILLIANT ALMOST BEYOND DESCRIPTION
Reviewed in the United States on November 9, 2017
Verified Purchase
The "MUMMY DADDY" episode in this fine series is, alone, worth the price of admission. It is hysterically finny and brilliantly clever almost beyond description and the performances are first-rate. It never fails to bring a huge smile to my face and great laughs whenever it comes to mind. it should have won an Oscar or at the very least been nominated. Any viewer who can't appreciate this brilliant marvel is very likely already a mummy and has my sympathy for missing one of the important things in life.
Also worthy of mention is an earlier episode in the series, "THE MAIN ATTRACTION." It too is brilliant and very funny but not quite up to the level of "MUMMY DADDY". Few things are! Miss these at your own peril.
JD

Brandon
1.0 out of 5 stars Serious problem with damaged discs during shipping
Reviewed in the United States on August 20, 2018
Verified Purchase
Ordered this product 3 times, first time 3 discs came loose and were severely scratched. Returned for exchange and received another set with the first disc loose and severely scratched. Kept that order and ordered a third time to hopefully combine two into a good set. Third order, the second disc came loose and since it was behind the first disc, scratched the first disc badly as well. Decided to return both and give up. The box/envelopes it came in were just fine and the disc set box also looks fine. Not sure if it's an issue in the warehouse or the spindle holders aren't up to the job. Either way, I would seriously avoid this. Better option if this was in a store to go on the shelf and shake all the boxes until one doesn't have a rattling sound.
Read more
3 people found this helpful
Helpful
Comment Report abuse

Psiberman
5.0 out of 5 stars "Amazing Stories", The Great Unsung Treasure of 1985
Reviewed in the United States on October 10, 2019
Verified Purchase
Amazing Stories is an anthology of tales that range from the sublime to the flamboyantly fantastic. The show was created by Steven Spielberg ("E.T.", "Schindler's List", "Raiders of the Lost Ark", etc.). "Amazing Stories" was developed by Mr. Spielberg, along with Joshua Brand, and John Falsey.

These tales offer main characters whom you don't even know you know. Among them are Robert Picardo in "Boo!" (a.k.a. the photonic doctor in "Star Trek: Voyager"), and Sam Waterston in "Mirror, Mirror" (Frankie's husband in the Netflix hit, "Grace and Frankie"). Then there's the remarkable performance by Mark Hamill ("Luke Skywalker") in the episode entitled, "Gather Ye Acorns". Perhaps my all-time favorite (at least in Season 1) is "The Sitter", where a harried mother has difficulties finding someone to watch her two young kids while she works. Mabel King plays the titular role, and one of the two hyperactive children is played by Seth Green, who goes on to play Daniel "Oz" Osbourne (aka the werewolf) in "Buffy the Vampire Slayer".

Whatever your flavor of the fantastic, you're sure to find many of the stories entertaining and provocative. It is an unsung work that is .. well, Amazing.
Read more
One person found this helpful
Helpful
Comment Report abuse

Claudia Estrada
5.0 out of 5 stars Amazing ... stories!
Reviewed in the United States on April 18, 2020
Verified Purchase
From the creative mind of Steven Spielberg comes this series from the mid 80's! This short lived series had both adventure, comedy and misfortune. But what made it so amazing was it could be either good or bad at the end or just inbetween and you were satisfied with each episode outcome. You can also find some familiar faces that were young and fresh later to be big movie stars!

This season had some of the best stories from "The Mission" which I am sure was one of the most expensive episodes of it's day for TV, to "Alamo Joe" and the very funny "Mummy, Daddy." Almost all of these are instant classics and felt like short movies for the small screen. I'm glad it is coming back but on a streaming service which is unfortunate.

Natalie Jenkins
5.0 out of 5 stars 2 favorite episodes!
Reviewed in the United States on June 20, 2018
Verified Purchase
Very excited to see two of my favorite episodes in this season. The Mummy Daddy, has always been a family favorite. We would watch it every Halloween, until our VHS tape broke. Such a funny episode. Another favorite was Hell Toupee. Just a another silly, funny, episode to laugh at. Very happy to have these episodes again. Looking forward to watching the rest.
Read more
3 people found this helpful
Helpful
Comment Report abuse

Christopher M. Styles
5.0 out of 5 stars My favorite fantasy series ever finally on dvd thanks.
Reviewed in the United States on July 2, 2019
Verified Purchase
This is put out by AMBLIN and each episode is unique. From scary to funny to sci fi to drama its all here. Over all its just a great fantasy series that the whole family can enjoy. Just look at who directed and acted in these and you'll know why this is so great . I only hope they continue to put out the other seasons soon.
Read more
One person found this helpful
Helpful
Comment Report abuse
See all reviews from the United States

Mr. R. Tomlinson
4.0 out of 5 stars amazing 'as it was the first time' stories
Reviewed in the United Kingdom on October 9, 2009
Verified Purchase
Watching Amazing Stories as a youngster and now again reminded me of why I like certain genres of films and amazing stories packs them all in from horror, mystery, magical, Indian magic, thriller, WW2, ghost stories, comedy... and just great, no, Amazing Stories.

If, like me, you want to buy for old times sake, it's well worth it with the high quality picture and cracking acting. Or if you want to purchase something 'old school' these stories will get you into a wide range and test your genre of movie type - for the better.

Amazon Customer
4.0 out of 5 stars Spielberg finesse and a host of famous faces,
Reviewed in the United Kingdom on April 4, 2014
Verified Purchase
I bought this solely on the childhood memory of watching 'The Mission' episode.
Watching episodes now with my kids, they go from
'slightly dis-interested to totally drawn in and fascinated in the blink of and eye'.
Read more
Helpful
Sending feedback...
Thank you for your feedback.
Sorry, we failed to record your vote. Please try again
Report abuse

Twilight23
5.0 out of 5 stars Memories
Reviewed in the United Kingdom on August 10, 2014
Verified Purchase
This show brings back a lot of childhood memories for me and at £10 is a complete bargain! I love shows like this and the 80's twilight zone and the episodes are overall very family friendly.
Read more
2 people found this helpful
Helpful
Sending feedback...
Thank you for your feedback.
Sorry, we failed to record your vote. Please try again
Report abuse

mr darren j spencer
5.0 out of 5 stars dvd
Reviewed in the United Kingdom on March 19, 2014
Verified Purchase
The product i have purchased is everything i expected it to be and compliant with the advertisement relating to the goods being sold.
Read more
Helpful
Sending feedback...
Thank you for your feedback.
Sorry, we failed to record your vote. Please try again
Report abuse

Mrs T
4.0 out of 5 stars Four Stars
Reviewed in the United Kingdom on November 18, 2015
Verified Purchase
Enjoyed all the stories. Delivered on time.
Read more
Helpful
Sending feedback...
Thank you for your feedback.
Sorry, we failed to record your vote. Please try again
Report abuse

cindy Williamson
5.0 out of 5 stars Five Stars
Reviewed in the United Kingdom on December 20, 2014
Verified Purchase
Brilliant dvd even my little ones enjoyed watching great for the whole family
Read more
Helpful
Sending feedback...
Thank you for your feedback.
Sorry, we failed to record your vote. Please try again
Report abuse

norman hamilton
5.0 out of 5 stars Amazing Stories
Reviewed in the United Kingdom on June 17, 2013
Verified Purchase
I watch this a couple of years ago and thought it was great.
I seen it on Amazon and bought it, and i loved watching it again.
it was well worth the money.
Read more
One person found this helpful
Helpful
Sending feedback...
Thank you for your feedback.
Sorry, we failed to record your vote. Please try again
Report abuse

joe
5.0 out of 5 stars Five Stars
Reviewed in the United Kingdom on August 3, 2015
Verified Purchase
excellent series when will season 2 be released
Read more
Helpful
Sending feedback...
Thank you for your feedback.
Sorry, we failed to record your vote. Please try again
Report abuse