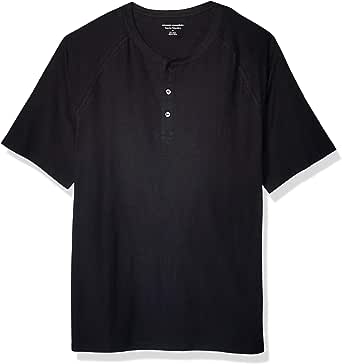 Amazon Essentials is focused on creating affordable, high-quality, and long-lasting everyday clothing you can rely on. Our line of men’s must-haves includes polo shirts, chino pants, classic-fit shorts, casual button-downs, and crew-neck tees. Our consistent sizing takes the guesswork out of shopping, and each piece is put to the test to maintain the highest standards in quality and comfort.

4.3 out of 5 stars
4.3 out of 5
800 global ratings
How are ratings calculated?
To calculate the overall star rating and percentage breakdown by star, we don’t use a simple average. Instead, our system considers things like how recent a review is and if the reviewer bought the item on Amazon. It also analyzes reviews to verify trustworthiness.

Chase G.
2.0 out of 5 stars Very wide cut, fragile buttons
Reviewed in the United States on July 24, 2019
Size: X-LargeColor: RedVerified Purchase
The bottom button fell off within 24 hours of very light wear. Simply buttoning and then unbuttoning it several times was too much for it.

Regarding fit, this is a very wide cut shirt and “regular fit” is perhaps misleading. I am 6’4” and ~215 lbs with athletic build, and the XL has the right length in the torso and arms but is very baggy. This shirt might be more appreciated by someone with more of a stout/heavyset build.

Otherwise the material was light and would be nice for summer.

Tamara A. Millay
2.0 out of 5 stars An inferior shirt, especially at the price
Reviewed in the United States on October 22, 2019
Size: X-LargeColor: Charcoal HeatherVerified Purchase
(Note: This shirt was purchased for my husband and the review is by him).

I bought this shirt as a substitute for a somewhat pricier one (the Lee Men's Short Sleeve Henley Shirt, Amazon item# B07L3N8G6G).

I recently found the Lee shirt on very good sale at a meatspace store, bought one, loved it, came looking on Amazon for more, and saw that the Amazon Essentials Henley was substantially cheaper. So I thought I'd give it a try.

I've never had a problem with Amazon Essentials products before -- they're usually at least as good as the "big name" brands they substitute for -- but this is just flat an inferior product. Not only as compared to the Lee brand Henley, but as compared to any random t-shirt.

The only way I can describe this shirt is that it feels like Amazon bought a pile of cheap t-shirts then had workers cut slits in the front from the collars down and sew buttons in to magically make the t-shirts into "Henley-style" pullovers.

The Lee Henley is not particularly thick/heavy, but it feels substantial. It's soft and comfortable, and seems to air reasonably well even in humid Florida, etc. I wouldn't be embarrassed to wear it in anything short of a "formal" setting. It looks good, it feels good, and I don't worry that it's going to come apart and fall off of me in a shower with a light breeze.

The Amazon "Henley" is thin, cheap-feeling fabric (it says 100% cotton, but I'm guessing maybe 2/3 the cotton fiber used in the cloth of a decent t-shirt of the same size). It's not uncomfortable, but after only one wear and one wash, the "Henley" collar already seems to be coming out of shape.

I've been known to pick up $1 "factory second" t-shirts at the dollar store to wear while doing yard work and such. Holding one of those shirts in one hand and this shirt in the other, the dollar shirt is clearly of superior fabric, has superior stitching, etc.

If I was Amazon, I'd be ashamed to have my company's name on this shirt, let alone demand $10 for it.

I'm giving it two stars instead of one because, well, it IS a shirt and it didn't disintegrate its first time in the washing machine. So I'll probably wear it a few times before cutting it up for rags.
Read more
7 people found this helpful
Helpful
Report abuse

rearview1
5.0 out of 5 stars Great Henley
Reviewed in the United States on August 8, 2019
Size: XX-LargeColor: Light Gray HeatherVerified Purchase
I've bought 6 so far! My husband will only wear henleys and it is so hard to find 100% cotton ones, or ones with a good fit ( since they are all made overseas, they seem geared to tiny people). NOT THESE. They have ample sleeves and length to them. Highly recommended!!
Read more
7 people found this helpful
Helpful
Report abuse

Steve Mont
5.0 out of 5 stars Nice and soft but THICC
Reviewed in the United States on September 13, 2019
Size: X-LargeColor: BlackVerified Purchase
I really enjoy this shirt and will order again. I'm a taller generally large but not overweight build and found the sizing to be slightly large but not in a bad way. It has a casual sort of look on it's own that I like for myself. One thing I'll note is that the material is VERY thick. Its cotton and breathes great and is much softer than most shirts, but I was a little shocked by how physically thick the material is. It almost feels like wool or something, minus the itch. Would reccomend but maybe not if you're looking for something basic and light for the summer or for exercising in. Like I said tho will buy again. The softness is great and general quality is high for the price
Read more
2 people found this helpful
Helpful
Report abuse

Mark
4.0 out of 5 stars It fits... not like my other shirts who betrayed me...
Reviewed in the United States on June 11, 2020
Size: LargeColor: Light Gray HeatherVerified Purchase
What can I say? It's a shirt.

It arrived when I expected it, which was really cool. The delivery person was a total ninja. My dogs never heard a thing. A picture showed up in my email and there were shirts on my doorstep. No doorbell. No frantic barking. It was a good delivery. And just in time because I needed a clean shirt.

Plus, it fits, unlike my other shirts. My other shirts are traitors. Those old shirts are fake news. If they tell you I gained weight recently, don't believe them. Better, don't even talk to them. I'll send them to a clothing drive... once that's safe to do again, of course. Don't tell them because I might need to wear one in a pinch.

I got 2 colors (2 different shirts, not the same shirt... just sayin). I'm only rating one of them. The other can be jealous. But I like the other shirt too because it [still] fits. I know one day this shirt will betray me to like shrink or wear out but, today, it's my favorite shirt. And do you know why? Because it's a color I like and, as I said before, it fits. The fitting part is my favorite though. Oh, and I haven't spilled anything on them yet. That's a plus, right?

So, now I got 2 shirts that fit. If I alternate them no one will know I only have 2 shirts that fit, right? They'll see different colors and know I have more than 1 shirt that fits. Plus, I can go outside again. With a mask, of course, I'm not crazy.

If you like short-sleeve henley-type shirts that fit, this is the shirt for you. Well, you have to pick the right size or it won't fit no matter what you do. Choose a nice color - they have several - and your size (also several). If your old shirts are telling everyone you gained weight during pandemic days, choose the next size up. That'll learn 'em. Better safe than sorry. Order 2 shirts... then you can have 2 shirts that fit too! Just like me!

tom
5.0 out of 5 stars Descent Quality and Very Comfortable
Reviewed in the United States on July 20, 2020
Verified Purchase
I bought this shirt for my husband to wear following shoulder surgery. The henley style was easier for him to slide on when he had limited movement in his shoulder. I thought when I bought it that, because it was so inexpensive, he might wear it a for a few weeks then donate it to charity after he could move his shoulder again. Despite the shoulder moving normally again, I am still seeing this shirt every week. Despite being a very reasonable price, this is decent quality. My husband really likes the cut, weight, style and color. This one will eventually end up in the rag bag because my husband will wear it until it is too worn out to donate to charity.
Read more
Helpful
Report abuse
See all reviews

Angela M.
5.0 out of 5 stars Very comfortable grandad tee-shirt
Reviewed in the United Kingdom on June 8, 2020
Size: MediumColor: Washed RedVerified Purchase
This shirt is very comfortable, I bought a medium, but, will try a small as it is a little too big, but, ok for the summer and to wear with shorts etc. It is a men's shirt, so women who want to buy this item, go for a smaller size than you might normally. Lovely soft cotton, good choice of colours and reasonably priced, so overall, very pleased. The order arrived promptly and when it said it would. Excellent service.
Read more
One person found this helpful
Report abuse

Dr Nicholas P Kingston
5.0 out of 5 stars super comfy, decent quality, but runs largish
Reviewed in the United Kingdom on January 3, 2020
Size: MediumColor: WhiteVerified Purchase
I'm 182cm 5' 11.5" height weight 84kg, slim to muscular build, usually wear a size 15.5 formal shirt
I ordered Medium and its moderately loose (not quite baggy). i could have got away with a small if I wanted something more form fitting, but still excellent value
Would like to see a plain heavy cotton material version as opposed to the slub cotton if anyone in Amazon ever reads these
Read more
Report abuse

Christopher Pettet
5.0 out of 5 stars Fantastic garment
Reviewed in the United Kingdom on November 10, 2019
Size: XX-LargeColor: RedVerified Purchase
Fantastic t-shirt. Very comfortable and "loose" fitting, just what I required! I had to get the regular fit though as the "slim" fit was just a little too tight!
Read more
One person found this helpful
Report abuse

Max
5.0 out of 5 stars Rather nice
Reviewed in the United Kingdom on June 23, 2020
Size: LargeColor: Light BlueVerified Purchase
Fit as expected. Quality seems ok. Washed a few times now with no shrinkage or fading.
Read more
One person found this helpful
Report abuse

PC
5.0 out of 5 stars Cool and comfortable
Reviewed in the United Kingdom on September 2, 2019
Size: MediumColor: RedVerified Purchase
Just what was needed as comfortable and cool pyjama top.
Read more
Report abuse
See all reviews