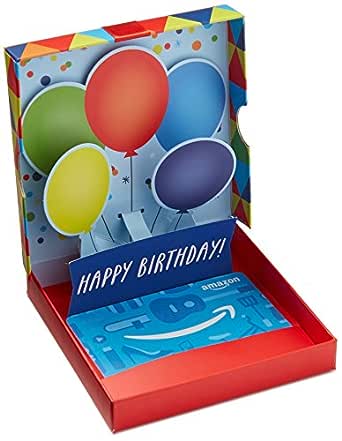 by Amazon
4.8 out of 5 stars 4,586 ratings
| 48 answered questions
In Stock.
Fastest delivery: Tuesday, July 14
Order within 18 hrs and 9 mins Details
Ships from and sold by ACI Gift Cards LLC, an Amazon company.
Amazon.com Gift Cards are subject to our Terms and Conditions . Have an Amazon Gift Card? Redeem it here

High quality products for any occasion

Add a gift card to your cart and check “This is a gift” or select “Add a gift receipt” at checkout to select and edit gift options. The gift message will be printed on a separate physical packing slip and not on the gift card product.

Will the gift amount be printed on the gift card?

Not necessarily, only certain gift cards have the gift amount printed on the gift card.

How do I check the value of a gift card?

To check the purchased value of the gift card(s), simply match the last 4 digits of the serial number on the back of the gift card to those listed on www.amazon.com/yourorders.

Other ways to gift

4.8 out of 5 stars
4.8 out of 5
4,586 customer ratings
How does Amazon calculate star ratings?
Amazon calculates a product’s star ratings based on a machine learned model instead of a raw data average. The model takes into account factors including the age of a rating, whether the ratings are from verified purchasers, and factors that establish reviewer trustworthiness.

T_Anderson
1.0 out of 5 stars NEVER buy an Amazon gift card
Reviewed in the United States on September 8, 2018
Gift Amount: 0Design Name: Birthday Pop-Up BoxVerified Purchase
You get a mystery card with no value, so you think okay well I'll check the balance. Per the BACK OF THE CARD it says go to amazon.com/redeem to check the balance so I do. You enter the card number and nothing. The only button on the page says apply balance so I'm thinking well maybe I can just delete the card from my account after I have to jump through these hoops to even figure out what amount is on the card. NOPE. You have to contact amazon to get it removed and I'm on chat with the guy for over 10 min trying to explain it's a gift and I don't want it on my account before he finally gets what I mean and removes it. Of course now I'm worried the balance is gone and I want to check and make sure it's still good before giving as a gift. But I can't. UGH.

I read a lot of reviews of people saying they had issues and I assumed it was them, not amazon. I would never buy an amazon gift card ever again after this. I'll pay the 5 bucks to get a visa that is literally zero drama. Thank you for nothing, like always, amazon.

Maxi
5.0 out of 5 stars A perfect gift
Reviewed in the United States on November 2, 2017
Gift Amount: 50Design Name: Birthday Pop-Up BoxVerified Purchase
A perfect gift for an Amazon shopper or a perfect way to introduce a non Amazon shopper to the ease and convenience of Amazon shopping. I ordered 2 cards. They came with the gift boxes that I chose. Card had gift amount in the upper left hand corner. I am very happy with my purchase.
Read more
88 people found this helpful
Helpful
Comment Report abuse

Vincent
HALL OF FAMETOP 50 REVIEWERVINE VOICE
5.0 out of 5 stars Layers of suprise
Reviewed in the United States on April 9, 2018
Gift Amount: 0Design Name: Birthday Pop-Up BoxVerified Purchase
Love the design of the pop-up box as it has a lot of layers to it.

Upon opening the receiver is surprised with balloons and a birthday greeting.

The balloon and happy birthday pop-up won't stand on it's own (unless you force it back later on*), but good as a surprise upon initial opening nevertheless

The card it self has a nice design to it also as it's not just a blank background with amazon logo. it has several objects displayed on the card like a bike, shoes, guitar. Doesn't have a happy birthday greeting which makes sense as you don't want to be repetitive with your presentation

Redeeming card is easy. There's a peel of sticker (instead of scratcher), so no need to worry about scratching off the text of the code. If you use the amazon app you can redeem the amount in seconds: click the camera option

Overall, will make an amazing gift for someone's birthday (especially when you don't really know what to get them)
Read more

Fodness
5.0 out of 5 stars Great gift idea!
Reviewed in the United States on November 3, 2017
Gift Amount: 0Design Name: Birthday Pop-Up BoxVerified Purchase
This arrived on the doorstep in TWO DAYS - on a Sunday! Box and pop-up card are adorable. One piece of Scotch tape and it was "wrapped" - easiest gift I ever bought. As some have commented, it doesn't say who it's from (not a problem in this case; however, you might fix that).
Read more
59 people found this helpful
Helpful
Comment Report abuse

Page 1 of 1 Start overPage 1 of 1
This shopping feature will continue to load items when the Enter key is pressed. In order to navigate out of this carousel please use your heading shortcut key to navigate to the next or previous heading.
Back
Next
Pages with related products. See and discover other items: gift certificate cards, gift box, birthday gifts, Paper Gifts, Birthday Gifts, Explore money bags for weddings