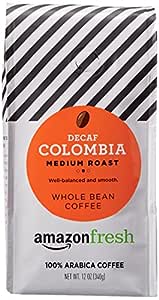 Our AmazonFresh Decaf Colombia medium roast whole bean coffee is made with high quality 100% Arabica beans, expertly roasted and immediately packed for freshness. Full-bodied with a smooth finish, this well balanced cup has a subtle citrus aroma and hints of cocoa and brown sugar. Hello, refill.

4.2 out of 5 stars
4.2 out of 5
1,287 global ratings
How are ratings calculated?
To calculate the overall star rating and percentage breakdown by star, we don’t use a simple average. Instead, our system considers things like how recent a review is and if the reviewer bought the item on Amazon. It also analyzes reviews to verify trustworthiness.

Customer K
1.0 out of 5 stars Not good...
Reviewed in the United States on July 28, 2019
Flavor Name: Medium RoastVerified Purchase
I do not like to leave negative reviews, but this coffee is nasty, nasty & nasty. I know coffee, and this is NOT a medium roast-it is a DARK & OILY BURNT roast. The coffee has a really bad burnt taste to it, and the beans are very oily, which means they were over roasted. I do NOT recommend this coffee at all. Sorry Amazon.
Read more
15 people found this helpful
Helpful
Report abuse

Pasco
5.0 out of 5 stars A good daily cup.
Reviewed in the United States on May 24, 2019
Flavor Name: Rwanda Medium RoastVerified PurchaseEarly Reviewer Rewards(What's this?)
First, a couple notes on how I prepare my coffee. I use a burr grinder and a French press. Four tablespoons of grounds per 12oz water. Water temperature 185F. Brew time 3.5 minutes.

It's just a little better than Caribou Daybreak. An easy to drink medium-light roast that won't break the bank. It doesn't have the fruit heavy cherry flavor that you might get from a more specifically sourced coffee, but it's not bitter and doesn't have a chemical aftertaste. It's an enjoyable daily cup that "gets the job done."
Read more
11 people found this helpful
Helpful
Report abuse

B. Carver
4.0 out of 5 stars Not bad
Reviewed in the United States on April 16, 2019
Flavor Name: Decaf Colombia Medium RoastVerified Purchase
Most decaf is actively bad, this is completely neutral. This isn't a bad purchase but the Don Pablo stuff is better for the same money. I drink low caf mixture every morning and decaf through the day so the 5lb Don Pablo is perfect for me, this Amazon decaf might be better if you drink it once in a while and don't want a giant bag of beans in your cupboard. Still, I'm surprised, this coffee is completely acceptable. Since their decaf is decent, the regular beans are probably pretty good. I like Peet's as far as the grocery store roasters go, Big Bang is nice.
Read more
11 people found this helpful
Helpful
Report abuse

fangleman
1.0 out of 5 stars Tastes not so good. Stale.
Reviewed in the United States on April 4, 2020
Flavor Name: Rwanda Medium RoastVerified Purchase
I ordered 3 different Amazon Basics coffees. Each was a single source coffee. All were whole bean and arrived in a bag. This one the bag was completely compressed, like the bricks of vacuumed packed ground coffee would be. This should not be vacuum packed. The other 2 bags were not so compressed and are more like a bag of fresh coffee.

The next day after receiving this coffee I made myself a pot. Stale. Very stale. I will likely just be throwing it away instead of drinking it. Yes. It's that bad. I'm hoping the other 2 bags from different geographic sources but Amazon brand are not this bad.

I'm generally a *$ whole bean buyer, but that is as much about my convenience as it is about flavor and quality - however, I do find it difficult to match their coffee when I order another brand.
Read more
4 people found this helpful
Helpful
Report abuse

ydant
1.0 out of 5 stars Pitch black oily beans. Not a medium roast. No roast date. Best-by date 7 months away.
Reviewed in the United States on March 23, 2020
Flavor Name: Nicaragua Medium RoastVerified Purchase
This is for the Nicaragua Whole Bean *MEDIUM* roast. Arrived with a best-by date 7 months away, no hint of an actual roast date, and beans so heavily roasted they were pitch black and oily. This is Pete's level of "medium" roast. Might be good for people who like this style of coffee - I can't rate the coffee for what it is, because I don't like this style of roast. Since the product is named "medium roast", I have to rate it based on that, and it fails entirely to deliver what was promised.

Of course, I'm not *surprised* - this is cheaper generic coffee under the Amazon brand during a time of panic buying. I didn't expect great, I just hoped to get the roast level advertised.
Read more
5 people found this helpful
Helpful
Report abuse

I like coffee. I'm not a coffee fuss-pot (I will drink the old stuff in the pot at work). But I do appreciate good coffee, and I try to keep several levels of 'quality' at home, depending on what I'm in the mood for and whether I plan to sit and savour it... or take it out to the garage and get sawdust in it while I work.

I'll also lay out that I'm not a fan of Starbucks, as a rule, because I think they sell a lot of overpriced, over-roasted, mediocre beans. (They do some really nice stuff too, but it's available in VERY limited quantities and markets. The problem with their coffee isn't know-how or understanding, it's marketing and/or market driven). But I digress.

This is advertised as a 'dark' roast. I had hoped, since it was a "single origin" "Fair Trade" "Organic" Sumatra, that it was really going to lean to the medium roast side of dark. It does not. This is cooked just to the point I can tolerate. Lightly burned would be a better description. Oily bean surface. Smells like burned toast. Just - not great.

This is not a coffee that I will outright refuse to drink (or choose to return). It just makes me a little sad to see what were probably fairly high quality, tasty beans - now pretty nearly indistinguishable from any other bean on the planet at this level of roast. The magic has been cooked out of them. Pooh.

They are reasonably fresh - they still foam & outgas when wet down. They are much tastier (to my palate) than the Starbucks French Roast that my office seems to like... (but then that tastes like charred cardboard strained through a burned bagel.) So if you like an heavily-roasted style of coffee, this is probably a pretty good choice for you. It's a high-end burnt roast.

I did find that if I blend it half/half with their "Just Bright, Light Roast" beans, it improves both coffees. So that's what I'm doing.

The price is very reasonable, which is why I took a gamble. I will not buy these again, however. Just really not my thing.

Apparently I can't review the other Light Roast beans separately, so I'll just say here that the "bright" beans are fine. Better than the average grocery store brand. Not over roasted. Nothing special. Just fine. Probably going back to fair trade Tanzanian peaberry from another source.
Read more
2 people found this helpful
Helpful
Report abuse

Michelle Mayer
1.0 out of 5 stars Tasteless
Reviewed in the United States on April 13, 2020
Flavor Name: Donut Cafe, Medium RoastVerified Purchase
I ordered this because I had some at my brother's house, and it was out of this world; it smelled so good while it was brewing and was delicious. I couldn't wait until my package came. I was very disappointed; there was was very little aroma when I opened the bag. The expiration date stamped on the bag was far in the future, so that wasn't the problem. My brother said maybe it was my water or even my coffeemaker, and to bring some over so we could make it at his house. Sounded good, so I did just that. He made a pot from my bag, and agreed that it was pretty much brown hot water. He still orders it, but I won't...I'll drink it as his house.
Read more
2 people found this helpful
Helpful
Report abuse
See all reviews