You've subscribed to The Variant Saga! We will preorder your items within 24 hours of when they become available. When new books are released, we'll charge your default payment method for the lowest price available during the pre-order period.
Update your device or payment method, cancel individual pre-orders or your subscription at
Your Memberships & Subscriptions
There was an error. We were unable to process your subscription due to an error. Please refresh and try again. 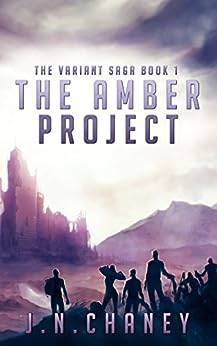 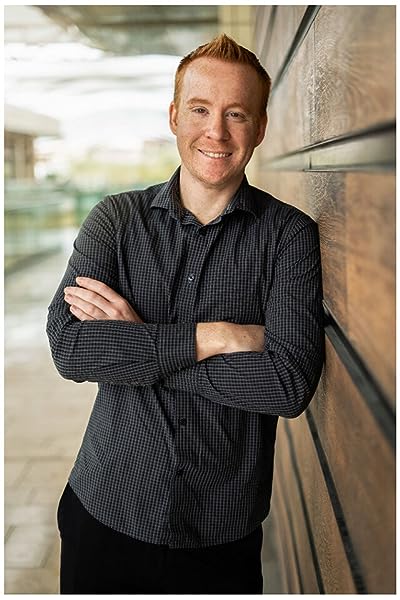 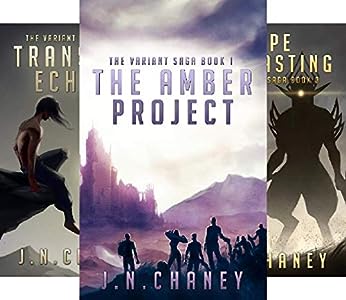 Everything is a grave- The Amber Project continues to captivate fans of dystopian science fiction,combining hard sci-fi, exploration, and gritty action with a healthy dose ofintrigue. Check out what the critics are saying...

★★★★★ "Try this series, you won't be disappointed!" - David Estes, author of the Moon Dwellers

★★★★★ "The Amber Project is dystopian fiction no fan of the genre should miss." - Cris Pasqueralle

★★★★★ "You will find yourself holding your breath and cheering." - Novel Idea Reviews

This book hits hard and keeps your pulse pounding until the very end. A thrilling blend of action, scifi, and mystery, the Variant Saga is an explosive mix that fans of dystopian and Young Adult will absolutely love.
J. N. Chaney can be found at jnchaney.com. You can also join the Facebook group, "JN Chaney's Renegade Readers" for the latest news and discussions.

J. N. Chaney has a Master's of Fine Arts in Creative Writing and fancies himself quite the Super Mario Bros. fan. When he isn't writing or gaming, you can find him online at jnchaney.com. He migrates often, but was last seen in Las Vegas, NV. Any sightings should be reported, as they are rare. --This text refers to the paperback edition.
Read more

4.4 out of 5 stars
4.4 out of 5
1,386 global ratings
How are ratings calculated?
To calculate the overall star rating and percentage breakdown by star, we don’t use a simple average. Instead, our system considers things like how recent a review is and if the reviewer bought the item on Amazon. It also analyzes reviews to verify trustworthiness.

Julia
2.0 out of 5 stars Shallow, over dramatic, and filled with flat, stereotypical characters.
Reviewed in the United States on September 2, 2016
Verified Purchase
I typically always read reviews before ordering a book, however this time the reviews have lead me astray. After I finished this I was surprised to come back here and find almost all positive reviews. I don't know what I missed that everyone else enjoyed, but as a whole, I did not enjoy the Amber Project. I only finished it for two reasons, one that I hate leaving books unfinished, and two that it might possibly get a little better, which it never did. I attempted to avoid super spefic spoilers in my review.

Pros:
Plot and World Setting - The book had a decent Plot and a well thought out World Setting. You could tell the author spent a decent amount of time developing the story and world where it takes place. (However I will point out the entirety of the plot relied a lot on convenience and there were a few plot holes that bothered me. Why would anyone invest the billions of dollars inorder to built this underground city in the first place? Mei just happens to find those disks explainging /everything/ in a random tunnel? The ORTEGO building just happened to be a quick hike from them?)

Pace - The book had a good pace, didn't move too slowly or too quickly, and kept you from getting too bored of one narrative or another.

Ending - The ending was satisfying, interesting and felt complete, while at the same time made you interested in the next book. Despite the fact I hated most of the book, the last few chapters and prologue actually left me with an inkling of interest about the rest of the series.

Cons:
Characters - I think I will disagree with almost every other review out there when I say the characters in this book were terrible. Each was shallow, two-dimensional, predictable and their boring, flat, steriotypical, paper cut out personalities were the worst part of this novel. The only characters I enjoyed were John and Captain Ross, who were also the only characters who showed an ounce of personality.
The main characters were somehow the most flat and personality-less. Terry, the main character was a lackluster, typical nice guy who's only flaw was his "weak" body. But other that considering himself weak, thinking everyone else better than him, and missing his sister, Terry has no other thoughts or personality points throughout the entire book.
His mother as well, who played a main character, has no personality at all other than somewhat considering her son every now and then.
Also, did I happen to miss the descriptions of the characters? Because I had no idea of how anyone looked for the entire series. The only description we got of Mei was she had black hair and thin hips. Thin hips? Why the heck to you mention she had thin hips and not her features, her hieght, or anything else?
Sterotypes also ran rampid in the characters.
Terry: Nice guy main character, insert random flaw to not make him so perfect
John: Strong but dumb best friend
Mei: Black haired smart girl with asian name
Alex: Fat bully

It also felt as if author invited and disposed of characters as it was convenient to the plot.

Writing - All together, the author isn't a bad writer. I would say he is an over dramatic writer. The book was saturated in overdramatic narrative. I'd suspect the author was trying to create grippy sentences that were interested, but instead you had overdramatic one liners, strange pointless cliffhangers, and stuffed in 'thought provoking' paragraphs that did nothing to interest me.

In short, if I could go back and never have ordered this book, and subsequently never wasted hours reading it, I would.
Read more
209 people found this helpful
Helpful
Report abuse

Derk Nerkum
5.0 out of 5 stars Half Political Intrigue, Half Dystopian Adventure Story
Reviewed in the United States on April 20, 2015
Verified Purchase
This book was wild. I read tons of Young Adult dystopian stuff, but I found this to be a bit more mature. It’s not afraid to tackle actual social issues like class-based societies, equal rights, and political espionage while still dealing with the primary story involving the kids. There’s basically two stories happening here. One involves the teens, while the other involves the adults. The primary plot is, of course, about those kids, and it’s a wild adventurous ride with its own challenges to overcome. But the second story with the adults is what I found to be the most fascinating, because it dealt with the previously mentioned issues. At its core, this story is asking a very interesting question: how far would you go to save humanity? For some of the people, there’s no limit, but some disagree and claim we shouldn’t sacrifice our humanity while trying to save it. It’s an issue reflective of the real world, and it’s fascinating.

I also found the world building and societal structure to be interesting. In this world, most women are Mothers. That’s a job, by the way. They produce and raise children. Once those kids are a certain age, they’re sent to the Academy, and the Mothers don’t see their kids again for about 10 years. Then they go out and start a new “contract.” In a world like this, genetic diversity is key, so a Mother has to have a good set of genes in order to get more contracts. The more unique her genetics are, the more children she’s allowed to have. That brings us to the protagonist of the adult story, Mara Echols, who also happens to be Terry’s (the main character’s) Mother.
But don’t get me wrong, Terry is great, too. In fact, his story is the driving force of this novel. We get to follow him on a wild adventure into an untouched wasteland. The ride is incredible and the kids are all very unique.

All that being said, it’ll be interesting to see where the series goes. The ending leaves it so that the writer could take the plot in several directions. Oh, and like some of the other reviews have pointed out, the audio logs were a lot of fun. My favorites were the memoires from S. E. Pepper. You never see her in the actual narrative, but she leaves such an impact that it’s hard not to love her. If you like YA dystopian stuff, this book’s the ticket. It exceeded my expectations, especially because this is Chaney’s first book. Here’s hoping he keeps the quality up.
Read more
78 people found this helpful
Helpful
Report abuse
See all reviews

Ms. A. Traczykowski
5.0 out of 5 stars A Distopian world underground.
Reviewed in the United Kingdom on April 28, 2017
Verified Purchase
Imagine a dead world with a poisonous atmosphere. The last remaining humans have created a new life underground. Woman who are chosen as Mother's raise children until they are seven. The children then have their first birthday, after which they go away to attend school and they never see their Mothers again. The children have been genetically altered in the hope that they can breath the poisonous air on the surface. There are many miscarriages and infant mortality is high, only a few go on to continue their " education" . I loved this book, the last few chapters had a twist at the end making you want to buy the next one in the series just to see what happens next. Brilliant, five stars.
Read more
Report abuse

ER Harding
5.0 out of 5 stars Brilliant
Reviewed in the United Kingdom on May 21, 2019
Verified Purchase
Tracking the story of a group of children who were bred to resist the now-toxic air of Earth, this is exciting stuff and I thoroughly enjoyed it. How the children deal with the challenges thrown up by power-crazed politicians and even treachery amongst themselves is fascinating, and the end is satisfying. I recommend The Amber Project without reservation.
Read more
One person found this helpful
Report abuse

Phoenix
5.0 out of 5 stars Couldn't Put This Down
Reviewed in the United Kingdom on March 13, 2017
Verified Purchase
I've been reading Sci-fi for 30 years and I'm always looking out for new authors, new ideas and books that pull me in and not let me put them down. This is one of those books. Finished it at 03:30 this morning.

Are there some typos? Yip. Does it detract from the quality of the story? Nope. Just pre-empting those detractors who always whinge about typos. So what?! This is a great story.
Read more
3 people found this helpful
Report abuse

Mrs. L. P. Russell
5.0 out of 5 stars THE Amber Project A Distopian Sci_go Novel
Reviewed in the United Kingdom on August 8, 2018
Verified Purchase
By J N Chaney
Brilliant story. Interesting and different.
Makes you think how life could change with all the different experiments and tests in the world.
Really enjoyed reading this novel, will get next one to see what happens to main characters.
Read more
2 people found this helpful
Report abuse

Joey VanB
3.0 out of 5 stars Amber
Reviewed in the United Kingdom on March 6, 2021
Verified Purchase
Doesn't get the green light from me in terms of continuing this. YA saga. I wasn't really expecting a literary masterpiece but the whole thing seemed lacking in style .
Read more
Report abuse
See all reviews