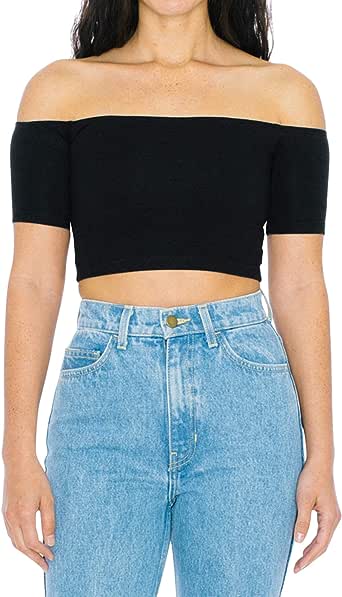 A form-fitting top with off the shoulder design, short sleeves and a cropped length.

If you are a seller for this product, would you like to suggest updates through seller support?
Customer Questions & Answers
See questions and answers

jt
4.0 out of 5 stars In love! New obsession!
February 25, 2016
Verified Purchase
This actually came way earlier than expected! It was estimated to be delivered on March 3, but I got it on February 25! Anyway, I was really nervous about the sizing since I had never bought anything from American Apparel before, nor have I ever tried something on from them. Plus, I tend to not fit most clothes even in real life since I'm 4'11, 95lbs, and have a natural hourglass shape, but I decided to take a chance to size up from my usual XS to S since everyone complained the top being tight in the arms. I also couldn't even decide what color to get! I decided on white (which I'm glad I did since it gives off such a cute and casual vibe that can be matched and dressed any way) just because I bought the American Apparel halter bodysuit in black (and I also struggled on what color and size to order that in too and will also be doing a review on).

Well, I tried it on and was so relieved and happy! The shirt fit perfectly and wasn't tight in an uncomfortable way at all. It was very flattering to my curves, and the sleeves thankfully did not bother me. The only thing that somewhat "bothered" me was that I felt that the hem was a little "loose," but I think I'm just used to wearing very form fitting clothes, which is mostly what I own. It wasn't really loose exactly, but the hem just felt light(?). I don't know how to explain. It's not a big deal though since the hem doesn't actually look like it's too big for my waist or just floating about. Also, the shirt is thin, so your nipples will show if you don't wear a bra (at least in the white, I don't know about the black).

The only real complaint I have is that the shirt had a little dirt/dust on the front and back. There isn't a large amount of it, and it isn't unremovable. But like, I just wished the shirt didn't come with it. You can see it as a line in the middle of the shirt in the photo. I wish I could rate this as a 4.5 since I only didn't like the dirt/dust on the shirt, so I will give this a 4/5. Overall, the shirt fit me well (but I'm a smaller than average person), is comfy, a definite cute closet staple, and the delivery was super fast but delivered a shirt with a little bit of dirt/dust.

Lynsey
4.0 out of 5 stars Very snug
September 18, 2015
Verified Purchase
I am usually a small. (5ft 7in and about 125lbs) after reading the reviews, I ordered a medium and it still was a snug. I don't mind it. I had this idea it was longer but it goes to mid belly length. Got if for a Halloween costume( as Sandy from Grease) probably will still use it.
Read more

Brook
3.0 out of 5 stars Price is too high for the fit
June 7, 2018
Verified Purchase
I have broad shoulders so I always worry about tops like this being too narrow and this one is no exception. I went a size up (large) and it is still too small. I will have to try to stretch it out but the top elastic totally cuts into my shoulders. For reference I am 5’6 and 135 lbs, so I’m not petite but I’m generally a medium size in most clothing.
Read more
Helpful
Comment Report abuse

Lisa Estrella
1.0 out of 5 stars Not good product, not very good seller
June 29, 2015
Verified Purchase
I usually wear x-small tops, I ordered an small one of this top and it's way too small, it's too tight in the sleeves area it was cutting my blood circulation off. So I decided to return this product, and I've been wanting for my refund a little more than a month, I don't know what the seller is wait for.
Read more
2 people found this helpful
Helpful
Comment Report abuse

Katie in NYC
2.0 out of 5 stars Small Arms Only
May 15, 2017
Verified Purchase
This shirt is definitely made for people with smaller arms. I have an athletic build and though it looked great as a whole, the sleeves were just too tight. Also very disappointed that the seller is claiming this product cannot be returned.
Read more
Helpful
Comment Report abuse

Katrina
4.0 out of 5 stars Great Basic Top - Does Run Small
September 14, 2016
Verified Purchase
Really love this top! You can't beat the price and it is so basic, I have worn it alone and over the top of skinny-strapped dresses for extra coverage. I feel like the top does run on the smaller side, but it is a bit stretchy so I would for sure order a size up! Wish they had a ton more colors because I would buy more.
Read more
Helpful
Comment Report abuse

Bria Williams
4.0 out of 5 stars What I ordered!
July 29, 2016
Verified Purchase
This top is really cute. I'm a petite 34D and I brought the largest size. When initially brought it I was a 36D and it did fit snug on the arms and was snug on the chest. But seeing as how I'm in the process of losing weight its fine. The material is thin, but it isn't see thru and its washed fine.
Read more
Helpful
Comment Report abuse
There are 120 customer reviews and 122 customer ratings.
See all 120 customer reviews
Write a customer review